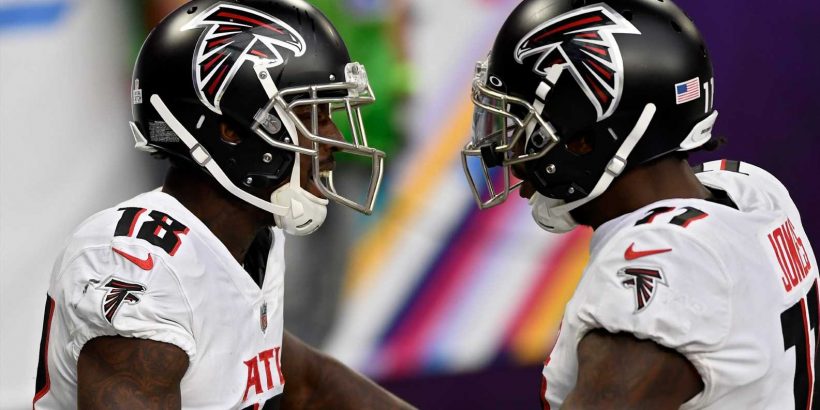 The Falcons made a big move Sunday when they agreed to trade receiver Julio Jones to the Titans for a package highlighted by a second-round draft pick. Jones had been Atlanta’s No. 1 receiver for the better part of the past decade, but now the team has a new No. 1 receiver on the depth chart.

That’s Calvin Ridley. The 2018 first-round draft pick out of Alabama is set to be the top receiving weapon for Matt Ryan and the Falcons in ’21. Rookie Kyle Pitts, the No. 4 overall pick in the 2021 NFL Draft, will be there to help at the tight end spot while Russell Gage showed promise out wide last year.

But, ultimately, a bulk of the pressure to produce and help replace Jones will fall on Ridley.

IYER: Why the Titans are the winners of the Julio Jones trade

Is Ridley ready to be the Falcons’ top receiver? It’s a question worth asking. He has been Jones’ top lieutenant and a productive receiver in his own right through three NFL seasons, but transitions to the No. 1 spot aren’t always easy.

Here’s Ridley’s outlook in his new role and whether he can avoid the pitfalls of what has been, for some, a difficult transition.

How Calvin Ridley has done with and without Julio Jones

We actually have a pretty good sample size of Ridley’s production without Jones. Over the past two seasons, Jones has missed eight games. So in those contests, Ridley served as the top receiving threat for the Falcons.

Generally, Ridley was good as the top receiver. He averaged more than 100 receiving yards per game while soaking up more targets than any of Ryan’s other pass-catchers.

As expected, Ridley’s target share increased when Jones was off the field, and so did his overall production. When comparing Ridley’s performances without Jones to the last eight games in which both he and Jones played at least 50 percent of the offensive snaps, it’s clear that Ridley can still thrive without Jones.

Sure, Ridley’s touchdown production drops substantially without Jones, but that’s partly because teams were able to guard Ridley more closely in the red zone when Jones was out of action. Adding two targets, a catch and 10 yards to his weekly stat line helps to make up for that.

Of course, it is worth noting that Ridley put up a goose egg against the Packers last year in a game that Jones left early. However, that’s less about Ridley’s performance than it is about a great outing from Jaire Alexander, who took pride in his efforts against the young Falcons receiver in an Instagram story.

Maybe teams will game plan against him more, but Ridley looks poised to serve as a quality No. 1 receiver.

Is JuJu Smith-Schuster a cautionary tale for Ridley’s future?

Ridley’s situation is somewhat reminiscent of the Steelers moving on from Antonio Brown and entrusting JuJu Smith-Schuster as their No. 1 receiver.

After Brown requested a trade away from the Steelers, they obliged by sending the former All-Pro to the Raiders to serve as a top target for Derek Carr. In turn, Smith-Schuster would step in to the No. 1 receiver role for Pittsburgh. After a season that saw him post 111 catches, 1,426 yards and seven TDs, many assumed he was ready to be the top receiver for the Steelers.

However, Smith-Schuster didn’t quite live up to the billing. Granted, an injury to Ben Roethlisberger greatly diminished his chances of contributing in 2019, but he only racked up 42 catches, 552 yards and three scores in 12 games for the Steelers.

Even accounting for the unstable quarterback situation, it was a disappointing year for Smith-Schuster, who didn’t look quite as explosive as he had in previous years. He was injured for part of the season, but early on he had his share of issues going up against top cornerbacks who previously would’ve covered Brown.

Smith-Schuster was better in 2020 — he had 97 catches, 831 yards and a career-high nine TDs — but there are still questions about whether he’s a true No. 1 receiver (though he was, once again, hurt by a bad quarterbacking situation and averaged a career-low 8.6 yards per catch as a result). Those questions are part of the reason he returned to Pittsbrugh on a one-year deal instead of landing a multi-year deal in free agency.

Also, Ridley’s a better athlete than the Steelers star, and Matt Ryan is better at this stage of his career than Roethlisberger was in ’19 for the Steelers. Both of those factors should give Ridley a better chance to avoid slumping in his first year as a No. 1 target.

As such, Ridley should be able to continue on an upward trajectory. Or at the very least, he shouldn’t decline in 2021 — provided that he and Ryan can stay healthy.