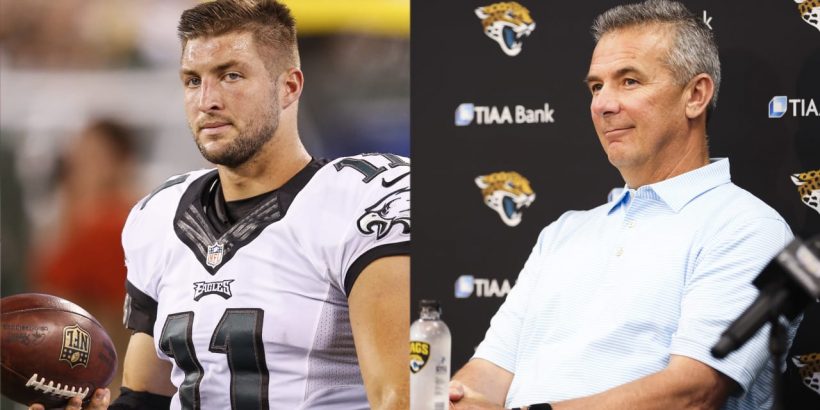 It’s been more than eight years since Tim Tebow last took an NFL snap, but he can still cause a stir or a mania, if you will, like few can.

Just prior to the kickoff of the 2021 NFL Draft, Tebowmania 2.0 began to stir when it was reported the Jacksonville Jaguars and first-year head coach Urban Meyer — Tebow’s college coach at Florida — were flirting with the idea of bringing the 33-year-old in for a shot at playing tight end.

And on Monday, NFL Network Insider Ian Rapoport and NFL Network’s Tom Pelissero reported Tebow was coming to Duval, expected to sign a contract this week or the next.

With many an eyebrow raised and a jaw dropped at the Tebow turn of events, speculation has rumbled and stumbled — much like Tebow’s highlight-reel runs from autumns ago — as to why the Jaguars would travel down this publicity-frenzied road. For Meyer, it was quite simply how Tebow looked in his workouts, which was impressive and years younger than he actually is, that led to him giving his former quarterback a chance at an unlikely comeback.

“We have not signed Tim,” Meyer clarified on the Cris Collinsworth PFF Podcast. “There’s a thought going around. He was in the best shape of his life, asked to see if he could work out with a couple of our coaches. I wasn’t even there. They came back to me and said, ‘Wow, this guy’s in incredible shape.’ Then I went another time and watched them try him out. And they said go work on these things, he comes back later. They try him out again, I’m not there, they come in and they said, ‘Wow, this guy’s ball skills, he’s a great athlete, he looks like he’s 18-years-old, not 20, whatever he is, 33. I said, ‘Guys you don’t understand, now this guy is, he’s the most competitive maniac you’re ever gonna talk to and let’s give it a shot.'”

And therein lies the genesis of Tebow’s improbable journey back into the NFL spotlight, years removed from his last games played and his quest to be an NFL QB.

The tight end position remains one of need for the Jaguars and so too does attention for the Jacksonville franchise, one could surmise.

As aforementioned, Pelissero and Rapoport reported that a deal was likely in the next week or so and Meyer touched on an undefined timeline, as well.

“I have not decided if we’re going to do that yet or not. Getting close,” Meyer said. “I have to make a decision here pretty soon.”

The Jaguars, along with the other 31 teams in the NFL, will have their schedules released Wednesday and then the league usually settles into a sleepy month of May. Apparently Meyer and Co. will keep us awake a bit longer as we await an official decision on the 33-year-old former quarterback/minor league outfielder aiming to be a tight end.

Tebow, whose three NFL seasons of action were matched by the amount of seasons he spent in the New York Mets’ minor league system, impressed Meyer in workouts and it’s all led us here.

﻿Gardner Minshew﻿ is still with the Jacksonville Jaguars, but Minshewmania’s all but been forgotten it seems.

﻿Trevor Lawrence﻿ was selected No. 1 overall by the Jags in the 2021 NFL Draft less than two weeks ago, but the long-haired, long-armed uber-talent’s hype and ballyhoo will apparently wait until a bit later.

The second act of Tebowmania is still running.