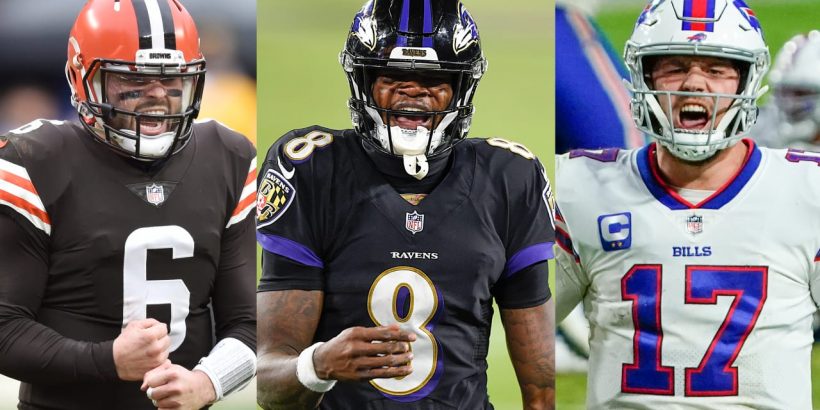 With five quarterbacks taken in the first round — including four in the top 10 — the 2018 NFL Draft was defined by its highly publicized prospects at the game’s most important position. While the ensuing years haven’t exactly gone as planned for Sam Darnold (selected No. 3 overall) or Josh Rosen (No. 10), Baker Mayfield (No. 1), Josh Allen (No. 7) and Lamar Jackson (No. 32) are currently leading three of the eight teams still vying for a spot in Super Bowl LV next month in Tampa, Florida. So, as we hurtle toward this weekend’s Divisional Round …

Which QB from the Class of 2018 will take his team the furthest in these playoffs: Allen, Jackson or Mayfield?

MARC ROSS: Baker Mayfield and the Cleveland Browns enjoyed a magical performance against the Pittsburgh Steelers in the Wild Card Round, but their season will end at the hands of the defending Super Bowl champions on Sunday. So that leaves the matchup between extraordinary talents Lamar Jackson and Josh Allen to determine who is the 2018 draft class king. Though Allen will make plays, ultimately the stark contrast between the Ravens’ dominance in the run game on both sides of the ball (No. 1 run offense, No. 8 run defense) and the Bills’ feebleness in ground play (No. 20 run offense, No. 17 run defense) will carry Jackson and Co. to a spectacular showdown in Kansas City.

JOE THOMAS: This may not be the popular answer, BUT I’m rolling with my man Baker Mayfield﻿. He has played great football over the last half of the season, including in last week’s upset win over Pittsburgh, and his team’s had to deal with the most adversity to get to this point of the postseason. Becoming battle-hardened makes the Browns a team that can deal with the ups and downs of a playoff game, which could give them the edge in close contests. Cleveland is playing with house money and can be free and loose against a Kansas City team that’s feeling all the pressure as the defending Super Bowl champ.

DAVID CARR: When it comes down to it, the teams with the most complete quarterbacks often progress deep into the playoffs. For that reason, Josh Allen is the clear pick over Lamar Jackson and Baker Mayfield to take his team the furthest. His improvement in nearly every aspect of the position over the last year has been critical to the Bills’ success, and his supporting cast is matching his level of play.

MAURICE JONES-DREW: Lamar Jackson got the monkey off his back when he led the Baltimore Ravens to a playoff victory on Super Wild Card Weekend. The lifted weight will allow Jackson to zero in on what he does best: beating defenses with his dynamic running ability. We saw Indianapolis run all over Buffalo’s defense last weekend, which bodes well for Baltimore’s top-ranked rushing attack Saturday night. Jackson and the mostly-healthy Ravens (defense included) should get it done against the Bills, then get a shot to dethrone the Chiefs.

DeANGELO HALL: Josh Allen has all the weapons to thrive at this point in the postseason, with ﻿Stefon Diggs﻿, ﻿Cole Beasley﻿, ﻿Dawson Knox﻿ and others making big play after big play. Everyone’s been exceptional of late, but Allen’s improved decision-making and accuracy over each of his three seasons shouldn’t go overlooked. He has all the tools to enjoy great success in the postseason and will prove as much in the coming weeks.