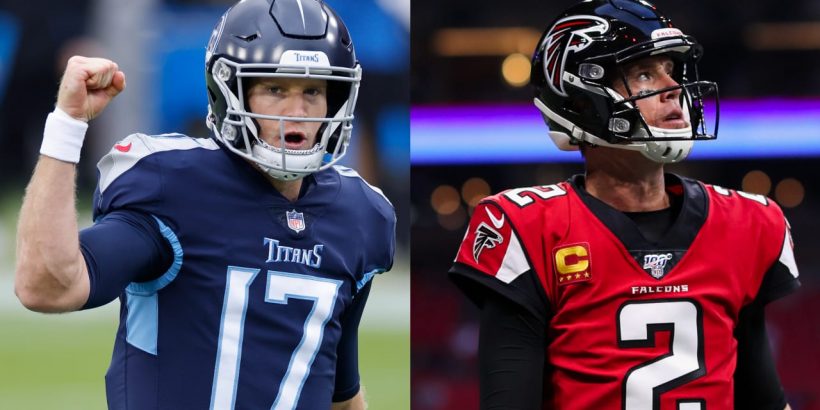 One of the most anticipated deals of the offseason is finally done. The Atlanta Falcons traded star wide receiver ﻿Julio Jones﻿ to the Tennessee Titans on Sunday, which means it is officially time to start breaking down who is most impacted by this move. The 32-year-old Jones is still a player with the potential to have a sizable effect on whatever the Titans hope to do offensively. The only real questions that hovered around him was his ability to stay healthy and the sizable investment that came with his $15.3 million guaranteed salary for this season.

Jones obviously got what he wanted. The seven-time Pro Bowler coveted a fresh start with a legitimate contender. The Titans also found a receiver to combine with blossoming star A.J. Brown while the Falcons received some much needed salary cap relief. We can knock the Falcons for not landing the first-round pick they reportedly wanted in return for Jones — they received a second- and fourth-round pick while also parting with a sixth-round selection — but that price always seemed ridiculously high for a player in his early 30s and a massive contract.

So now we’ll see what Jones can do for a Tennessee team that reached the AFC title game two seasons ago and won the AFC south in 2020. We’ll also get a better sense of the other winners and losers involved in this trade. That’s because this column isn’t just about one player and two teams. It’s about all the other people who will be helped or hurt by a future first-ballot Hall of Famer finally finding a new home.

Derrick Henry: The Titans offense has been all about Henry for the last two seasons. They rode him all the way to that AFC championship Game in 2019 and he ran for a league-high 2,027 yards last season. Adding Jones to the mix means Henry’s job just became a whole lot easier. Henry is accustomed to running against boxes stacked with eight and nine defenders. There’s no way a team can devote that many bodies to stopping the run and keeping him from going off against single coverage. Henry produced consistently when the Titans were relying on younger, less accomplished receivers on the outside. Just watch what he does with a teammate as dangerous as Jones also delivering some serious damage.

Ryan Tannehill: Tannehill has been riding a wave of good fortune ever since he landed in Tennessee via a 2019 trade. He won Comeback Player of the Year honors in his first season with the Titans and produced the best year of his career in his second (when he threw 33 touchdown passes and seven interceptions). Now Tannehill gets Jones added to the offense in his third campaign. It was going to be intriguing to see how the Titans adjusted to some offseason losses in their passing game, as tight end ﻿Jonnu Smith﻿ and wide receiver ﻿Corey Davis﻿ both moved on in free agency. The arrival of Jones means Tannehill has two strong weapons on the outside, which means the play-action pass will be even more explosive in Tennessee this coming season. Tannehill has been one of the best deep passers in football over the past two years. He’s about to get even better.

Terry Fontenot: Fontenot knew he faced a major challenge as soon as he accepted the job as Atlanta’s general manager. The Falcons were mired in salary cap hell and he had an aging star with a huge contract. Jones didn’t help matters when he gave an impromptu nationally televised interview and told FS1’s Shannon Sharpe that he wasn’t planning on coming back to Atlanta, which hurt whatever leverage Fontenot was trying to utilize in negotiations. Ultimately, it would’ve been stunning if Atlanta had received their reported asking price for Jones, which was a first-round pick. A second- and fourth-rounder made way more sense, so Fontenot deserves credit for what he did get out of this contract. He can now sign his team’s draft class. He can think about building an offense around the talents of wide receiver ﻿Calvin Ridley﻿ and tight end ﻿Kyle Pitts﻿, the fourth overall pick in this year’s draft. Fontenot also can start pondering how best to deal with next major challenge: the future of quarterback ﻿Matt Ryan﻿.

A.J. Brown: It’s no secret that Jones wanted this deal to happen. He’s openly talked about the way he’s idolized Jones along with his desire to recruit Jones through social media. Hell, Brown was even open to the idea of giving Jones his jersey number (both players have worn number 11 since coming into the NFL). Like Henry, Brown should love the idea of Jones being in the same huddle this coming fall. Brown has started his NFL career with two straight 1,000-yard receiving seasons and he’s going to see even better matchups with Jones attracting plenty of defensive attention. The third-year receiver also will have the chance to learn plenty from Jones about how to dominate at this level. As Brown said on Twitter shortly after reports of the trade surfaced, “Please excuse my language when I say this ‘y’all done (expletive) up.”

Russell Gage: As much as the Falcons will be leaning on Ridley and Pitts to energize their offense with Jones now departed, they’ll also be looking for more from Gage. The 2018 sixth-round pick has steadily made a name for himself in the NFL, as he’s gone from a player who produced six receptions as a rookie to one who had 72 catches in 2020. More importantly, Gage saw his targets increase dramatically as a lingering hamstring injury plagued Jones throughout the season. There couldn’t be a more opportune time for a player to capitalize on a bigger role in the offense, as Gage is entering the final year of his rookie deal. He’ll have plenty of chances to prove his value with Jones now playing in Tennessee.

Matt Ryan: Ryan is going to miss Jones for a lot of reasons. They spent 10 years together, during which Ryan won a league Most Valuable Player Award and led the Falcons to the Super Bowl (both happened during the 2016 season). Every star quarterback loves having a go-to receiver, and Ryan now will have to adjust to relying on other targets. Of course, it certainly helps that those other targets include Ridley, Pitts and Gage. But Jones made seven Pro Bowls and made life much easier for the Falcons quarterback. His presence is going to be missed.

Arthur Smith: The Falcons’ first-year head coach just lost a major offensive weapon. Smith also doesn’t have all the pieces in place to do what he did as the Titans’ offensive coordinator, when he effectively built a scheme around Henry’s running ability and Tannehill’s passing. When a team needs to throw the ball as much Atlanta will have to in order to succeed, it helps to have players with skills like Jones. As mentioned earlier, Smith will find ways to utilize the talents of his other pass catchers. But it’s best to be patient with the Falcons offense this year, as they figure out what the future looks like without Jones in the fold.

Indianapolis Colts: The Colts felt like the runaway favorite in the AFC South about 24 hours ago. ﻿Carson Wentz﻿ has a great chance of resuscitating his career now that he’s reunited with head coach Frank Reich (who coached Wentz in Philadelphia), and Indianapolis has the kind of running attack and defense that leads to postseason runs. The problem is the Titans just improved immensely with the arrival of Jones. An offense that could’ve been limited by free-agent departures has a real shot of ranking among the league’s best with Henry, Brown and Jones working alongside each other. This isn’t to say the Colts shouldn’t be the betting favorite to take that division this year. It’s that their dreams just became much harder to realize with the Titans trade.

Kyle Shanahan: It was hard to see the 49ers pursuing Jones when talk of a first-round pick being necessary was floating around the league (especially since the 49ers don’t have one for the next two years because of the trade that resulted in them drafting quarterback ﻿Trey Lance﻿). But if the Falcons were willing to deal Jones for a second- and fourth-round pick, the 49ers should’ve been more aggressive. After all, Shanahan was the Falcons’ offensive coordinator (from 2015-16) before taking his current job as the 49ers head coach. Jones also produced some of his best work during that time and the 49ers haven’t exactly been shy about going after deals to improve their team. They executed that blockbuster trade to acquire Lance, made 32-year-old ﻿Trent Williams﻿ the highest-paid offensive lineman in football and called the Green Bay Packers when word leaked about ﻿Aaron Rodgers﻿ being unhappy there. Taking a run at Jones seemed to make a lot of sense given their current approach to doing business.

Every cornerback on the Titans’ schedule: There’s been a lot said about Jones and the way his 2020 season ended. That hamstring injury limited him to only nine games and raised questions about whether he was starting his decline. But let’s not forget that ﻿Randy Moss﻿ was supposed to be heading downhill in 2007, when the New England Patriots traded for him as he prepared for his 10th NFL season. All Moss did was produce one of the greatest seasons ever by a receiver, finishing that year with a league-record 23 touchdown catches. Jones is entering his 11th season under similar scrutiny. He’s likely to show the rest of the league that he’s still plenty capable of dominating when the opportunities arise.