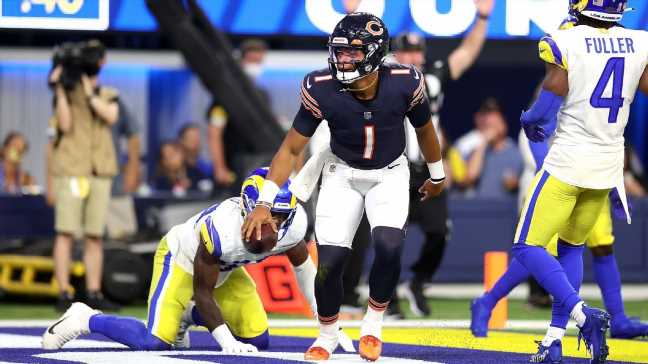 INGLEWOOD, Calif. — It took just a handful of snaps until Chicago Bears rookie quarterback Justin Fields made an impact in Sunday night’s opener against the Los Angeles Rams.

Bears head coach Matt Nagy had periodically inserted Fields into the game over the first two-and-a-half quarters before Chicago brought in their first-round pick with the football on the Rams’ 3-yard line late in the third quarter.

Fields took the snap out of shotgun and faked a handoff to running back Damien Williams before Fields pulled the ball back, ran to the right and cut up-field to beat the Rams defense for a 3-yard touchdown to pull the Bears within 20-14.

Earlier in the opening half, Fields completed a 9-yard pass in the red zone.