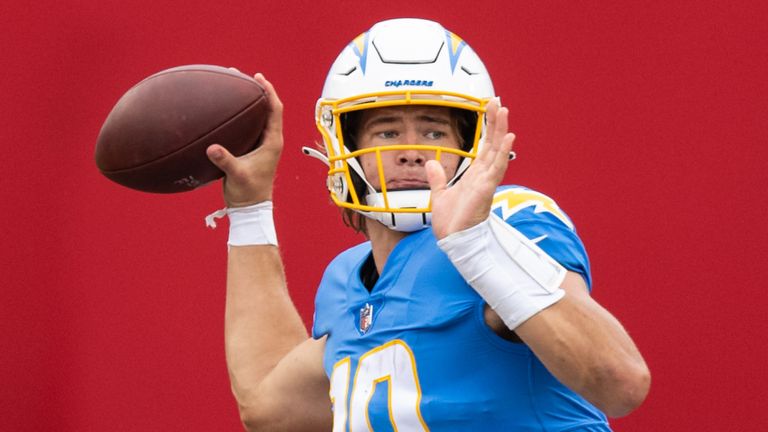 And so it was Thursday, October 5 that it became official. A new era finally began in Los Angeles as Justin Herbert was named starting quarterback of the Chargers.

In the end, the rookie had made it impossible for head coach Anthony Lynn to overlook his fine audition in favour of his long-rehearsed loyalty to Tyrod Taylor, whose veteran experience had traditionally seen him inherit the role of mentor to Herbert. That tutelage will now have to continue on the practice field.

It’s nothing less than Herbert has deserved, for this quiet and self-effacing Eugene, Oregon native has looked every bit the franchise quarterback the Chargers invested the sixth overall pick in earlier this year. When the opportunity presented itself in the wake of injury to Taylor, he didn’t turn it down.

“He got thrown in the fire,” said Lynn. “I thought he handled the situation well and I want to see more of him.

“It’s not going to be a situation where he’s looking over his shoulder. He’s our starting quarterback. He makes a bad play, he has a bad game, he’s our quarterback.” While Herbert was deemed the most physically-gifted quarterback coming out of college in 2019, he also proved to be one of the most divisive.

His measurables were tantalising and screamed NFL ready. Standing at six-foot-six, 236 pounds, this burly specimen offered an athleticism rivalled by few others in his position class and packed a well-advertised canon for an arm. Ducks wide receivers would often vouch for the extra zing to his passes that tested their cushion hands on a weekly basis.

He finished second in Oregon history with touchdown passes and passing yards, was the program’s all-time leader in completions, is one of just two players in Ducks history to put up two successive 3,000 yard passing seasons and produced a second-most nine 300-yard games. “Physically, there’s not a throw that he can’t make. Not only that he can’t make, but that he can do better than everybody else. He’s done some things on the field that I would look over and you know when you have a whistle half way hanging out of your mouth going ‘What? Did that just happen?'”

Alongside the recognition of his willingness to attack downfield, his ability to hurt teams with his legs and poise in the pocket came question marks over his potential as a long-term NFL starter.

His arm strength covered for accuracy issues at times, while his touch and precision fell short of matching a Joe Burrow or Tua Tagovailoa.

November’s 31-28 loss to Arizona State alluded to those concerns as Herbert went 20 of 36 for 304 yards, two touchdowns and two interceptions. Two picks could have been more, one play seeing Herbert overthrow his wide-open receiver on third and long for what should have been an easy first down.

Stretching the field wasn’t a problem, instead it was Herbert’s reliability when it came to popping short and intermediate throws that invited doubts. That being said, he was also short of elite talent around him, his receivers notably dropping 32 catchable passes last season.

Leadership was another factor that came under scrutiny. Herbert doesn’t fit the brash, alpha male quarterback stereotype nor has he made a name for himself for being a talker. He was quiet and had barely stepped foot outside of Oregon, having grown up 10 minutes from the Ducks’ Autzen Stadium.

With that in mind, Los Angeles, already containing headline stars from other teams, emerged as something of a logical market in comparison to the more pressurised environment that perhaps would have awaited were he drafted by the Miami Dolphins.

Would he be able to walk in and command an NFL locker room? Coach Cristobal and a number of people at Oregon believed so, even if outsiders didn’t.

“It was more than roll my eyes, I was offended,” said Cristobal in response to doubts over Herbert’s leadership. “I’m like, ‘Whoa.’ How many of the critics have been in the huddle or on the sideline?

“How many have been there when (he was) a freshman taking over a team with a 4-8 record and have to play with a freshman offensive line and a bunch of new guys, go through coaching changes, go through coordinator changes, and just stick with it through injury and end up winning the Pac-12? And winning the Rose Bowl?” It’s been a baptism of fire for the 22-year-old, who stepped in under center at last minute in Week Two when Taylor suffered what was later revealed as a punctured lung caused by the team doctor’s attempt to administer a pain-killing injection to his cracked ribs.

Both his poise and preparation became evident. In his first game Herbert made the Chiefs defense look very average in stages and forced Patrick Mahomes to beat him in overtime, before throwing for over 300 yards for the second straight week as the Chargers were beaten by the Carolina Panthers. 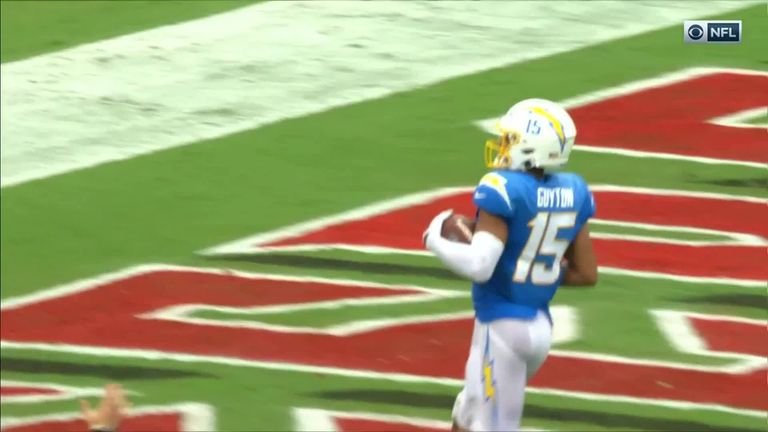 He then went toe-to-toe with the Tampa Bay Buccaneers and Tom Brady, who became the oldest player in NFL history to throw five touchdown passes in a game. Herbert had flaunted his arm strength that day with a perfectly-weighted 72-yard touchdown pass to Jalen Guyton.

Three starts have amounted to three defeats, not that the Chargers will be too worried. They have found their man. It’s arguably been Gus Bradley’s defensive unit that has disappointed thus far.

Herbert has 931 passing yards so far this season, putting him second for a rookie in his first three games since the merger behind only Cam Newton’s 1,012 in 2011.

“I think Justin Herbert looks fantastic. He’s played the best quarterbacks in the league, he’s played Patrick Mahomes, Tom Brady and then this week he gets Drew Brees,” said former NFL coach Rob Ryan on Inside the Huddle.

“There’s usually not a Hall of Famer across the field that you’ve got to try and duplicate but he’s done a fantastic job.

“How many rookies show the poise this kid does? He gets back there, he’s big, he stands tall, he runs the football, he’s athletic, he’s got the huge arm. This kid looks fantastic.” “Is he the future? Oh yeah, the future looks bright in LA. This is a big stage for a kid who is 22 years-old, he doesn’t know any better and he looks fantastic.”

Herbert has been hurried a joint-third most 21 times and pressured a ninth-most 37 times so far this year, and yet his poise has been largely unflinching.

The playmaking ability has also been undeniable, the first-round pick leading an 80-yard, 10 play drive late in the game against the Panthers that probably should have ended in a game-winning touchdown, with Austin Ekeler unable to keep control of the lateral from Keenan Allen.

On the first series of his NFL career against the Chiefs Herbert orchestrated an eight-play, 79-yard drive ending in a four-yard touchdown run. Mature decision-making was on display later in the half when Herbert acknowledged cornerback Rashad Fenton biting on the presence of Allen and tossing a 14-yard touchdown pass to the back shoulder of a wide-open Guyton.

“Impressed, but not surprised,” coach Cristobal said of Herbert’s debut. “We all know, you’ve seen enough film of him, him live, you’ve seen him do stuff in practice that he’s going to carry that stuff over and have an unbelievable career.

“So excited for him, so happy for him. You can tell that the team really respects him, appreciates him and want to play hard for him. That was awesome, that really was.”

Making the team his Optimism surrounding Herbert’s bright start is boosted by the idea the Chargers and coach Lynn are yet to fully unleash him.

Alongside the ‘wow’ throws, Herbert has had success in getting the ball out quickly to Austin Ekeler or Joshua Kelley on checkdowns and allowing them to go to work.

Lynn adopting a run-first approach is likely to be a reflection of Ekeler’s prominent role and his efforts to take added caution with his quarterback, as opposed to lacking trust in his man under center.

Herbert is currently 21 of 26 for 305 yards on third down, but as the weeks go by the Chargers will need to test what he is capable of doing with the ball in hand on first down.

He is, meanwhile, 29th with 772 intended air yards, which will no doubt rise as Herbert grows in confidence and the Chargers give him greater license to make use of his deep ball. 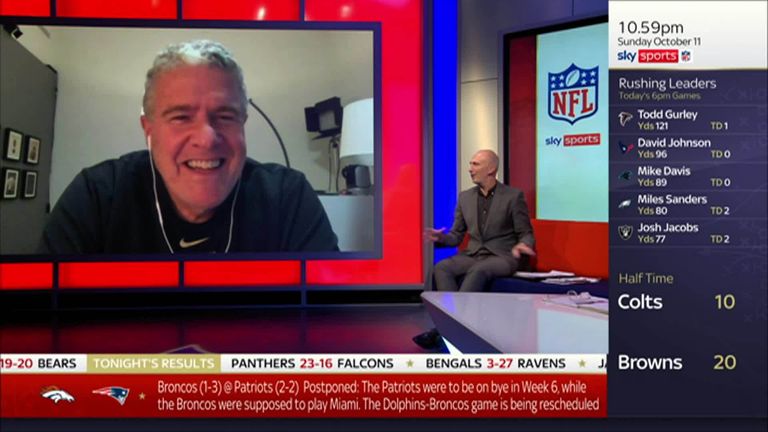 It will be interesting to see now how the loss of Ekeler to injury for the next month or so impacts Herbert’s role and the Chargers’ approach with him on first down.

A dent to the running game may also encourage Lynn to exploit the threat of Herbert on the ground, which Oregon utilised sporadically. He has 47 yards rushing and a touchdown on 12 carries and has scrambled just seven times so far this season.

He has become a leader in his own right through his production and given the Chargers good reason to believe they are set at quarterback for the next decade.

Watch the Chargers @ Saints live on Sky Sports NFL from 1:15am in the early hours of Tuesday morning

Sky Sports NFL will be your dedicated channel for NFL coverage through the season – featuring a host of NFL Network programming, a new weekly preview show as well as at least five games a week and NFL Redzone, you won’t miss a moment. Don’t forget to follow us on skysports.com/nfl, our Twitter account @SkySportsNFL & Sky Sports – on the go!