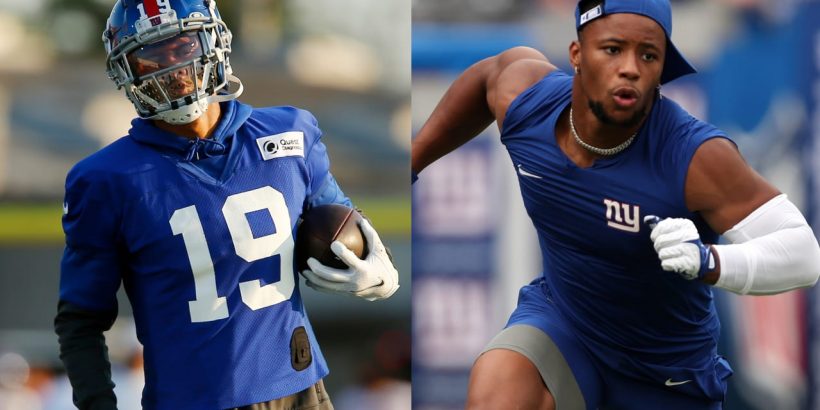 The Giants have been cautiously optimistic about the return of ﻿Saquon Barkley﻿. His new teammate echoed the same prudence when speaking with reporters Thursday.

﻿Kenny Golladay﻿ is in New York as the Giants’ new No. 1 receiver and believes his team is headed toward great things. It just might not be apparent in Week 1.

“I mean, I’m excited. When I look in the huddle and see all those guys, it’s very exciting,” Golladay said Thursday. “But people have been in and out of the lineup, so we’re going to be a little probably slow to get off. But we’ve got some workers on this team and I feel like if we put the work in, I feel like we can be really special.”

When he speaks of guys being in and out of the lineup, Golladay is referring at least partially to himself. Golladay completed his first practice Thursday following a hamstring injury suffered in early August that kept him out of action for most of the month.

Another one of those players who is just now returning to the practice field is Barkley, who suffered a knee injury that robbed him of nearly his entire 2020 campaign. His return back to the field has been intentionally slow, but it sounds as if he’s almost back to full participation.

Barkley practiced Thursday, getting some legitimate reps while also ensuring he’s not risking anything with the start of the season a little over a week away.

“We did a normal practice safely, and just talked to the guys and (they) gave me some good shots,” Barkley said, via team transcript. “But it’s (about) route-running and running routes just to get me back in the flow of things.”

Barkley certainly needs to get his feet fully under him before pushing the throttle. New York can’t afford a setback with its star running back, especially after the Giants were forced to forge ahead without him in 2020.

﻿Daniel Jones﻿ is entering a pivotal third year and needs all the help he can get. Significant assistance could be provided by a healthy Barkley, but not without full confidence in the strength and stability of his knee. The same goes for Golladay, New York’s big offseason signing, and his hamstring.

“I had a run and I thought about it and I was like, ‘That’s kind of like the first time I’ve really carried the ball in that situation since the time I hurt my knee,'” Barkley said. “Still just taking it one day at a time.”

Slow and steady is the proper approach for the Giants with Barkley. We should expect more practices like Thursday’s, which just might lead to a Week 1 debut for the star back. He can expect to see Golladay out there with him, even if it doesn’t immediately produce high-flying victories.