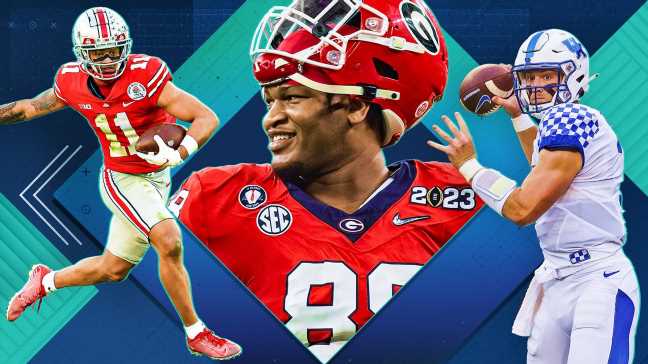 Mel Kiper has served as an NFL draft analyst for ESPN since 1984. He is a regular contributor on SportsCenter and ESPN Radio and writes weekly for ESPN Insider.

Who’s ready for another NFL draft with quarterback intrigue at the top? We lost a little bit of that last year, with Kenny Pickett the only passer who went in the first two rounds. Well, as you’ll see below in my first mock draft for the 2023 class, there’s sure to be plenty of buzz around these signal-callers.

With two rounds of the NFL playoffs down, the order for the top 27 picks is set. It’s a little bit different this year because the Dolphins were stripped of their first-round selection for tampering violations, which means there are only 31 picks in Round 1. The Bears have the No. 1 pick, while the Texans, Seahawks, Lions and Eagles have two first-rounders. Could we see a trade to the top of the board?

Let’s get into my early projections for the first round of April’s draft. I’m not going to project any trades here — it’s still a little bit early to assess which teams could move up and what it would take to get there. As I’ve said before, this is merely an exercise to show you all what I’m thinking three months out from the draft, based on my Big Board rankings and what I’m hearing from execs, scouts and coaches in the league. Everyone is now gearing up for the Senior Bowl next week and the combine in early March.

Here we go, starting with Chicago at No. 1. I’m going to use ESPN’s Football Power Index to project pick Nos. 28-31, and that model has the Chiefs beating the Eagles in the Super Bowl. Check out the “SportsCenter Special: Mel Kiper’s NFL Mock Draft 1.0” at 5 p.m. ET on ESPN2 on Wednesday, and you can see me and my pal Todd McShay going through all 31 picks.