Never write off your chances in the NFL. On Sunday night at the University of Phoenix Stadium, that mantra was in full effect once again as Kyler Murray and DeAndre Hopkins combined for a game-winning touchdown in the final seconds that made instant headlines, memes and more.

An NFL season that has been full of comebacks and shoot-outs had its latest headline-grabbing moment when the Arizona Cardinals beat the Buffalo Bills with the last play of the game.

The Bills had looked set to steal an already-thrilling contest when their quarterback Josh Allen launched a 21-yard scoring pass to Stefon Diggs with 34 seconds remaining for a go-ahead touchdown that put the visitors 30-26 in front and looked to have ended the Cardinals’ hopes of completing a comeback win.

However, Murray and the electric Arizona offense, who have already engineered some mesmerising plays this year, unleashed their finest response yet to win the contest with time expiring. And while Murray was the architect, it was Hopkins who made the catch that saw social media explode.

Murray had moved the ball to around halfway with 14, nine and nine-yard passes to Andy Isabella, Hopkins and Larry Fitzgerald. Those plays left him with no choice in the final seconds other than to hurl a Hail Mary – or a ‘Hail Murray’ as it’ is now being called.

“I’m still kind of at a loss for words,” said Arizona coach Kliff Kingsbury after the game.

“What a phenomenal play – I kept asking our guys, ‘Did he catch it?'” 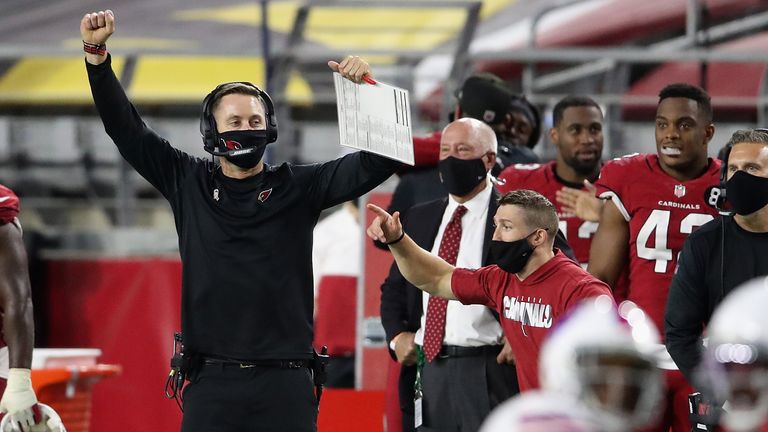 Catch it Hopkins did, winning the game, catapulting the Cardinals into first place in the NFC West and cementing his place as arguably the best wide receiver in the game.

“Any time they throw the ball and he is around it, you get nervous – and that’s why,” Bills receiver Cole Beasley said.

Hopkins finished with seven catches for 127 yards but having climbed above Jordan Poyer, Micah Hyde and Tre’Davious White to haul in Murray’s 43-yarder, the 28-year-old labelled it the best of his career.

“It was on three people, they were in position. It was just a better catch by I,” he told reporters.

EVERY ANGLE OF THE PLAY OF THE [email protected] x #RedSea pic.twitter.com/KSc0g2CTlm

That it was Murray and Hopkins, in a team masterminded by Kingsbury, was fitting for the perhaps the most spellbinding play of the opening 10 weeks of the season.

Kingsbury is the head coach whose appointment was a shock given his scheme and his indifferent college record. He was also the coach that gave the green light for the franchise to select Murray with the No 1 pick in the 2019 Draft – one year on from selecting Josh Rosen with the 10th pick.

While watching the Hail Murray, @K1 walks me through how it happened over the phone.
“Never had a moment like this,” he said.
And there’s a surprise.
Will have my column posted by 3:30 am ET. pic.twitter.com/3JIjxwsVDa

Rosen moved on and Murray has gone from strength-to-strength. In addition to his game-winning pass to Hopkins, he also rushed for two touchdowns on Sunday. He has now run for at least one touchdown in five consecutive games, tying a franchise record and becoming the first quarterback in the NFL to do it since Green Bay’s Tobin Rote in 1956.

“The game is on the line, I can’t get tackled here. There was no chance he was tackling me, no chance,” Murray told NBC’s Peter King for his Football Morning in America column while talking through the highlights.

“I’ve never done a Hail Mary before. Obviously in that situation, you can’t overthrow it. I felt really good about it when it left my hand. I knew it would get to the end zone.”

Hopkins for his part is new to the Cardinals having joined in March following a trade which stunned the NFL almost as much as his latest catch.

Arizona gave up fourth- and second-round picks, along with injury-plagued running back David Johnson to acquire the wide-out in a trade with the Houston Texans that baffled most observers but now looks to have equipped the franchise with the perfect successor to Fitzgerald and given Murray the perfect weapon in his early NFL years.

Yes, it was one catch in one game and there are still eight weeks of the regular season to go, but the win vaults the Cardinals firmly into the race for the NFC West title with a fourth win from their last five matches. Each victory has been more dramatic than the last.

That's why you trade for @DeAndreHopkins

When in doubt throw to D Hop!!
What a way to win! @AZCardinals #RiseUpRedSea

Victory takes Arizona to 6-3 for the season, the same as their divisional rivals the Los Angeles Rams and the Seattle Seahawks. The Rams beat the Seahawks on Sunday night and the Cardinals play the Rams twice in their final five matches – it is a division that will most likely go to the wire.

Attention now switches to Week 11 and the mouthwatering Thursday Night Football opener – Arizona at Seattle in a game that will put the winner a game clear at the top of the division.

There is history, too. Just three weeks ago, Murray ended the Seahawks five-game perfect start in Week Seven with a 37-34 overtime victory, and with Murray and Hopkins in the mood anything is possible. “[Murray] is playing at a ridiculous level, you have seen it the last few weeks after that first month,” Kingsbury added.

“Offensively, we have really settled in. Mixing in tempo making great decisions whether it is with his feet, his arm. It is fun to watch, he is making us right on a lot of plays.”

But for now, it’s all about Hopkins’ Hail Mary catch, one that stunned the sports world on Sunday night.