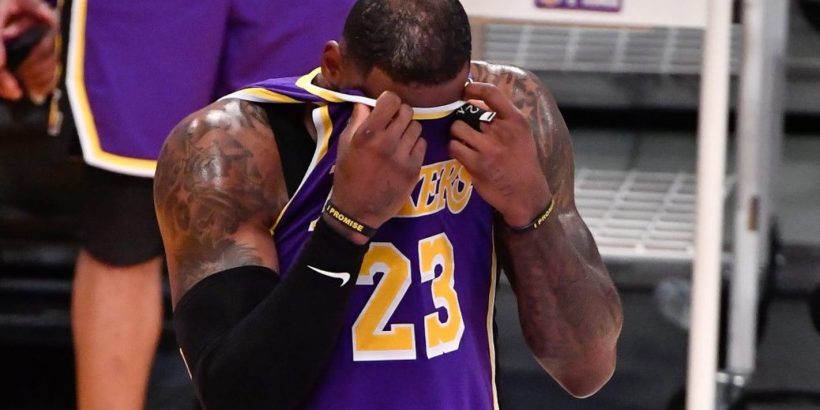 This is the Morning Win, by Andy Nesbitt.

LeBron James and the Los Angeles Lakers are not it a good place right now and seems like they might actually be pressing the panic button after Sunday night’s loss (their sixth loss in their last seven games) to the Raptors dropped them to the sixth spot in the Western Conference.

The Lakers are tied with the Trail Blazers but have that No. 6 spot due to owning a tie-breaker over Portland. But even so, they are on the edge of having to play in the NBA’s play-in tournament, which will see the No. 7 through No. 10 seeds battle it out for the last two spots in the playoffs.

Does the idea of that intrigue LeBron? No, no it doesn’t. Sunday night he said: “Whoever came up with that (expletive) needs to be fired.”

The Lakers’ 121-114 loss to the Raptors was an ugly one and could lead to more ugly ones. The Raptors are 27-38 and far from a playoff team. That it happened at home with LeBron and Anthony Davis in the lineup is not great. And now tonight they host the Nuggets in a game that LeBron might not even play in because his ankle, which kept him out of the last seven minutes of Sunday’s loss.

So yeah, things could continue to get a lot worse for the Lakers.

LeBron bashing the play-in tourney, though, is pretty lame. The league put this in last season and it was so much darn fun. This year the No. 7 and 8 teams play each other while the No. 9 and 10 seeds will square off. The 7 and 8 seeds will each have two chances to win just one game to punch their ticket to the playoffs, which shouldn’t be too hard and if you can’t do that then you don’t really belong in the playoffs anyways. Here’s a full explainer of the format from the NBA.

If you don’t want to play in that then you just need to play better during the regular season, it’s that simple.

The NBA put this in because the league saw just how much excitement this format created last season. Fans loved it and it made for great TV and let’s be honest – the No. 9 and 10 seeds really shouldn’t be a challenge for the No. 7 and 8 seeds or be significant factors in the playoffs.

LeBron ripping it just looks like he and the Lakers aren’t very sure of themselves right now and wouldn’t want to risk seeing their season come to an abrupt end thanks to a few losses in the play-in round. You have to think the ratings for a Lakers’ play-in game would be really high, though, which the NBA would love.

– NFL fans had lots of jokes about Tom Brady and Aaron Rodgers being at the Kentucky Derby on Saturday.

— Patrick Mahomes had a funny reaction to seeing that Michael Vick recently ran a 4.7 40.

– Panthers sixth-round pick Thomas Fletcher had an amazing phone call with his new head coach after he was selected.

– A mic’d-up P.J. Tucker complimenting Kevin Durant after getting scored on is too good.