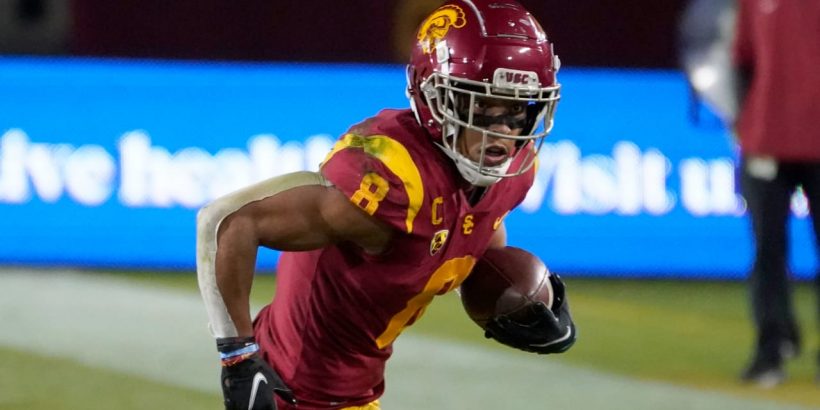 Amon-Ra St. Brown fell all the way into Day 3 of the NFL draft, waiting until the fourth round to hear his name called. When the Detroit Lions plucked the slot receiver from USC, it provided St. Brown the chance to make an impact immediately.

The Lions’ revamped receiving corps doesn’t include an alpha. ﻿Tyrell Williams﻿ is the most accomplished wideout, with one 1,000-yard season early in his career, but didn’t play at all in 2020; ﻿Breshad Perriman﻿ is a former first-round pick who’s never been consistent; ﻿Quintez Cephus﻿ had a solid rookie campaign but profiles as a depth player; and ﻿Kalif Raymond﻿ has never been a full-time receiver.

The door is open for St. Brown to generate a massive target-share for a mid-round rookie.

During rookie camp, St. Brown reportedly lined up both outside and in the slot. He profiles as an inside receiver with Perriman and Williams on the outside. Given the dearth of options in Detroit, St. Brown could become ﻿Jared Goff﻿’s new ﻿Cooper Kupp﻿ — a trusty playmaker who can get open quickly from the slot and be an outlet — if he picks up the offense with ease.

Projected by many as a Day 2 draft pick, St. Brown falling to the fourth round provided the Lions rookie wideout with the motivation to prove the doubters wrong. He told reporters he knows the names of all 15 receivers drafted ahead of him in 2021.

“I’m never going to forget the 15 receivers that went before me in the draft,” St. Brown said. “That’s kind of the chip that I have on my shoulder coming in, everything that I do. Whenever I’m thinking about anything, that just comes back to my mind and it just motivates me to do more.”

In a star-studded receiver group, which saw five wideouts selected in the first round, St. Brown will have a hill to climb to prove the rest of the league wrong for passing. Fortunately for the USC product, he should have plenty of opportunity in Detroit to thrive and use that chip as motivation.