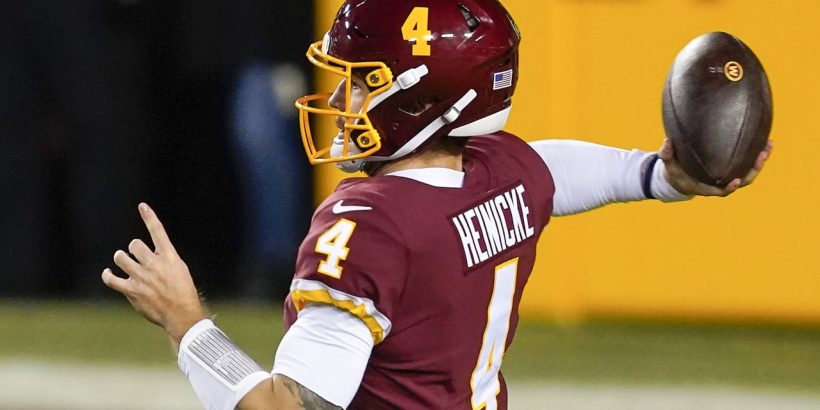 We’ve reached the point in the season when things stop being new. We’ve formed educated opinions on players. We’ve learned which teams we can target and which ones we can avoid. So it gets easier, right?

You must be new here.

Of course, it doesn’t get any easier. Consider me grateful for that. Otherwise, I’d probably be out of a gig. And I like eating, so we don’t need any of that to happen. If anything, this is when it gets harder. Injuries are piling up and teams are on byes. Players who were surprising at the start of the year are now just expected to produce every week. (Looking at you, ﻿Cordarrelle Patterson﻿.)

But you didn’t come here to hear (read) me whining. You want sleepers. Enough out of me. Let’s list off some names!

If I haven’t yet hit the limit on how many times I can include ﻿Taylor Heinicke﻿ *in this column, then I’m probably close. Since taking over for ﻿Ryan Fitzpatrick﻿, Heinicke has been a solid streaming option. He ranks as a top 12 fantasy quarterback over the past four weeks and has excelled in favorable matchups. He’s got one of those this week against the Chiefs. Kansas City’s defense has been equally putrid on the ground and through the air. What works in Heinicke’s favor is that Washington’s defense has also been ungood this year. Look for both offenses to be very aerial in a potential high-scoring contest.*

Darrel Williams will be a popular name off waivers this week. The veteran backup will take over as Kansas City’s starter in place of ﻿Clyde Edwards-Helaire﻿. If you were able to snag Williams, there’s no time like the present to get him in your lineup. Did I mention that Washington’s defense has been bad? Because … yeah. The Football Team has allowed six receiving touchdowns to running backs, which seems pertinent when discussing a running back who could see a fair number of targets.

Don’t look now, but ﻿Carson Wentz﻿ has been steady. His 22.58 fantasy points against the Ravens on Monday night were the most he’s scored all year. But he’s had a consistent floor of around 17.5 points this season. This week, he faces the Texans. To be fair, Houston’s defense hasn’t been awful. It also hasn’t been great. Of the five quarterbacks to face the Texans, only ﻿Mac Jones﻿ didn’t reach 17 fantasy points. Wentz is a solid streamer this week.

Staying on the streaming tip, managers in deep leagues should consider ﻿Mo Alie-Cox﻿. Wentz has never been afraid to target his tight ends. Over the past two weeks, Alie-Cox has boasted a 13.6% target share. More than both ﻿Jonathan Taylor﻿ and pass-catching specialist ﻿Nyheim Hines﻿. No defense has allowed more fantasy points per game to tight ends.

While we’re talking here, let’s give a shout out to the Colts DST. They’re a top 10 defense that has been solid all year. Yes, they had their worst performance of the season on Monday against the Ravens. That happens when you’re facing ﻿Lamar Jackson﻿. Good news! ﻿Davis Mills﻿ is decidedly not Lamar Jackson. Last week’s surprising performance against the Patriots feels like a mirage. We’re still taking our shots against the Houston defense until we’re proven wrong again.

It doesn’t look like ﻿Zach Ertz﻿ is going anywhere. Months of trade rumors have quieted, and Ertz has resumed his usually role in Philly’s offense. That role could get bigger this week with ﻿Dallas Goedert﻿ on the reserve/COVID-19 list and not expected to play on Thursday night. We’ve preached starting your pass-catchers against a Buccaneers defense that has allowed the most passing yards and third-most passing touchdowns this season.

Lots of fantasy managers gave up on ﻿Myles Gaskin﻿ after a poor start to the season. Many of those same managers might want to consider getting back on board — at least for this week. A contest against the Jaguars is too good to pass up. Jacksonville has the NFL’s 20th-ranked run defense while giving up nine rushing scores — tied for the most in the league. Gaskin’s target share might not be the same if ﻿Tua Tagovailoa﻿ returns in Week 6 but if his usage mirrors what Miami did last week, opportunities should be plentiful.

It’s gotten harder to make a case for ﻿Evan Engram﻿. Alas, for this week, I shall try. He’s had a nearly 15% target share in the past three weeks. He’s also had a 68% catch rate, which would be the second highest of his career if he can sustain it. Yet the biggest thing working in Engram’s favor is the number of injuries the Giants are dealing with. We’ll wait to see what happens with ﻿Sterling Shepard﻿, ﻿Darius Slayton﻿ and ﻿Kenny Golladay﻿ this week, but if any of them are missing, Engram should have a solid target share once again.

No one has talked about the Steelers passing game this year except to say that it’s been bad. But this week offers hope for ﻿Ben Roethlisberger﻿. The Seahawks defense has been an eyesore again this year, surrendering the third-most passing yards through the first five weeks. Pittsburgh’s passing game has looked like a series of extended handoffs for much of the year. This is an opportunity for Big Ben to try pushing the ball downfield. If it doesn’t work out this week, we can likely forget about Roethlisberger for the remainder of the year. This is also a chance to double down on ﻿Pat Freiermuth﻿. He was listed in this space a couple of weeks ago. It ended poorly. But the matchup is in his favor. Never let it be said we give up easily.

Marcas Grant is a fantasy analyst for NFL.com and a man who hits with men in scoring position. Send him your statistical superlatives or fantasy football questions onTwitter@MarcasGor TikTok atmarcasgrant.