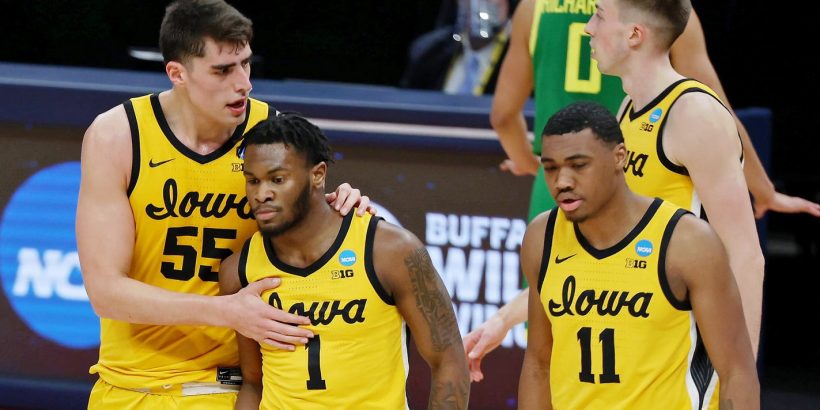 Following yet another crushing defeat for a top seed Monday – No. 2 Iowa's 95-80 loss to No. 7 Oregon – the narrative of underachievement continues for the Big Ten Conference.

The Big Ten is 6-7 in March Madness, a record that would be considered one of the worst in history since the men's NCAA Tournament expanded in 1985. The conference went 0-3 on Sunday.

The Big Ten was considered by far to be the best league in the country this season, leading the NET conference rankings by a landslide over the SEC and Big 12. The conference sent an NCAA-best nine teams to the Big Dance, with two No. 1 seeds and two No. 2 seeds. But of those nine, only three of them still are dancing. And only one of those top seeds, Michigan, is still standing. The Wolverines play LSU on Monday (7:10 p.m. ET, CBS).

On Sunday, No. 1 seed Illinois lost to No. 8 Loyola Chicago, No. 10 Rutgers blew a lead to fall vs. No. 2 Houston and No. 9 Wisconsin came up short against top-seeded Baylor. That's coming on the heels of the Big Ten being on the wrong side of the two biggest upsets of the first round (Oral Roberts over No. 2 Ohio State and North Texas over No. 4 Purdue).

There's a very realistic chance that zero Big Ten teams make it to the Sweet 16 at the end of Monday, which is just a staggering notion considering the hype the league received on Selection Sunday. Maryland, a No. 10 seed, is an underdog against No. 2 Alabama, and No. 1 seed Michigan is vulnerable to lose to No. 8 LSU with one of its top players (Isaiah Livers) out to injury.

What happened? March Madness happened. How tough a league is all year matters little when the matchups are drawn out in a single-elimination tourney. The Pac-12 finished sixth in NET conference rankings and sent five teams dancing. The league is 7-0 in this tournament with No. 12 seeded Oregon State in the Sweet 16 already, joining Oregon. Southern California (plays Kansas), Colorado (plays Florida State), and UCLA (plays Abilene Christian) have opportunities to add to that count.