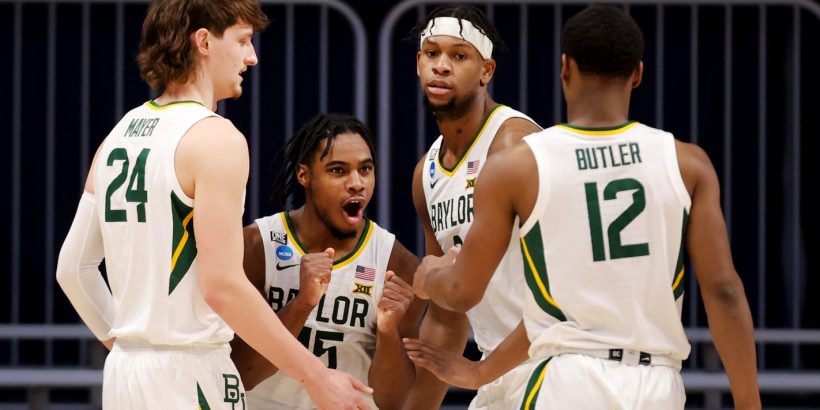 The first two rounds of the men's NCAA Tournament trimmed the 64 teams to 16, and there was a record number of bracket-busting upsets this year that have made the madness extra maddening this March.

Now, those survivors will square off Saturday through Tuesday in the Sweet 16 and Elite Eight with a slot in the Final Four on the line.

But which of these teams are cut out for the second weekend of March Madness? Which of them has the best chance to cut down the nets in Indianapolis? USA TODAY Sports ranks the Sweet 16 teams based on potential of winning the national championship.

No. 1 seed. The Bulldogs (28-0) have so many offensive weapons, whether it's Corey Kispert (19.3 ppg, 46% from three-point range) on the wing, Drew Timme (30 points, 13 rebounds vs. Oklahoma) in the post or freshman guard Jalen Suggs (14 ppg, 4.4 apg) running point. This nation's leading offense (averaging 92.1 points) is as good as it gets. Coach Mark Few has a shot at winning his first national championship, but it needs to be defense – where the 'Zags rank eighth nationally in KenPom.com efficiency ratings – that propels any net-cutting.

Davion Mitchell of Baylor reacts with his teammates during the first half against Wisconsin in their second-round game at Hinkle Fieldhouse. (Photo: Gregory Shamus, Getty Images)

No. 2 seed. The Crimson Tide (26-6) rolled through the SEC — the second-best conference in the nation this year, per NET rankings — and have shown signs of being even better in the NCAA Tournament. Coach Nate Oats has a team that does a lot of things well, namely shooting the three ball – 'Bama ranks fourth nationally with 10.5 triples per game. This team also has the nation's second-best defense according to KenPom.com's efficiency ratings.

No. 8 seed. The Ramblers (26-4) can beat any team remaining if they win the tempo battle and keep the game at their preferred pace. That's what allows Loyola-Chicago's nation-leading defense – limiting opponents to 55.7 points a game – to be so effective. The halfcourt offense is centered on veteran big man Cameron Krutwig (14.9 ppg, 6.7 ppg, 3.0 ap, 58% FG) but coach Porter Moser's team also has great guards who space the floor to perfection while making smart plays and taking high percentage shots. Lucas Williamson (21 points vs. Georgia Tech in the first round) is the most explosive of that bunch.

No. 3 seed. The Razorbacks (24-6) haven't had an easy path. They first dispatched a really underrated mid-major in Colgate before escaping a dark-horse Final Four team in Texas Tech in the second round. Coach Eric Musselman has an offensively gifted team that can definitely reach the Final Four. Guards Moses Moody (17.1 ppg), JD Notae (13.1 ppg) and Jalen Tate (10.5 pp, 3.8 apg) make for a lethal backcourt, while forward Justin Smith (13.9 ppg, 7.1 rpg) does the little things to help this team win.

No. 6 seed. The Trojans (24-7) were dominant in their second-round win over Kansas and the game served as a statement for how good this team can be when it plays up to its full potential. USC drew a No. 6 seed but likely was worthy of a seed a couple spots higher. The Trojans ranked in the top 10 of KenPom.com's ratings with a top-six defense and that's largely a product of freshman 7-footer Evan Mobley's presence. He averages 16.8 points, 8.7 rebounds and 3.0 blocks per game.

No. 4 seed. The Seminoles (18-6) first avoided an upset scare against dangerous mid-major UNC Greensboro in the first round. Then in a second-round drubbing of Colorado, coach Leonard Hamilton's squad found its stride. This is a deep team that prides itself on defense, using length and athleticism to discomfort opponents. RaiQuan Gray is a 6-8 forward who makes FSU better on both ends, while freshman guard Scottie Barnes is starting to come into his own.

No. 2 seed. The Cougars (26-3) narrowly survived a second-round matchup vs. No. 10 seed Rutgers in a game they trailed throughout. But coach Kelvin Sampson has a group that – at its best – is superb on offense and defense. The only remaining teams with better KenPom.com efficiency ratings on both ends are Gonzaga and Baylor. Houston leads the nation in field goal percentage defense, allowing 37% shooting. On offense, Kansas transfer Quentin Grimes (18.1 ppg) is the main catalyst, and he's complemented in the backcourt by guards Marcus Sasser and DeJon Jarreau.

No. 1 seed. The Wolverines (22-4) are not the same team that dominated Big Ten play to claim the league's regular season title. The loss of veteran Isaiah Livers has forced coach Juwan Howard to re-establish his team's identity in the NCAA Tournament. As talented as 7-1 freshman Hunter Dickinson and 6-9 sophomore Franz Wagner are on offense, it's their defense that can make Michigan a force. Guard Eli Brooks has stepped up, too, finishing with 21 points and seven assists in the win over LSU.

No. 11 seed. The Bruins (20-9) were counted out against Michigan State by many pundits in a play-in game. Then they beat the Spartans and handily dispatched No. 6 seed Brigham Young before pummeling an Abilene Christian team that upset Texas. Coach Mick Cronin has gotten the most out of a group that lost its second-leading scorer, Chris Smith, after just eight games. UCLA feeds off of great guard play, led by Johnny Juzang (15 ppg).

No. 7 seed. The Ducks (21-6) benefited from a first-round bye when Virginia Commonwealth was sent home due to COVID-19 issues. They looked rested in dismantling No. 2 seed Iowa. Chris Duarte (23 points, seven assists vs. the Hawkeyes) pilots this team offensively, while senior forward Eugene Omoruyi (16.7 ppg, 5.2 rpg) is a Draymond Green-like bruiser who gives this squad a backbone.

No. 11 seed. The Orange (18-9) get instant offense from sharpshooter Buddy Boeheim, who poured in 30 points in 'Cuse's first-round upset of San Diego State and 25 in the second-round upset of West Virginia. Then factor in Syracuse's signature 2-3 zone and this team is in the mix to play spoiler. It was just a few weeks ago that the Orange were a bubble team unexpected to go dancing.

No. 12 seed. The Beavers (19-12) are a great example of a team that gets hot in March and capitalizes on that winning momentum. It all started with an overtime win over UCLA in the Pac-12 tournament and coach Wayne Tinkle's team went on to win the conference tourney and earn an automatic bid. But here in Indianapolis, Oregon State hardly looks like a double-digit seed, beating No. 5 seeded Tennessee by 14 and No. 4 seeded Oklahoma State by 10. It should come as no surprise if this team's winning formula keeps working. It starts with senior guard Ethan Thomas (15.6 ppg, 3.8 apg), the team's leading scorer and assists man.

No. 5 seed. The Bluejays (21-8) evaded an upset in the first round vs. UC Santa Barbara and then found their offensive rhythm in the second round in drubbing Ohio. All five Creighton starters reached double figures in the win over Ohio, and that's a regularity for this team that ranks in the top 20 nationally in three-point field goals made (10). Marcus Zegarowski has generated the most consistent offense, averaging 18.5 points in this tournament.

SportsPulse: The glass slipper fits. Oral Roberts becomes the second ever No. 15 seed to reach the Sweet 16. Scott Gleeson details how they did it and if their magical run can continue.

No. 15 seed. The Golden Eagles (18-10) aren't just your happy-to-be-here mid-major. Despite being just the second No. 15 seed to get this far (Florida Gulf Coast/"Dunk City" being the other) this team plays with a swagger. There might not be a better 1-2 punch in the Sweet 16 than guard Max Abmas, the leading scorer in the country with 24.5 points a game, and Kevin Obanor (he's had 58 points and 22 rebounds in two NCAA Tournament games).

No. 5 seed. The Wildcats (18-6) proved doubters wrong by getting here. Villanova lost starting point guard Collin Gillespie right before the NCAA Tournament and had to redefine its team identity as a result. In games against Winthrop (first round) and North Texas (second round), the championship culture that coach Jay Wright has instilled helped carry this team to the second weekend. It also helps to have a dynamic talent like Jeremiah Robinson-Earl (16 ppg, 8.3 rpg), the co-Big East player of the year, to give 'Nova a shot at outplaying its seeding even more.