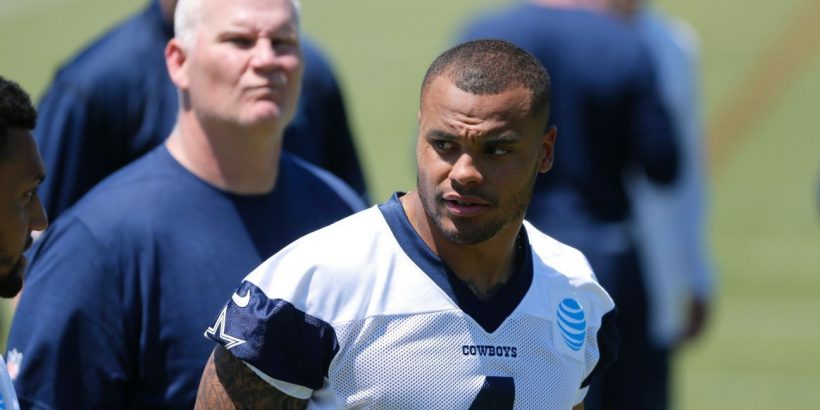 FRISCO, Texas – When the Dallas Cowboys start training camp next month, the plan is for Dak Prescott to be fully participating each day, according to coach Mike McCarthy.

“He hasn’t missed anything that’s been slated. He’s doing a lot of extra frankly so the anticipation would be for him to go every day is the outlook,” McCarthy said. “We’re not naïve. It’s just like any player that comes back from injury, especially a major joint injury, The first year back there’s going to be some things you have to work through, but I would anticipate we’d start with him in full mode, get him into the team periods and get back to playing football.”

Prescott is coming back from a dislocated and compound fracture of his right ankle suffered last October against the New York Giants.

So confident were the Cowboys in his return that they signed him to a four-year, $160 million contract that included a record $66 million signing bonus.

During the organized team activities and minicamp practices that had been open to the media, Prescott has only been kept out of 11 on 11 work. During the early portion of practice, he goes through a longer warming up period to get loose and said that was something he was likely to continue into the regular season.

There has been nothing spotted during practices that have showed Prescott to be favoring his leg at all.

“He’s definitely had some moments from workouts, probably 3-4 weeks back, where I definitely felt once we were able to see him move in the pocket, out of the pocket-type drills, scramble drills,” McCarthy said. “We’re doing more of that work by design for a number of reasons and that only helps him …Physically I think he’s right where he needs to be.”