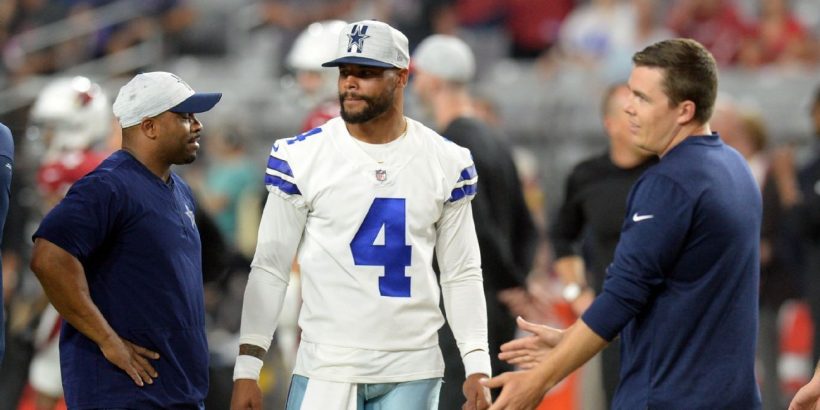 FRISCO, Texas — The likelihood of Dallas Cowboys QB Dak Prescott seeing any live action in the preseason before the Sept. 9 opener against the Tampa Bay Buccaneers is growing dimmer and dimmer.

On Monday, McCarthy said if Prescott did not play against the Houston Texans on Saturday, he would not play in the Aug. 29 preseason finale against the Jacksonville Jaguars.

McCarthy said Prescott will continue to ramp up his throwing program from the right latissimus strain that has kept him out of team drills since late July but not take any team drills. Wednesday’s practice is the last full-padded workout the Cowboys have before playing the Texans.

At the start of training camp, the Cowboys stressed the importance of Prescott getting some work in the preseason games in order that his first live action off his surgically repaired right ankle would not come against the Buccaneers.

It does not look like that will happen now.

“At the end of the day, I trust the practice process,” McCarthy said. “The tempo of how we practice, the cadence variations and the emphasis of the game situations, I feel really good about what we’re able to get done in this environment as opposed to relying on preseason games. I’ve always felt the preseason games were primarily for the development of your young players. I do know this is our first year going through training camp.

“I think ideally if everybody was healthy and everything went smooth we may have gone to a more traditional [routine], play 10, 15 plays in the first game, played a quarter in the second game, played the first half in the third game. Those things were all discussed, but camp doesn’t always go the way you’d like it to go.”