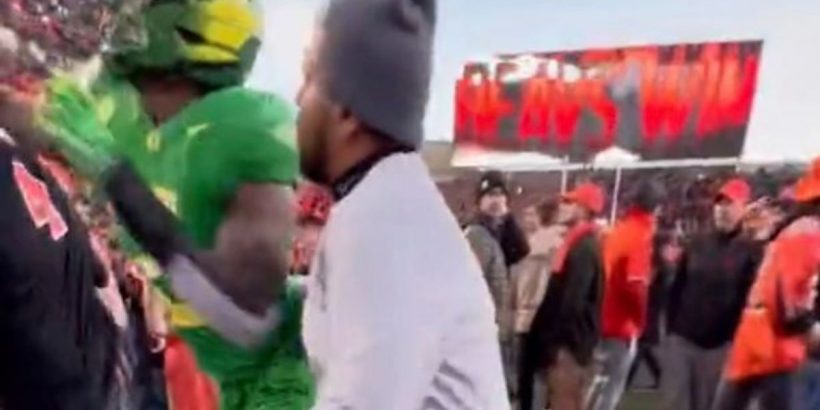 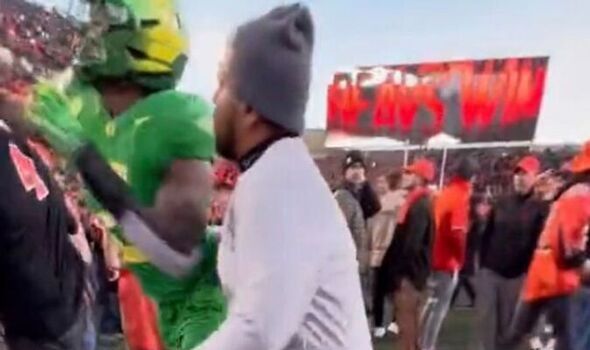 A college football player will have find himself on a lot of trouble after punching a rival fan in the back of the head as he walked off the field following a loss. Oregon linebacker DJ Johnson, who is projected to be a draft pick in the 2023 NFL Draft, may have ended his American football career after being filmed allegedly striking an Oregon State fan. Johnson was immediately dragged away from the incident by his coaches.

The incident took place after Oregon State defeated state rivals Oregon for just the third time in 14 years, who came into the game as underdogs against the number 10 ranked Oregon. The Ducks, who start star, and future NFL Draft pick Bo Nix at quarterback had a desperately disappointing time in the second-half, surrendering a 17-point lead to go through 17-34 to lose 38-34.

Oregon State Beavers were elated when the clock’s hit 00’s, with fans running on to the field to celebrate the victory against the Ducks. Just moments afterwards, Johnson was seen walking off the field as a man looked to have said something to the 24-year-old senior. Johnson then reacted, punching the man in the back of the head before being lead off the field by coaches.

The fan, who was wearing a cowboy hat along with an Oregon State jersey, was seemingly not too injured by the punch.

Johnson, who is in his final year at college before hopefully being drafted to play in the NFL, may have now played his last game in a Ducks uniform, and potentially, ever in the sport, should teams be put off by his actions.

The 24-year-old is projected to be a mid-to-late round draft selection in the upcoming class, and has six sacks and 8.5 tackles for losses in what has been an impressive season for him, who is also considered a leader on the defence.

But he will now likely be suspended for the incident, and almost certainly ruling him out for Oregon’s bowl game.

It is also not known whether the fan will press charges, however with video evidence, he would have a strong case to do so.

Oregon will await to see who they will play in their bowl game after failing to reach the PAC-12 Championship, with Washington Huskies to face USC, and the Heisman Trophy favourite, quarterback Caleb Williams. The Huskies themselves will see Michael Penix Jr play his last game in college, being projected to be a second-round draft selection in the 2023 class.