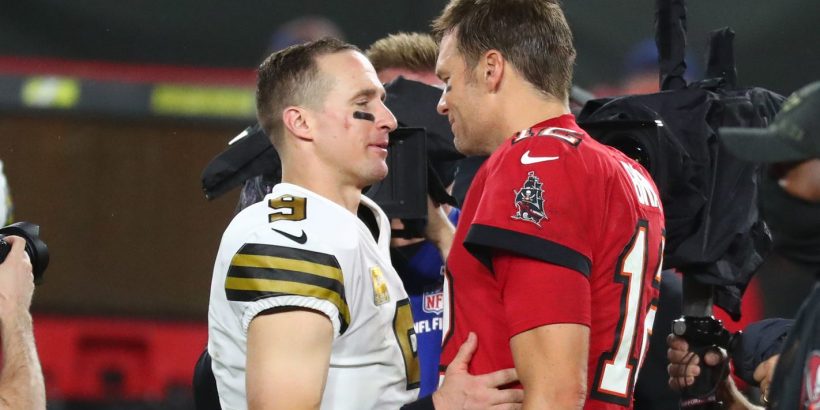 When the NFL’s divisional round of the playoffs kicks off Saturday, old rivalries will be renewed, while others begin to bud, and history will be made.

From future Hall of Famers Tom Brady and Drew Brees, to young draft classmates Lamar Jackson and Josh Allen, two of the most marketable stars in Patrick Mahomes and Baker Mayfield to longtime friends-turned-foes Sean McVay and Matt LaFleur, the coming weekend offers it all.

The stakes are high, which only makes these matchups all the more compelling, and so, this round has the potential to go down as quite a memorable weekend.

Here’s a look at the biggest rivalries on tap:

You can’t have a conversation about greatness without including the 43-year-old Brady and the 41-year-old Brees.

For the last 20 years, they have dominated this league while serving as the gold standard of quarterbacks. Brady boasts six Super Bowl rings to Brees' one. Brady and Brees have each led the league in touchdown passes four different times. Brees boasts an NFL-record seven passing titles, while Brady is a three-time MVP.

Head-to-head, Brees holds the edge, having won five of their seven meetings, including two this season now that they’re divisional foes.

With each trying to stave off Father Time long enough to secure one more Lombardi Trophy, they meet again. But this is the first time that they will meet as playoff opponents.

Brady and the Buccaneers hope the third time is indeed the charm. Brady had two performances he very much would like to forget: a two-touchdown, two interception season opener, and then a zero-TD, three-interception outing in Week 9.

It’s hard to beat a team three times. But don’t tell that to the Saints. They enter the week as four-point favorites and will try to complete the sweep and take one more step toward that Lombardi Trophy.

The sun certainly has begun to set on the careers of Brady and Brees, but the NFL appears to be in good hands because of the strong crop of quarterbacks taken in the last several years.

On Saturday, two members of the 2018 draft class will face off. Buffalo selected Allen with the seventh pick of that draft, and Baltimore took Jackson 32nd overall.

Jackson and Allen each reflect the evolution of the quarterback position. The prototypical, statuesque quarterback appears headed for extinction, and in his place is a more athletic, well-rounded quarterback, capable of doing just as much damage with his legs as with his arm.

Jackson, the reigning NFL MVP, is coming off of his second 1,000-yard rushing season. He ran for seven touchdowns while throwing another 26. Meanwhile, Allen tallied eight rushing touchdowns while posting career passing numbers (4,544 yards, 37 touchdowns) and placing himself in this year's MVP conversation.

Both quarterbacks are coming off the first playoff victories of their careers after disappointing losses in 2019.

Insurance companies will have a field day with this matchup. Who will cram more commercials of their spokesman into the broadcast: State Farm and Mahomes, or Progressive and Mayfield?

On the field, the defending Super Bowl champs and Mahomes (the 2018 NFL MVP and reigning Super Bowl MVP) return to action after receiving a bye, and they’ll face a red-hot Browns team led by a much-improved Mayfield and aggressive defense.

Mahomes and Mayfield will renew their college rivalry on Sunday, meeting for only the second time since their epic 2016 shootout.

In that game between Oklahoma and Texas Tech, Mayfield threw for 545 yards and an Oklahoma record seven touchdowns, and Mahomes racked up 734 passing yards and five touchdown passes. Mayfield and the Sooners won 66-59. Could similar fireworks be in store for the Chiefs, who boast one of the most prolific offenses in the league, and the Browns, who just hung 48 points on the Steelers?

The year was 2010, and two-time Super Bowl-winning head coach Mike Shanahan was forming his coaching staff in Washington. His quarterbacks coach was LaFleur. McVay started out as an offensive assistant before getting promoted to tight ends coach.

Now, they’ll face for the first time as opposing coaches.

LaFleur, in his second season as head coach, and his Packers received a bye in the opening round of the playoffs because they earned the NFC’s top seed. They return to action as 6-½-point favorites. But the Rams aren’t to be taken lightly.

This is a showdown of the No. 1 scoring offense against the No. 1 scoring defense in the league, and McVay and LaFleur know each other’s tendencies so well, that it’s going to be interesting to see which play-caller can win the war of wits.

The difference-maker could be Aaron Rodgers, the leading MVP candidate. The three-time All-Pro, two-time MVP and Super Bowl XLV champion holds a great experience edge over Rams quarterback Jared Goff, who has battled inconsistencies this season and will be three weeks removed from surgery to repair a broken thumb on his passing hand.