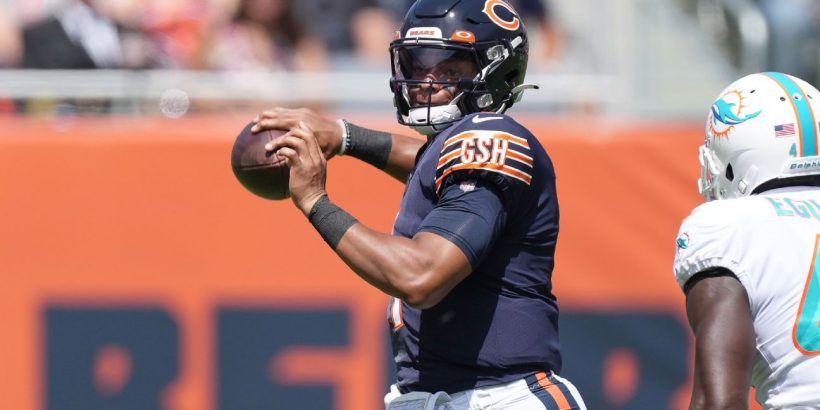 While the Dallas Cowboys and Pittsburgh Steelers opened the 2021 NFL preseason with their Hall of Fame game matchup last week, preseason really kicks off this week, as all 32 teams will be in action for Week 1.

It started Thursday night with two games, as first-round quarterback Mac Jones helped lead the New England Patriots past the Washington Football Team in his NFL debut while former first-rounder Dwayne Haskins was impressive as the Pittsburgh Steelers defeated the Philadelphia Eagles.

Three more games took place Friday, including Jared Goff’s debut as the Detroit Lions starting quarterback after coming to the Motor City from the Los Angeles Rams in a trade that also included two first-round picks.

Saturday is the big day this week, with 10 games. In the afternoon, the Denver Broncos will travel to play the Minnesota Vikings in a homecoming for quarterback Teddy Bridgewater. Bridgewater, the Vikings’ first-round pick in 2014, played for the Vikings from 2014 to ’17 and is competing with Drew Lock to be the Broncos’ starting quarterback. The NFL’s two newest stadiums will also host their first games with fans, as the Las Vegas Raiders take on the Seattle Seahawks at Allegiant Stadium while the Los Angeles Chargers play the Rams at SoFi Stadium.

The slate concludes Sunday in Indianapolis, as the Colts host the Carolina Panthers. We’ll get our first glimpses at how the Colts plan to replace injured quarterback Carson Wentz and what Sam Darnold looks like in a Panthers uniform.

The Bills’ are going to get creative with their defensive line personnel this season. Veteran defensive ends Jerry Hughes and Mario Addison did not play and their absence cleared the way for rookies Greg Rousseau and Carlos Basham to get plenty of run. Buffalo’s most exciting lineup included the Rousseau and 2020 second-round pick AJ Epenesa on the edge with Basham and Efe Obada playing defensive tackle — a lineup that immediately wreaked havoc in Detroit’s backfield. Defensive line was the biggest focal point for the Bills this offseason and the early returns are exciting. — Marcel Louis-Jacques

Despite a tough opening drive for new quarterback Jared Goff, he was able to finish the first quarter strong. In limited action, Goff completed 7 of 9 passes for 56 yards with Tyrell Williams and rookie receiver Amon-Ra St. Brown emerging as his primary targets, both catching two passes in the opening quarter. Goff helped engineer an 18-play drive to five different receivers, which is something he’s never done in his regular-season or playoff career with the Los Angeles Rams, per ESPN Stats & Information. He completed 7 of 8 passes on that particular drive to five different receivers, capped by a Lions field goal. — Eric Woodyard

If the Cowboys are having a center competition and not telling anybody, Connor Williams did not help himself against the Cardinals. He started at center over Tyler Biadasz and had two poor shotgun snaps and might have contributed to a delay of game penalty in the first two drives. Williams had some issues with his snaps earlier in camp but smoothed that issue over with more experience. Executive vice president Stephen Jones acknowledged the Cowboys could go with their “best five” up front with the assumption being it’s Williams or Biadasz at center. Maybe it is between Williams and Connor McGovern at left guard now. — Todd Archer

Despite it being a preseason game against a bland defense, Cardinals second-round pick Rondale Moore lived up to the billing. He showed off his speed, quickness and ability to catch and run throughout his 21 snaps. Moore was used in a variety of ways, whether it was on jet sweeps, short passes or deep balls. Whatever the situation, he produced. If it’s a preview of what’s to come this season, he could end up being one of the Cardinals’ most dynamic offensive players. — Josh Weinfuss

Having finished with only 19 sacks last season, it was important for the Titans to show improvement. Rookie outside linebacker Rashad Weaver was one of the players the team added to help in that area. Coach Mike Vrabel said Weaver was one of the players he was most looking forward to seeing and Weaver finished with a tackle for a loss and a half-sack in limited duty during the Titans’ first preseason game. The Titans pass rush was consistently in the Falcons backfield and finished with four sacks. The pass rush will be tested by a much better unit next week during joint practices with the Buccaneers followed by the second preseason game on Saturday. — Turron Davenport

One of the biggest questions for the Falcons since before training camp was at left guard. For the majority of camp, Josh Andrews, who signed with the team in the offseason from the Jets, seemed to have the upper hand. Now the Falcons have to figure something out at the position. Andrews had a rough game and as one of the few potential starters to receive playing time, Atlanta has to continue that competition. Perhaps Drew Dalman — who worked at guard but started against Tennessee at center — will re-enter the competition or the team might look to Jalen Mayfield, who has spent camp at right tackle. Whoever plays left guard will look invariably better playing next to left tackle Jake Matthews and center Matt Hennessy (neither played Friday). — Michael Rothstein

Dwayne Haskins won this round of the preseason backup quarterback competition with Mason Rudolph in the Steelers’ win against the Eagles. Haskins completed 16 of 22 passes for 161 yards and a touchdown. He orchestrated two more touchdown drives and a field goal drive. Haskins had moments when he looked like the first-round quarterback drafted by the Washington Football Team, such as when he threaded the needle to Cody White for an 18-yard gain just before the two-minute warning, but there were other instances when he threw wobbly passes, sailed throws or appeared slow in his decision-making. Rudolph completed 8 of 9 attempts for 77 yards, but had promising drives stalled thanks to two holding penalties against Pat Freiermuth and Trai Turner and a 10-yard sack. The backup quarterback battle is still a long way from over, but on Thursday, Haskins did what Rudolph has not by getting the ball into the end zone. — Brooke Pryor

Jalen Hurts played two series and ended 3-of-7 for 54 yards (7.7 yards per attempt) with a 69.9 quarterback rating. The biggest thing coach Nick Sirianni wanted to see was an improvement in Hurts’ rhythm throws, and Hurts showed progress in that area, largely getting the ball out on time and with accuracy, particularly on the first series. He was the victim of a couple drops and missed on a deep throw to Quez Watkins that could have been a touchdown, but it was a decent preseason debut for Hurts, who will look to build on the performance when the Eagles host the Patriots next Thursday. Meanwhile, Watkins continues his push for a larger role in the offense. He showed off his jets on a 79-yard catch-and-run late in the first quarter on a pass from Joe Flacco. Watkins has been the Eagles’ offensive star this summer and might just end up in the starting lineup if he keeps it up. — Tim McManus

Standout performer: Patriots K Quinn Nordin: 3-for-3 FG with a long of 50

Cam Newton started and played the first two series (leading one field goal drive) before Mac Jones replaced him and played the next five series (two FG drives). Newton finished 4-of-7 for 49 yards and wasn’t helped on the opening drive when LT Isaiah Wynn whiffed on DE Chase Young on third down and put Newton in harm’s way. Meanwhile, Jones’ best throw might have been an incompletion, a beautiful deep ball to WR Kristian Wilkerson in the end zone that went off Wilkerson’s hands. Jones finished 13-of-19 for 87 yards, while mostly showing command at the line of scrimmage. Bill Belichick has said Newton is the starter, while leaving open the door for Jones to compete for the job when he shows he’s ready. The gap between them might be closing faster than Belichick anticipated. — Mike Reiss

Defensive end Chase Young finished 2020 strong — and started this year the same way. He forced an incompletion when he turned the corner and pressured Cam Newton in what at first looked like a sack. Young also drew a holding penalty on a run and was in great position to defend a screen because he diagnosed it quickly. Young also made a nice stop using his speed on a second-and-20 run; on the play, he was blocked inside by the tight end, but Young quickly got around him as the play went to the outside. The back cut up, and Young dropped him for a 3-yard gain. He showed a lot of his skill: the ability to win off the edge, awareness on the screen and hustle to keep it to a short gain. He makes flash plays, but also a lot of little ones that make a big difference. — John Keim

The Chicago Bears offense was burn the tape bad in Saturday’s first half — Miami outgained Chicago 215-79 — before rookie quarterback Justin Fields injected life into Soldier Field. Fields (14-of-20 for 142 yards, one touchdown, 33 rushing yards, one rushing touchdown) looked like, well, a rookie, for most of the second quarter when he replaced Andy Dalton, but the first-round pick eventually settled into a groove and caught fire after halftime. As the game wore on, Fields showed terrific command of the pocket, and when he scrambled, he often froze Miami defenders, who were unsure of whether he would throw or take off. Fields’ blazing speed is going to be a huge asset whenever he becomes the starting quarterback. His eight yard touchdown run in the third quarter also showcased his strength — Fields deftly avoided a Miami defender who swiped at him before he took off for the score. Is it just the preseason? Yes. But did Fields show more than enough promise for an NFL debut? Absolutely. — Jeff Dickerson

Tua Tagovailoa only made one mistake, but it was costly. The Miami Dolphins starting quarterback had a productive preseason outing until he attempted to thread the needle on a ball in the end zone to Adam Shaheen that Chicago Bears safety DeAndre Houston-Carson stepped in front of and intercepted. That one miscue — which happened to be Tagovailoa’s last play of the afternoon — was the one negative in an otherwise encouraging showing. The former first-round pick finished 8-of-11 for 99 yards as Miami’s offense thoroughly outclassed the Bears (Miami outgained Chicago 215-79 in the first half) until rookie quarterback Justin Fields got hot after halftime. Tagovailoa’s best moment came on a perfectly thrown downfield ball to Mike Gesicki that gained 50 yards. The Dolphins may still have quarterback concerns, but Tagovailoa mostly took a step in the right direction on Saturday. — Jeff Dickerson