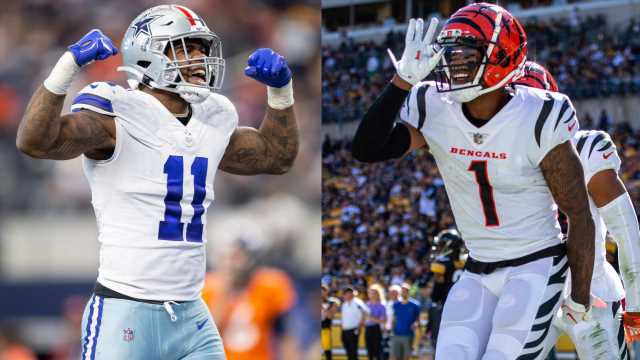 With the 2021 NFL regular season in the books, former NFL scout Daniel Jeremiah has reviewed his notes from the entire campaign to rank the top 25 rookies.

Chase has already emerged as a top five wide receiver in the NFL. With 1,455 receiving yards, the No. 5 overall pick broke the rookie record set last year by his former LSU teammate, Justin Jefferson. He also scored a whopping 13 touchdowns. Chase is a big reason why the Bengals went from worst to first in the AFC North this season.

Parsons is a unicorn. His ability to play multiple roles at an elite level has transformed the Cowboys’ defense. Racking up 13 sacks and 30 quarterback hits as a part-time pass rusher is simply ridiculous.

Slater was a steadying — and dominating — presence on the Chargers’ revamped offensive line, securing the blind side for Justin Herbert’s record-setting sophomore campaign. Consequently, he’s a Pro Bowler in Year 1.

Pitts was as good as advertised. The best tight end prospect I’ve ever evaluated coming out of college has already established himself as a major mismatch player for the Falcons, becoming just the second tight end in NFL history to hit 1,000 yards in Year 1. (The other one? Hall of Famer Mike Ditka﻿.)

Drafted late in the second round, Humphrey was consistent from start to finish this season. The 17-game starter excelled in the run game and was dependable in pass protection.

Waddle set a rookie record with 104 receptions and he’s only scratching the surface of his talent. Hopefully the Dolphins look to exploit his field-stretching ability more often next season.

Touted as “NFL ready” throughout last year’s pre-draft process, Surtain was exactly that. The second-generation pro has everything you’d ever want in a premier cornerback: size, speed, physicality and ball skills.

Phillips was the most gifted true edge rusher in this draft class and it showed in his rookie production (8.5 sacks, 16 QB hits). He is a natural bender at the top of his rush and displayed his ability to finish.

Jones cooled off a little bit down the stretch, with five interceptions in his final four games, but he was clearly the most efficient and productive rookie quarterback, leading the group in yards (3,801), touchdown passes (22), completion percentage (67.6) and passer rating (92.5). I was very impressed with his combination of poise and accuracy.

Harris was the featured player in Pittsburgh’s offense, piling up 1,200 rushing yards, 74 catches and 10 total touchdowns. The 6-foot-1, 232-pounder proved he could handle a heavy NFL workload and looks to be a Steelers foundation piece going forward.

Sewell settled in after a tough start to the season and established himself as a solid starting tackle for the Lions. Pretty impressive, considering he didn’t turn 21 until midway through the season.

I loved the way Oweh set the edge in the run game and he was extremely disruptive against the pass. The Ravens clearly know how to scout — and develop — edge rushers.

The second-rounder proved to be one of the best value picks in the draft. Holland boasts tremendous speed and instincts, and his versatility played a major part in Miami’s defensive dominance during the seven-game win streak.

I love Bolton’s game: He can run, cover and blitz. His instincts against the run and pass are exceptional. As the team leader in tackles (112) and tackles for loss (11), Bolton is a crucial component of Kansas City’s eighth-ranked scoring defense.

The 2020 Heisman Trophy winner was an immediate difference-maker on the Eagles’ offense, leading the team in catches (64), yards (916) and receiving touchdowns (five). Smith’s a smooth route runner with over-the-top speed.

Barmore was a flash player at Alabama, but he put forth a consistently dominant rookie campaign in New England. He played with passionate effort and was very disruptive.

Williams’ angry, aggressive running style jumped off the tape this season, and according to Pro Football Focus, he led the NFL in missed tackles forced per rush. He is also an asset in the passing game, as both a blocker and receiver.

The sixth-round pick has been the perfect match for Kyle Shanahan’s run scheme as an explosive one-cut runner with excellent vision. Mitchell led San Francisco with 963 rushing yards despite playing in just 11 games.

Newsome is an easy mover with excellent ball skills and toughness. He missed some games due to health issues, but his presence was absolutely felt when he was on the field.

The No. 226 overall pick would’ve gone much higher if not for documented health concerns. Fortunately, Smith has stayed healthy and proved to be a steal for Brett Veach and the Chiefs as a 17-game starter in Year 1.

St. Brown kept getting better and better as the season went along. Over the final six weeks, he averaged 8.5 catches for 93.3 yards per game, scoring six touchdowns in the process. I love his play strength and competitiveness.

The Jets made a concerted effort to bolster their offensive line in the last two drafts, and Vera-Tucker looks like a fabulous building block. He is outstanding working to the second level and can easily anchor in pass protection.

Carter missed some time due to injury, but he also provided several big plays for the Jets’ offense. He runs hard between the tackles and he’s a nice weapon in the passing game.

Ojulari was very productive as a pass rusher (eight sacks, 13 QB hits), and I love his non-stop motor. He will quickly emerge as one of the better young QB hunters in the league.

Mills earned the right to enter next fall as the starting quarterback for the Texans. The third-round pick played really well down the stretch, posting a 68.4 completion percentage, 9:2 TD-to-INT ratio and 102.4 passer rating over the final five games of the season.