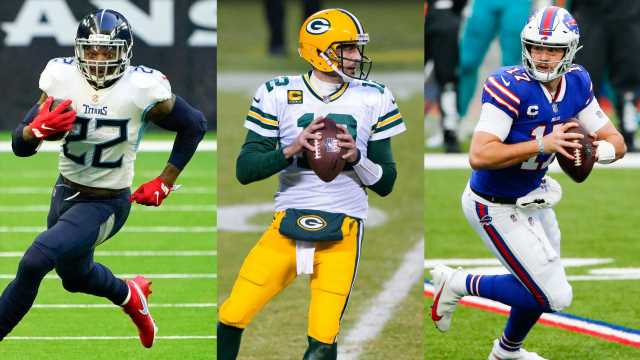 Needing 223 rushing yards in Week 17 to reach 2,000 for the season, Derrick Henry bulldozed the Texans to the tune of a career-high 250 rushing yards. Henry is the eighth player in NFL history to amass at least 2,000 rushing yards in a single season, and his 17 rushing touchdowns trail only Hall of Famer Terrell Davis (21 in 1998) for most in a 2,000-yard season. Davis won the NFL MVP Award and the Broncos went on to win Super Bowl XXXIII that season.

2. Aaron Rodgers is in MVP company with 48 passing touchdowns …

Aaron Rodgers tossed four TD passes as the Packers knocked off the Bears and locked up a first-round bye. Rodgers broke his own franchise record with 48 pass touchdowns this season. Each of the previous five times a QB threw at least 48 TD passes in a season, he went on to win the NFL MVP Award — Dan Marino had 48 passing touchdowns in 1984, Peyton Manning had 49 in 2004 and 55 in 2013, Tom Brady had 50 in 2007 and Patrick Mahomes had 50 in 2018.

3. … But Josh Allen also makes a case for MVP

Josh Allen had three passing touchdowns as the Bills trounced the Dolphins in Week 17, finishing the season with 37 touchdowns through the air and another eight on the ground. Three previous QBs finished a season with at least 35 TD passes and at least seven rushing touchdowns. All three — Steve Young in 1994, Cam Newton in 2015 and Lamar Jackson in 2019 — won MVP that season.

With four passing touchdowns Sunday against the Falcons, 43-year-old Tom Brady reached 40 for the season. Not only is Brady the oldest player with at least 40 passing touchdowns in a season, but he also joined Peyton Manning as the only players in NFL history to throw 40-plus TD passes in a season with multiple teams.

6. Lamar Jackson has 1,000-plus rushing yards in back-to-back seasons

Lamar Jackson finished the season with 1,005 rushing yards after he accounted for 97 of Baltimore’s franchise-record 404 yards on the ground against the Bengals. Jackson had 1,206 rushing yards in 2019 and now boasts two of the three 1,000-yard seasons by a QB in NFL history. Michael Vick had 1,039 rushing yards in 2006 with the Falcons.

7. J.K. Dobbins joins pair of Hall of Famers with record streak for rookie

Another Ravens player with a historic performance on the ground in Week 17: Rookie running back J.K. Dobbins. Dobbins had a career-high 160 rushing yards and added a pair of scores for the Ravens. It marked Dobbins’ sixth consecutive game with 50-plus rushing yards and at least one rushing touchdown, joining Hall of Famers Franco Harris (1972) and Eric Dickerson (1983) for the longest such streak by any rookie since the 1970 merger.

Jonathan Taylor set a single-game Colts record with 253 rushing yards as he carried them to a win over the Jaguars and a spot in the postseason. Taylor’s 253 yards on the ground were the second-most ever in a season finale, trailing Jamaal Charles (259) in for the Chiefs against the Broncos in 2009. The only rookie in NFL history with more rushing yards in a game than Taylor is Adrian Peterson – his 296 rushing yards against the Chargers in 2007 are the most by any player in a single game.

One huge bright spot for the Vikings despite missing the playoffs in 2020: Justin Jefferson. The rookie wide receiver had 133 receiving yards Sunday in Detroit, bringing his season total to 1,400. That bested Anquan Boldin’s previous record (1,377 receiving yards in 2003) for the most by a rookie in the Super Bowl era.