Sunday night’s live NFL triple-header on Sky Sports sees the Steelers face the Ravens in an AFC North rivalry clash, the unbeaten Rams take on fellow NFC contenders the Saints and a meeting of the GOATs.

We are live on Sky Sports Action from 5pm for an hour’s build-up. Here’s a look ahead to what you can expect as we preview Sunday’s games… 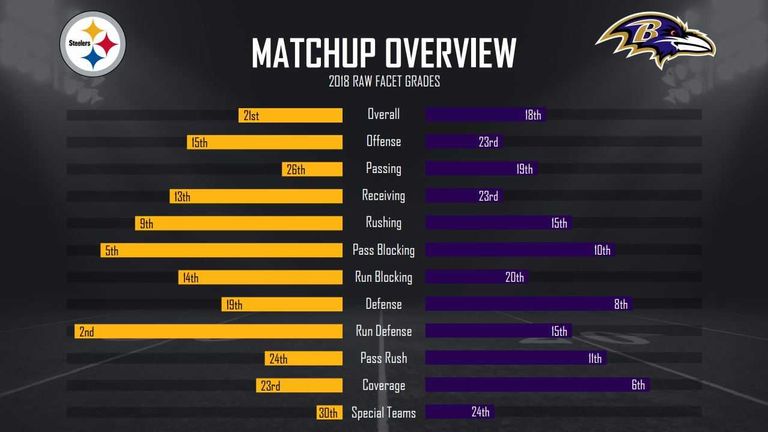 After stumbling out of the blocks with a tie in Cleveland and a loss to the Chiefs, the Steelers (4-2-1) are very much back on track. They have won three straight and four of the last five, with the only defeat coming at the hands of Sunday’s opponents. They have averaged 34 points over the last three weeks and look back to their best, hoping to top the AFC North for a third straight season.

Meanwhile, Baltimore (4-4) remain one of the league’s more mystifying franchises. They have managed to obliterate lesser opponents – 47-3 over the Bills and 21-0 over Tennessee – as well as defeat the Steelers in Pittsburgh, and were a missed extra point from taking the Saints to overtime. However, losses to the Bengals and Browns mean they have a losing record in the division. Which Ravens team will we see on Sunday?

Steelers running back James Conner, who had 212 scrimmage yards and two rushing touchdowns in Week Eight, is the fourth first-or-second year player to record four games with at least two rushing scores in his team’s first seven games of a season. 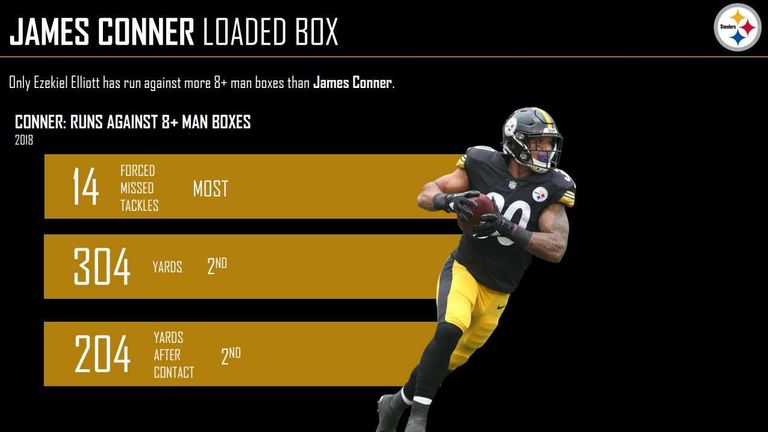 Can the Ravens slow down Conner? Even without Le’Veon Bell, Pittsburgh’s ground game has thrived with the sophomore star. If the Ravens do load up against the run, they leave Ben Roethlisberger’s favourite targets – Antonio Brown and JuJu Smith-Schuster – alone on the outside. The pair both have 46 catches this season and over 550 yards, but Brown has averaged over a touchdown a game with eight on the year.

Ravens wide receiver John Brown (31-586-4) has added a dynamic element to Baltimore’s passing game in 2018, but realistically, the stars to watch are on defense. Za’Darius Smith and the ageless Terrell Suggs have 5.5 sacks each. And, and as a unit, the team leads the league in yards per game allowed (293.8) and points per game allowed (17.1). They are a fun-to-watch, fundamentally-sound football team. 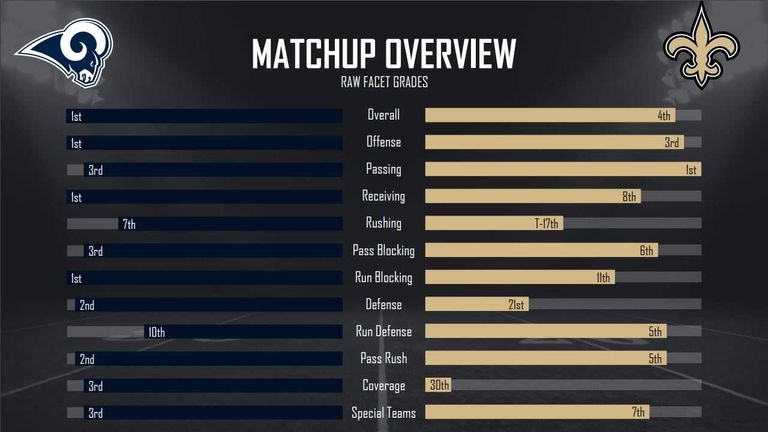 What is there to say about the Rams (8-0), except that they look unstoppable? Everything seems to be coming together on offense, defense and, crucially, special teams. Outside of easy wins over the Raiders, Cardinals and 49ers, they have cast aside the Chargers, Vikings, Seahawks (in Seattle) and, most recently, the Packers. They rank in the top six in offensive and defensive points and look like NFC Super Bowl favourites right now.

New Orleans (6-1) are right behind LA with only one defeat on the season, a 48-40 shock loss to Tampa Bay in Week One. Quarterback Drew Brees is playing at an insanely high level. He already owns three of the four highest single-season completion percentages in NFL history, and this year he leads the league with a 77.4 completion percentage, 5.4 per cent higher than the current single-season record of 72.0 per cent set by Brees in 2017.

Rams defensive tackle Aaron Donald has six sacks in his past two games and leads the NFL with 10 sacks and 12 tackles for loss this season. 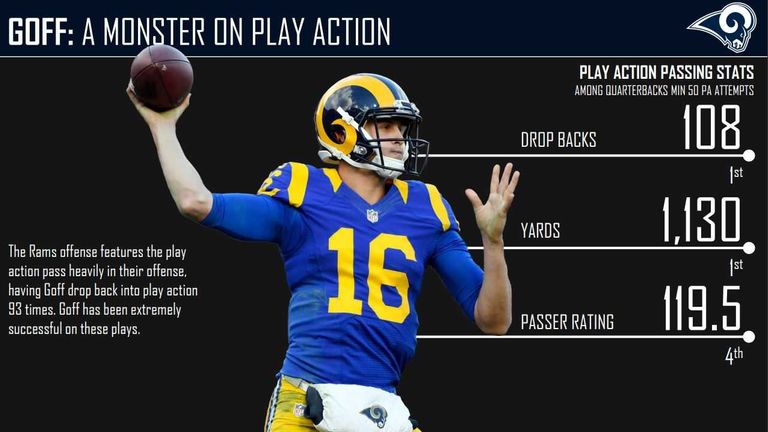 How long do we have? Offensively for the Rams, Jared Goff is on fire (17 touchdowns, five interceptions), Todd Gurley already has 15 touchdowns in just eight games (he won Offensive Player of the Year with 19 last season), and Robert Woods and Brandin Cooks each have at least 12 catches of over 20 yards.

On the defensive side of the ball, Donald is arguably the best player in the NFL. John Johnson has three interceptions, Marcus Peters is a ball hawk and Cory Littleton has made plays all over the field. 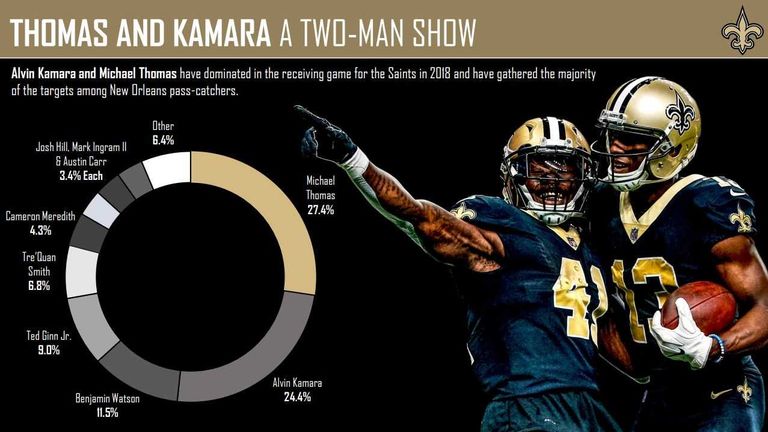 But, they will have to contend with Brees and the league’s second-best scoring offense in the Saints this Sunday, consisting of running backs Alvin Kamara and Mark Ingram and receiver Michael Thomas, who tend to shoulder the load for New Orleans. Also, keep an eye out for back-up quarterback Taysom Hill, who lines up on special teams, as a return man, at quarterback, running back, tight end, you name it. ‘Mr. Everything’ could catch the Rams out at any time. Whether it is a questionable roughing-the-passer penalty (Week Two) or last week’s Ty Montgomery fumble debacle, things never quite seem to fall into place for Aaron Rodgers and the Packers (3-3-1), who will be angry and frustrated they do not have a better record than the one which places them third in the NFC North. They proved they could hang with the big boys by almost defeating the Rams, but all too often they have fallen behind early and played catch-up this season.

The Patriots (6-2), meanwhile, are back in business, rattling off five-straight wins after a 1-2 start. They are undefeated at home (4-0) and again are in complete control of the AFC East. Tom Brady’s efficiency numbers are not at their best – 16 touchdowns, seven interceptions – but the team has managed to put up at least 38 points in four games of their five-match win streak.

Rodgers (103.6) and Brady (97.6) rank first and third in career-passer rating and are the only active NFL players with multiple-league MVP awards – three for Brady and two for Rodgers. All eyes are on Rodgers and Brady, who sadly have only ever faced off as starters once before – a Packers win in 2014. We will be watching two of the greatest players of all time.

Outside of the two superstars under centre, Green Bay running back Aaron Jones is electric and averaging 6.2 yards per carry. Davante Adams is always reliable on the outside, Jimmy Graham offers a big target, and rookie Marquez Valdes-Scantling is proving to be a decent deep threat. One other Packer to watch is rookie corner Jaire Alexander, who had an outstanding outing last week. Patriots coach Bill Belichick has praised him, saying: “This guy is a really good football player, and I think he’s got a great future in the league. I think he’ll be one of the top corners in the game for quite a while here.” 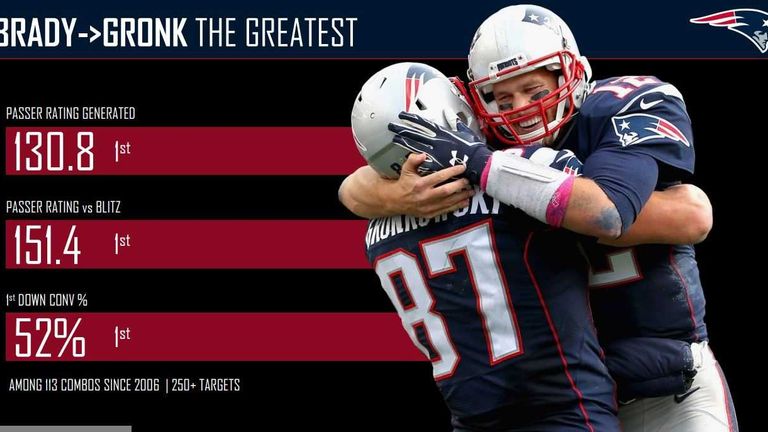 James White is having a star season for New England, with 204 rushing yards, 459 receiving and seven total touchdowns. Josh Gordon is developing with each game on the outside, and Julian Edelman‘s return from suspension has given Brady another safety blanket in the middle of the field. However, Rob Gronkowski has not been at his best this season. After a 123-yard, one-touchdown outing in Week One, he has not found the endzone or topped 100 since. Whatever the issue has been, he is still certainly one to watch.

@PFF will provide a host of in-depth analysis throughout the season across Sky Sports platforms including our live coverage on Sunday and throughout our weekly build-up and reaction on www.skysports.com/NFL