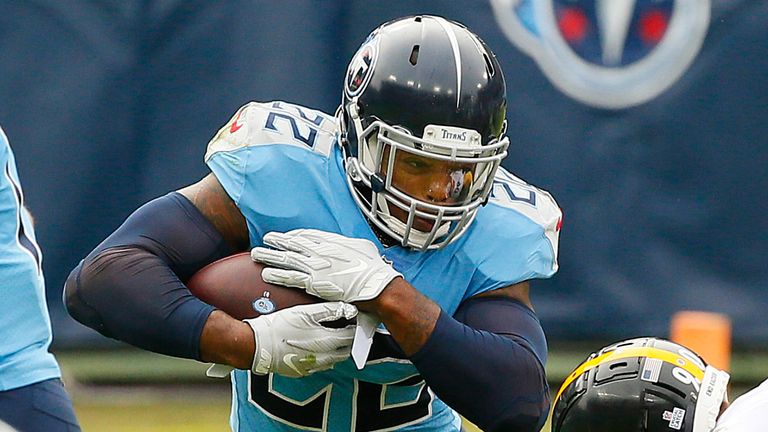 The Cleveland Browns, owners of the No 1 rushing attack in the NFL, travel to the Tennessee Titans on Sunday to take on the league’s leading rusher for the past two seasons, Derrick Henry – live on Sky Sports NFL from 6pm.

“This used to be a passing league, but these are two squads that remind us of yesteryear; this is truly a slugfest,” Burleson added on Good Morning Football this week. 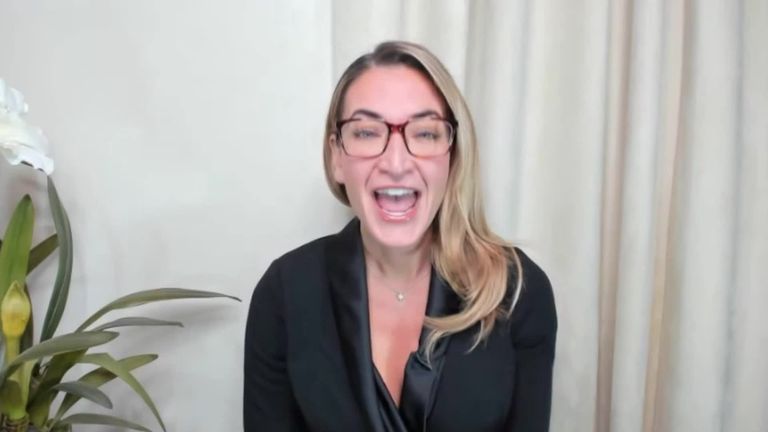 Reflecting their heavyweight status, Chubb and Henry are two of just three players averaging over 100 rush yards per game this season, tallying 102.7 and 114.3, respectively. Minnesota Vikings RB Dalvin Cook (113.0), the other.

Henry led the NFL in 2019 with 1,540 yards and he is the frontrunner again this season, with 1,257 already to his name through 11 games. And this for a guy who is said to only heat up come this time of year.

“He [Henry] is the best December football player we have in the league – by a wide margin,” added GMF‘s Peter Schrager. “He picks it up at this time of year. 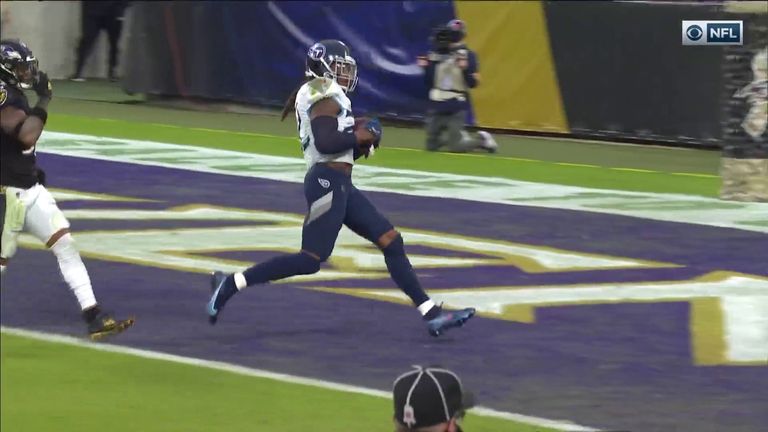 “They’ve got the Browns [on Sunday]; Emmitt Smith used to face Barry Sanders every couple of years and it would be hyped up as the greatest matchup ever.

“I honestly think, with all due respect to Dalvin Cook, Saquon Barkley and Christian McCaffrey – who aren’t on the field – that Chubb and Henry might be the best running backs in all of football right now.

“I cannot wait to see the two power backs go at it.”

While Henry, who already has seven 100-yard games this season, is said to own December, it’s actually Chubb who seems to be heating up – the Browns back might even be challenging ‘The King’ for his rushing crown if it weren’t for six weeks lost to injury earlier in the season.

“Give me Chubb,” said Kyle Brandt, weighing in on the debate. “Since returning from injury, he has 126 yards and a touchdown, 114 yards and 144 and a score [in his last three games]. “I don’t think there is anyone playing better than him right now at the running back position. Henry is amazing, Alvin Kamara, but this dude is Mr Consistent.

“He gets lost because he’s part of a tandem, and because he’s with the Browns and doesn’t talk, because he doesn’t have a cool nickname like ‘The King’.

“I think Chubb is going to go big in this game. One of my favourite players.”

The tandem Chubb is part of is with former Kansas City Chiefs back, Kareem Hunt, who himself was the NFL’s leading rusher back in 2017 on his way of Offensive Rookie of the Year honours. 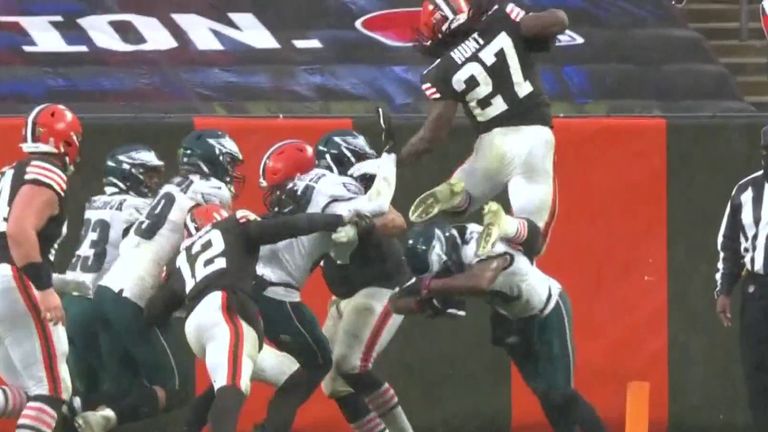 Hunt did an admirable job stepping in for the injured Chubb and continues to complement his partner since his return; Hunt has 706 yards through 11 games, well on course of a 1,000-yard campaign.

The Browns are 8-3 on the season, eyeing up a first trip to the playoffs in 18 years, thanks in large part to their league-leading run game (1,775 yards).

“The Browns are one of those squads that has surprised everybody,” added Brandt. 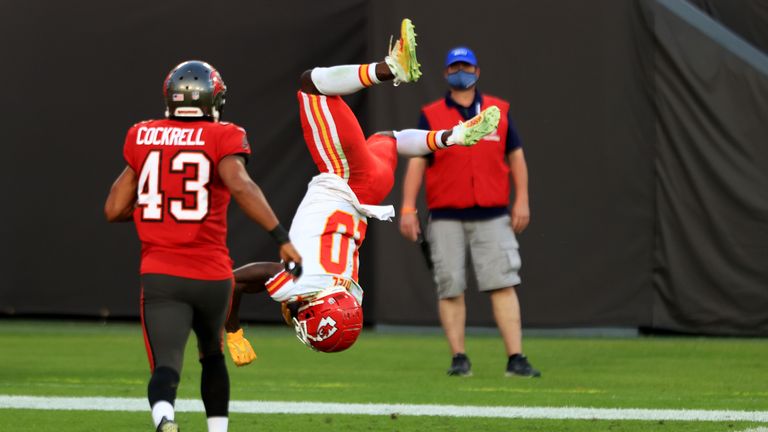 “I’m not sure if they’re experienced enough in the month of December to close this out. I also can’t say that I’m completely sold on [quarterback] Baker [Mayfield].

“This is the best backfield in the NFL.”

Cleveland’s opponents on Sunday boast an identical 8-3 record, in a loaded AFC playoff race. ‘The best backfield in the NFL?’ Maybe… But do they have the best player in the league?

“Derrick Henry is the single-most significant player in the NFL,” said Burleson, believing Henry could even be the first running back to win the league MVP award since Adrian Peterson in 2012.

“I feel like he should be in the lead for MVP votes right now. 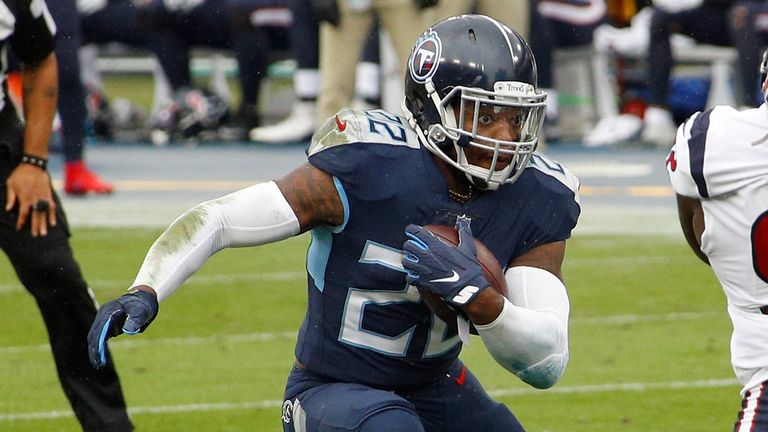 “He is playing so well – and he heats up at this time of year. Imagine that; history tells us that he only gets stronger and faster as the weather gets colder and uglier.

“If it wasn’t for the Chiefs having this amazing comeback in the AFC Championship game last season, he would have ran his team right into the Super Bowl.

“I feel like with the way that Henry is running, and against strong defences, he could be the one that changes everything.”

Watch Derrick Henry, Nick Chubb and Kareem Hunt all in action when the Cleveland Browns travel to the Tennessee Titans on Sunday, live on Sky Sports NFL from 6pm.