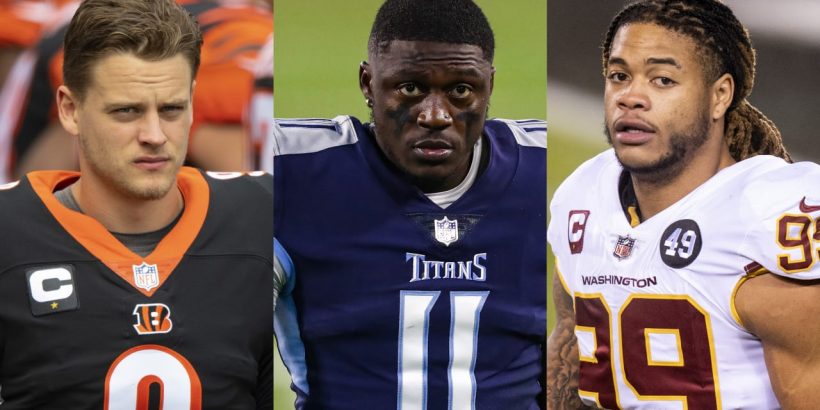 In the dog days of the NFL offseason, hope springs eternal. Optimism reigns across the league. Contending teams are bullish on their prospects for 2021. Rebuilding teams are keen on the new direction of the franchise. Individual players and coaches become the subjects of flowery profiles.

In short, this is Bandwagon Season.

So, with hype emerging from every NFL nook and cranny, what can we truly believe in? Here’s my annual rundown of bandwagons you should hop on, Schein Nine style:

In a BOLD PREDICITONS installment of the Schein Nine a couple weeks ago, I wrote that Julio Jones would be traded to Tennessee and the Titans would win 11 games. Well, the trade happened. And now those 11 wins — along with a third consecutive playoff berth — are on the way.

This was a fantastic deal for the Titans, a monster transaction. Jones is a future Hall of Famer. He’s one of the most talented receivers in the last 30 years. Yes, he’s 32 years old and missed seven games last year due to thigh and hamstring injuries. But he still produced at a high level when he played, as evidenced by his average of 2.60 yards per route run — the fourth-highest figure in the league, per Pro Football Focus. I think he has plenty of gas left in the tank. And in Tennessee, he’s the third wheel of the Titans’ offensive weaponry.

This is still Derrick Henry﻿’s show. And all A.J. Brown has done in his first two NFL seasons is post a pair of 1,000-yard campaigns, averaging a robust 17.4 yards per catch and scoring 20 touchdowns in the process. With Jones joining Brown on the outside, opponents can’t stack the box like they used to against Henry, which feels unfair. In the wake of this transaction — and on the verge of the league’s first 17-game regular season — a second consecutive 2,000-yard season from Henry doesn’t feel bold, it feels right. And Jones will see more single coverage than he has since Roddy White was in his prime. That’s frightening. Brown and Jones could be THE elite receiver duo in 2021. The key is to continue forgetting what you thought about the Miami version of Ryan Tannehill﻿. I’m guilty of living in the past on that front at times, but Tannehill’s been undeniably terrific in Nashville. And after the veteran quarterback lost Corey Davis and Jonnu Smith in free agency, this trade is a huge offseason savior.

Mike Vrabel is a fabulous coach. This offseason, the defense added some needed pass-rushing juice (free agents Bud Dupree and Denico Autry﻿) and swapped in two notable cover men (first-round pick Caleb Farley and veteran Janoris Jenkins﻿). Kansas City is the best team in the AFC, and the Chiefs’ opponent in last season’s conference title game, Buffalo, is No. 2. But after that? Well, this trade tosses Tennessee into the conversation with Cleveland, Baltimore and Indianapolis. Hop on board now. This bandwagon’s gonna fill up quickly once the season kicks off.

The Justin Herbert bandwagon is full. I’ve been riding since before the 2020 NFL Draft. And now, in the wake of perhaps the most impressive rookie season ever by a quarterback, there’s just no vacancy. Sorry.

But don’t forget about the No. 1 overall pick from last year’s draft. Burrow was rocking and rolling before last November’s season-ending knee injury. Fortunately, it appears Burrow’s humming right along on the road to recovery, throwing bombs at OTAs earlier this month. Looks like he’ll be ready for Week 1, and I can’t wait. This cat has “it.” He’s what you want in a franchise quarterback, and he’s going to be a superstar, especially with the weapons at his disposal. Burrow showed a nice rapport with Tee Higgins and Tyler Boyd in Year 1, and now old friend Ja’Marr Chase joins the fun. I loved the pick at No. 5 overall. Chase is going to be in the mix for Offensive Rookie of the Year. Remember what Burrow and Chase did together two years ago? They owned college football, guiding LSU to a national title, with Burrow winning the Heisman Trophy and Chase nabbing the Biletnikoff Award. I can’t wait to watch their swagger in Cincy. And I think Joe Mixon﻿’s due for a major bounceback after an injury-riddled 2020 campaign.

Questions remain on Cincy’s defense, but the offense is going to put points on the board with Burrow and his cavalcade of playmakers.

Like I said just above, the ﻿Justin Herbert﻿ bandwagon currently has a waiting list. But you can still get in on his new coach!

As I wrote back in March, the Chargers are my Cinderella squad for the 2021 NFL season. A lot of that is indeed due to Herbert, a special talent fresh off a record-setting debut. Still, I’m bullish on Los Angeles’ first-time head coach. He’s just SO well-regarded by everyone who has been around him. Last season with the Rams, in Staley’s first year as an NFL defensive coordinator, he churned out the No. 1 scoring and total defense in the league. That unit undoubtedly had special talents in ﻿Aaron Donald﻿ and ﻿Jalen Ramsey﻿, but what do you call ﻿Joey Bosa﻿ and — when healthy — ﻿Derwin James﻿? The offense will keep rolling with Herbert under center, and the defense will maximize its talent with Staley at the controls.

Historically, attention to detail and culture have let the Chargers down. That’s about to change. The Bolts were wise to invest in Staley. You should, too.

The second-year wideout is poised for a BIG season with a healthy jump in production. Fittingly, he’s practicing with a bracelet featuring the catch phrase Terrell Owens liked to utter during his own days in Dallas:

“Get your popcorn ready.”

Consider it done — and give me a little butter and salt with that aforementioned output bounce. Lamb has star written all over him. His 2020 was quite good, with 74 catches for 935 yards and five touchdowns, but he’s about to be great. With a full season of Dak Prescott under center, Lamb can blow past those figures. That’s the kind of talent we’re dealing with here.

Justin Jefferson rightly got the bulk of the love in last year’s receiver class. After all, he set a rookie record with 1,400 receiving yards. He was terrific — and will be for a long time. I still love Jerry Jeudy﻿, too. I think he’ll iron out the drops, and with better quarterback play, his supreme route-running will torch defenses. But Lamb will be the best of the bunch. Buy stock. NOW.

Young was the Defensive Rookie of the Year, and I still don’t think he got enough love. This dude is an absolute force of nature off the edge. This coming season, he’s going to be one of the top five defensive players in the league. Young sacked the quarterback 7.5 times last year. He will double that — at least — in 2021.

With Young headlining a ferocious front, Washington has a true identity. Opposing teams — and especially opposing quarterbacks — are not going to enjoy games against this group.

Playoffs! And this time, I mean it.

I predicted big things for the Cardinals prior to last season. And that premonition looked pretty good when Arizona was 5-2. But the Cards petered out down the stretch, at least partially because injuries — most notably, the season-ending injury to Chandler Jones and the nagging ailments for Kyler Murray — began to take their toll.

But I think it all comes together in 2021. Kyler is ready to burst into legit MVP candidacy in Year 3. He’s comfy in Kliff Kingsbury’s offense, and Arizona has the right personnel for the attack. J.J. Watt teaming up with Jones is going to be special on the defensive front. And Steve Keim cleaned up in the draft, nabbing players who will make instant impacts on both sides of the ball.

Don’t jump off the Tua Tagovailoa bandwagon! Sure, he’s no Herbert. Miami should’ve drafted Herbert. But that’s water under the bridge. And I remain a staunch supporter in Tua’s ability. Last year, he was A) coming off a major hip injury; B) entering the NFL amid a global pandemic that erased normal offseason workouts and preseason games; and C) surrounded by a lackluster offensive cast. The humble signal-caller was very disappointed with his rookie season when he spoke to me on SiriusXM Radio before the Super Bowl, but all things considered, I thought it was a pretty typical first-year campaign, with ups and downs. It was normal. Now, he knows the deal. He knows the offense. He gets a full offseason. And he can lead.

Oh, and did I mention that the Dolphins just drafted his old Alabama teammate, Jaylen Waddle? The explosive playmaker will have a Tyreek Hill﻿-like impact on the offense. And Miami also added Will Fuller in free agency; when healthy, the guy’s a true home run hitter. Put those two alongside DeVante Parker﻿, and suddenly, Tua’s cooking with gas in the passing game.

Brian Flores received my vote for Coach of the Year last season. And his defense, which allowed the sixth-fewest points in football in 2020, will be stingy once again. First-round pick Jaelan Phillips could be just what the doctor ordered on the edge-rushing front.

The division is tough. The conference is tougher. But I warn you: Never sell a Flores-led team short.

I am very high on the Rams this year, believing they will represent the NFC in the L.A. Super Bowl. Akers is a huge part of that. He became the guy at running back down the stretch last season, and it changed the Rams’ offense. While Jared Goff was morphing into a double agent at quarterback — giving the ball to the other team at an alarming rate — Akers was emerging as a star.

Everyone took notice during his boffo effort in the Week 14 win over the New England Patriots on Thursday Night Football. Twenty-nine carries for 171 yards against Bill Belichick’s defense turns heads. But that wasn’t a one-off. The guy was a stud in L.A.’s two playoff games, piling up 221 rushing yards and two touchdowns, along with 51 receiving yards.

I spoke with Sean McVay on SiriusXM Radio a few weeks ago, and the Rams coach raved about his running back’s versatility. He’s clearly excited about what Akers can offer in Year 2. I think the former second-round pick can become a legit top-10 running back this year for a championship-caliber team. I loved Jonathan Taylor and D’Andre Swift at running back in the 2020 draft. I’m still on board, especially with Taylor. But don’t sleep on Akers.

This is a future play. But I’m in. I love Campbell’s toughness and general approach. It’s contagious. And the Lions, who have been rebuilding since 1957, needed this kind of figure. Campbell also put together a sensational coaching staff, featuring gems like Duce Staley, Aaron Glenn and Anthony Lynn. It’s gold. And I couldn’t stop watching the reaction from Campbell and new GM Brad Holmes when they drafted offensive tackle Penei Sewell, who will represent toughness and greatness. Campbell and Holmes are culture-changers — and Sewell’s a culture-changing player.

The 2021 season won’t be easy, but I think we’ll see the seeds of change with the franchise. Campbell will run the ball with ﻿D'Andre Swift﻿ and try to win games in the trenches, where the Lions are pretty stout on both sides of the football. ﻿Jared Goff﻿ was undoubtedly subpar last season, but he can still play when he’s well-protected and stays within himself.