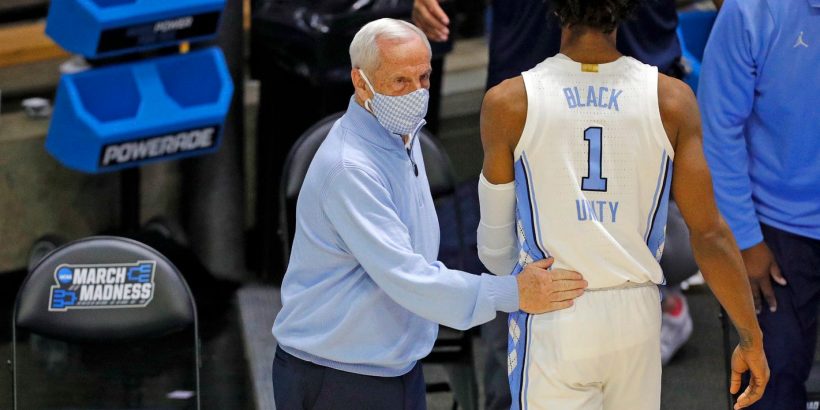 WEST LAFAYETTE, Ind. — North Carolina had been pegged as an NCAA Tournament dark horse based almost entirely on name recognition, since programs of the Tar Heels’ pedigree don’t lose 19 games one season and then bow out early in the tournament a year later. Right?

No. 9 Wisconsin breezed past No. 8 UNC 85-62 Friday in the first round of the South Region, disassembling a team whose regular-season faults and shortcomings were carried along seamlessly into the postseason.

"I started the season when I was 70 years old and I feel like I'm 103," UNC coach Roy Williams said. "It's been a difficult year. But everyone's had the problems with COVID that we've had. It's been a hard year to push and pull, push and pull every other day to get something done."

The Badgers advance into a second-round matchup with top-seeded Baylor. The Tar Heels limp into the offseason short on answers, stuck in a deeper rut than at any point in Williams' tenure.

In the season of the struggling blueblood, UNC became the latest to bow out ungracefully, following in the footsteps of fellow historic powers Duke and Kentucky, which missed the tournament entirely, and Michigan State, which was ejected in the First Four by UCLA.

The game was tied once, at 2-2, and then expanded to 40-24 at halftime. UNC drew within 12 points seven minutes into the second half but threw in the towel as the Badgers closed on a 30-19 run.

The loss was brutal enough to raise a question: Is it better to stay home entirely, like the Blue Devils and Wildcats, or to be blown out by a fellow Power Five opponent in prime time on the tournament's opening night?

Only once in program history, in 1999, had the Tar Heels been knocked out in the first round. Never in his previous 29 trips into tournament play, at Kansas and UNC, had Williams failed to at least advance into the second round. The program has been bounced by double-digits by a lower seed in its past three tournament appearances, joining a 21-point loss to Texas A&M in 2018 and a 17-point loss to Auburn in 2019. With a final record of 18-11, the Tar Heels will fail to win at least 20 games in consecutive seasons for the second time since 1965-66.

The embarrassments are quickly piling up for a program quickly becoming accustomed to relying on excuses, such as youth and inexperience, to explain away a sudden turn from championship contender to second-tier status in the ACC.

As it turns out, an inability to shoot from deep, prevent others from doing the same and avoid turnovers can be an issue in postseason play.

Ranked 224th nationally in turnover margin entering the tournament, UNC committed 10 turnovers to Wisconsin's seven. Ranked 307th in 3-pointers per game and 269th in 3-point percentage, the Tar Heels made 5-of-13 attempts from deep even as the Badgers' defense sagged back to combat a size disadvantage. Meanwhile, Wisconsin made 13-of-27 attempts and shot 50.8% overall.

"I don't think we allowed them to do anything," Williams said. "In basketball particularly it's man-on-man at times. We weren't good enough or experienced enough or coached well enough or all of the above tonight. It's frustrating, guys."

But the issues may run deeper. Wisconsin looked more talented. Certainly more cohesive. The Badgers had a game plan; the Tar Heels looked lost at first and then listless, with not even a minor run coming out of halftime to suggest any adjustments to meet Wisconsin's blueprint. The season ended as it had progressed into March: With UNC falling well short of expectations.

"When you start talking about inexperience or youth or seven freshmen, that sounds like excuses," Williams said. "But those are facts. I think we have the foundation that can be really something. The foundation here is something that could be really, really special."

The only hope is that Friday's tournament thud sparks a return to championship contention. With a youthful roster set to return, there's some reason for optimism.

But if you take the name out of the equation, what evidence has UNC presented to make you believe a rebirth is around the corner?