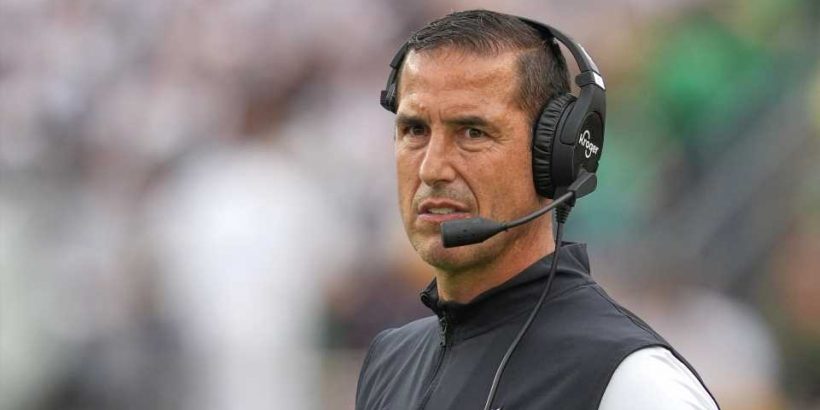 Notre Dame could make the College Football Playoff and hire a new coach in the same season.

Kelly passed Knute Rockne as Notre Dame’s all-time winningest coach in 2021. Kelly is 113-40 with the Irish. Notre Dame finished 11-1 in the regular season in 2021 and has a chance to make a third College Football Playoff appearance. Would Kelly finish the season if he took the LSU job?

That is one of the head-spinning questions, but the replacement list for the Irish would lead with yet another coach who might challenge for the playoff.

That Notre Dame list would be short, with four primary candidates for the job:

Fickell will be the lead candidate for the job, and SN outlined all the reasons why before this year’s showdown between the Irish and Bearcats. Fickell is 47-14 in five seasons with the Bearcats and has the program on the cusp of being the first Group of 5 school to make the playoff. Fickell was an assistant at Ohio State from 2002-16 before that. He has strong recruiting ties in Ohio, and that has helped build the Cincinnati roster. He could bring those to Notre Dame, and the transition would be easy if he could retain defensive coordinator Marcus Freeman. An added bonus? Notre Dame’s opener next season is at Ohio State.

Freeman, 35, could be a candidate for the Notre Dame and Cincinnati jobs. Per Notre Dame beat writer Pete Sampson of The Athletic, there is already talks at Notre Dame to elevate him.

He was the defensive coordinator under Fickell with the Bearcats from 2017-20, and Notre Dame is 11th in the FBS in scoring defense at 18.3 points per game. Freeman also is a former Ohio State player with strong midwest ties, and he was in the running to be LSU’s defensive coordinator last season. It’s a big step up from coordinator to head coach, especially at a blue-blooded program like Notre Dame. Freeman figures to benefit whether he stays with the Irish or replaces Fickell at Cincinnati.

Could you imagine if this is Meyer’s return to college football? Meyer has called Notre Dame a “dream job” on multiple occasions, and it’s a scenario that has been played out for years. Meyer is the coach with the Jacksonville Jaguars, who are 2-9 in his first season. How long will that NFL stint last? There is no question Meyer can coach at the college level.

He’s 187-32 through stops at Bowling Green, Utah, Florida and Ohio State. He won three national championships, and he’s one of the best recruiters of all time. The stints with the Gators and Buckeyes ended unceremoniously, however, and Meyer turned down speculation that he would be interested in USC. But this is Notre Dame. Is it still a dream job?

There is a chance that Notre Dame would need another strong candidate, and Campbell would likely be that guy. He has done an outstanding job building Iowa State into a Big 12 contender. The Cyclones had a disappointing 7-5 season, but Campbell played at the most dominant Division III program in the country in Mount Union of the Ohio Athletic Conference. He’s a master culture builder, and we’ve been wondering the last few cycles what he would do with more resources. This would be the chance to find out, and we wouldn’t be surprised if Campbell maintained Notre Dame’s run.