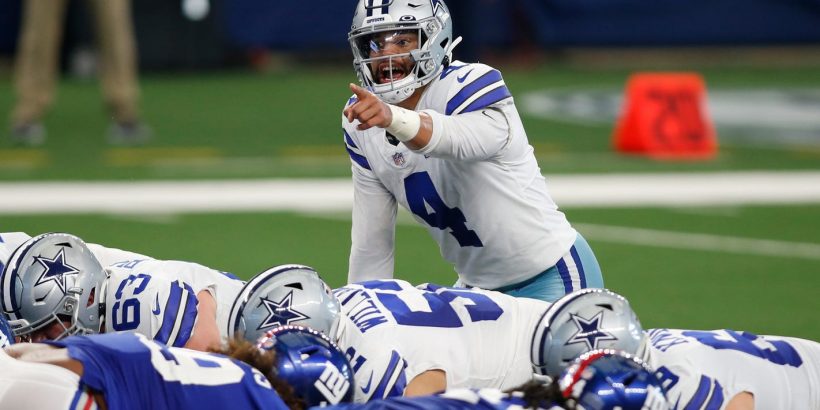 You know how it goes with this annual rollout of the NFL schedule. There’s the anticipation for marquee events, like Tom Brady heading back to New England. An Aaron Rodgers-Patrick Mahomes matchup. (Well, maybe). A menu of playoff rematches. Surely. Divisional rivalries renewed. All good.

Then stuff happens. Some star quarterback is knocked out with a season-ending injury. A team that you thought was on the verge of being a contender turns out to be a dud. Surprise teams emerge. By late November, that Dolphins-Panthers matchup is in the mix to be flexed.

The uncertainty of the NFL — for 31 consecutive seasons, at least four teams made the playoffs after missing the postseason the previous year — has taught me to get only so excited about the projections in May. But this year, there’s an extra boost to the equation: 17 games.

Dak Prescott and the Cowboys will head to New England for a Week 6 clash with the Patriots. (Photo: Tim Heitman, USA TODAY Sports)

In expanding the NFL’s regular season for the first time since 1978, there are built-in perks. After last year’s tenuous-but-so-commendable feat by the NFL in playing a full schedule during a pandemic, NFL loyalists deserve at least that.

But sorry, Jason Garrett. The chances of a team finishing 8-8 are kaput, although 8-8-1 is still a possibility.

As the new schedule was released Wednesday night, I was just as interested to see how that 17th game fell as I was with the usual exercise of seeing which teams got a raw deal on the travelogue, or where the bye weeks fell. And boy, wasn’t that late bye last season a boon for TB12 and the Bucs, part of the fuel to regroup for the stretch run that ended with a crown.

Maybe after so many years, there just had to be something new to assess.

That Chiefs-Packers game slated for Nov. 7 at Arrowhead Stadium is the gem of the extra games, assuming Green Bay somehow convinces Rodgers to stay.

The NFL’s formula for determining the 17th game falls right in line with typical parity measures; matching teams from different conferences that finished in the same slot in their divisions the previous year. For instance, the AFC East teams draw the NFC East. And with the formula dictating that the AFC teams will host the extra games this year, flipping to the NFC next year, it's why the Cowboys are headed to New England for a Week 6 clash.

THE WORST: Avert your eyes from these duds

The first of the “17th" games comes in Week 3, with a seemingly mediocre Carolina at Houston contest. But trust me, it gets better.

In Week 17, the Rams are at Baltimore. Lamar Jackson, meet Aaron Donald. Under the 16-game format, this matchup doesn’t happen. I’ll go out on a limb now and say it will have huge playoff implications.

Others with pop: Seahawks at Steelers, the Week 6 Sunday night showcase. That same week, Arizona is at Cleveland in a sneaky good matchup that may tell us more of whether the strides those teams took last year are still flowing. In Week 12, the Bucs are at the Colts … more compelling if Carson Wentz gets his groove back while reuniting with Frank Reich.

These are some of the perks coming your way. When the NFL officially instituted the 17-game schedule a few weeks ago, our Nate Davis ranked the extra games, knowing the matchups without the dates.

It’s possible, though, that he sold the Detroit-Denver affair in Week 14 a bit short as his next-to-worst of the 17 games. I mean, if Rodgers winds up in Denver, as has been widely speculated as a potential landing spot for the reigning MVP — as ridiculous as that sounds — the Lions would have quite the opening to contend for the NFC North crown under their new head coach (Dan Campbell) and quarterback (Jared Goff). The Broncos would be must-see TV. We’ll see. Maybe it is next-to-worst.

Regardless, the NFL, as it is prone to do, has come up with a way to sell it all: Biggest Season Ever!

True, there will be 272 regular-season games after so many years of 256. But more is not always better. With the potential injury toll of an extra game and the enticing matchups offset by a few more “dog” games to water down the product, just don’t call it the best season ever. Not unless it happens.