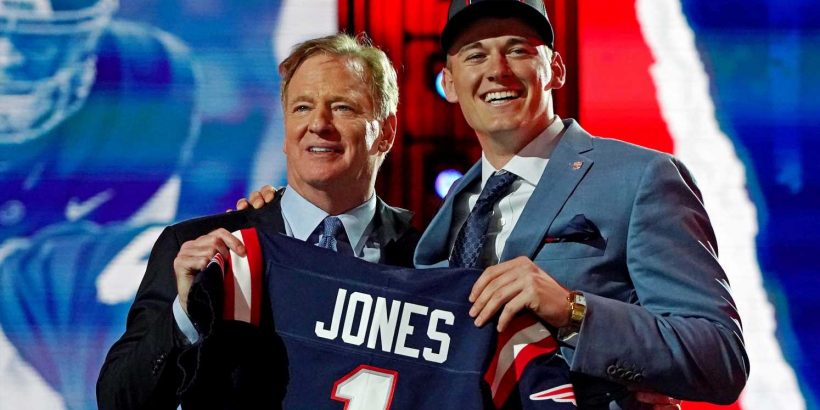 Mac Jones is a Patriot now. Good thing, because the former Alabama quarterback walks, talks and sounds like a Patriot.

That was so striking during his Zoom media conference on Thursday night, when he served up all sorts of humble pie and said stuff like, “do your job,” which sounds a whole lot like Bill Belichick. Jones insisted whatever he did in the past doesn’t matter moving forward … kind of like how Belichick would say it. He talked about how he just loves good football, which reminds me of how Belichick once declared that he was “on a crusade for good football."

Check the box. This kid is a cultural fit. Maybe even a Cyborg.

When someone asked him about competing against Cam Newton for the starting gig, here’s how Jones replied:

“I’ve never played in the NFL. I don’t know what it’s like. I’m just going to go in there and work really hard, like I always have and I always will. Cam has earned the respect of the team already. My job is to support him and help them become better players, if I can.

"I’ve never played in the NFL, but I’ve seen good football. I know I can help them with anything they need, taking notes or taking stress off their minds. So, I’m just going to be the great teammate that I know I can be.”

Of course, this is where Jones, picked 15th overall as the fifth quarterback drafted, wanted to be. Sure, that’s what they all say. But in watching the draft and listening to the reactions over the course of the first round, I’m convinced that Trevor Lawrence wanted to land in Jacksonville (no-brainer), that Penn State linebacker Micah Parsons really wanted to be a Dallas Cowboy and that, yes, Jones wanted to take his game to Foxborough.

Never mind all of those mock drafts that pegged him going to the 49ers with the third pick. Jones was all-in as a Patriots fan. Turns out, that “Mac to San Fran” stuff was hogwash as the 49ers pulled a stunner and picked North Dakota State’s Trey Lance (who surely wanted to land in San Francisco, too).

MORE: Team-by-team look at all 259 selections

“At the end of the day, you just kind of want to get the right fit,” Jones said. “Secretly, I really wanted to go to the Patriots all along. So I’m actually really happy that it happened. But it doesn’t really matter. You get picked and you’ve got to take the opportunity and take advantage of it.”

That the Patriots, seeking to develop a long-term quarterback as Brady chases more Super Bowl rings with the Bucs, didn’t have to jump through hoops and trade up for Jones seemed like some sort of karma.

'I missed a lot of those mock drafts'

Belichick didn’t directly answer the question of whether he pondered trading up to land Jones (remember, the Broncos, picking ninth, might have been an option, and the Bears moved up to draft Justin Fields in the 11th slot). He stayed pat and still got his man.

And as Belichick is prone to do, he dismissed the question by maintaining that he didn’t have any expectations of how the board would fall (yeah right, BB), and whether Jones would be available.

“Honestly, I missed a lot of those mock drafts,” Belichick deadpanned. “So I really wasn’t familiar with where everyone wasn’t going.”

But still: Of the five quarterbacks drafted on Thursday night, the one Belichick picked has the least physical talent. Jones is kind of stiff in the pocket, especially when compared to Lawrence and Fields. His arm strength is considered only average, certainly not in the range that Lance and Zach Wilson possess.

I’m guessing Belichick is fine with that, especially given all of the winning with Brady — whose body reminds Jones of his own body. The physical traits go only so far in the NFL. I mean, Ryan Leaf and JaMarcus Russell, two of the biggest draft busts in history, were imposing specimens with cannon arms. And Brady is still rolling at 43.

The book on Jones begins with football IQ, which by the way had a lot to do with his off-the-charts, 77% completion-rate accuracy. He clearly benefited from being at Alabama, winning a national championship while surrounded by so much blue-chip talent — wide receivers DeVonta Smith and Jaylen Waddle, running back Najee Harris and left tackle Alex Leatherwood were also drafted in the first round off Alabama’s powerhouse squad — and never had to pull out games by putting the team on his back.

Yet the other big benefit was Nick Saban, the ‘Bama coach who happens to be one of Belichick’s closest friends. Again, perfect Patriot.

Belichick flatly contended Thursday night that nobody knows more about football than Saban — on any level. He knows what he’s getting in a Saban-prepared quarterback, one who understands offensive design, defensive adjustments and weaknesses. One who is richly schooled on fronts and coverages and can anticipate blitzes.

Even so, this is hardly the time to declare the Patriots have their next TB12. As much as cultural fit matters, it’s much deeper than that. There are no guarantees. Whether Jones succeeds or not will come down to performance and whether he passes the master classes coming from Belichick and O-coordinator Josh McDaniels.

No doubt, Saban has prepared him for this. But leave it to Belichick to express the reality check.

“This is a different level,” Belichick said. “And the things that happen in the NFL, we have more time, more scheme, the players are more advanced physically, they have much more experience. And so what’s going to happen at this level is going to be more complex … more difficult than what happened at the last level, just like it is (in going from) high school to college.

"That takes time, that takes some adjusting to. Was he good in college? Yeah; I mean everyone that was drafted (Thursday) was good in college … How that moves ahead, we’ll see. We’ve got a lot of work to do. It’s a long road, a big grind. But that’s what we all signed up for. We all have a long way to go.”

Jones sounds like he’s ready for the challenge. Sounds Brady-like when thinking of what it will be like advancing from Saban to Belichick.

“At the end of the day, he’s the coach and I’m the player,” he said. “I’m just looking forward to him kind of coaching me hard and take good coaching. That’s what it comes down to.”

What does that mean?

“Just what I said,” Belichick grumbled.

For how long? Belichick grumbled some more.

“I don’t know,” he muttered. “Somebody would have to play better than he does.”

In other words, the Patriot Way is still in full effect — just as Jones knew it would be.