Just when the Bucs seemed primed to serve notice that they are a legitimate Super Bowl contender with Tom Brady in tow, they ran into Murphy’s Law.

Everything bad that could happen did happen.

How embarrassing. Before a national TV audience in primetime, the Bucs took a 38-3 pummeling for the ages. There was no Brady magic, no Antonio Brown boost, no Gronk moments, no chance.

Brady was brought to Tampa and signed to a two-year, $50 million contract for games like these.

Or so it seemed.

Turns out, Brady suffered the worst loss of his career in his biggest game yet for the Bucs. 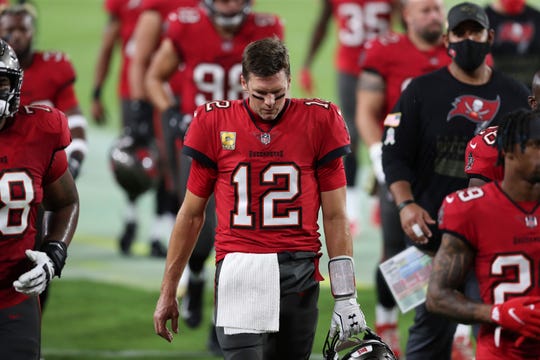 Tampa Bay Buccaneers quarterback Tom Brady (12) reacts as he leaves the field at the end of the first half of an NFL football game against the New Orleans Saints Sunday, Nov. 8, 2020, in Tampa, Fla. (Photo: Mark LoMoglio, AP)

Think about it: Brady logged the 333rd start of his illustrious career on Sunday night and it was first time in those 333 games that he trailed by 30-plus points at the half.

It ended with a 35-point deficit that was even worse than that 31-0 loss with the Patriots in the 2003 season opener at Buffalo, aka “The Lawyer Milloy Game.”

Rather than taking a huge step forward, the Bucs (6-3) took two steps backward as they failed a major litmus test.

“It was shocking,” summed up a dejected Bucs coach Bruce Arians.

Like the rest of us, there’s no way Arians saw this coming. Not with the Bucs riding in with a three-game winning streak. Not with the way the Todd Bowles-coordinated defense handled Aaron Rodgers and the Packers a few weeks ago. Not with all of the star power added to the offense.

“To watch us practice the way we practiced all week and the confidence we had coming in…we have to go back and look in the mirror as coaches, players, everybody,” Arians said.

Here’s some good news for the Bucs: It only counts as one loss in the standings.

The flip side: This happened against the Saints, the bullies of the NFC South. If the Bucs can’t handle New Orleans, aiming for a fourth consecutive division crown, then how in the world can they expect to play themselves into the Super Bowl mix?

The Saints have swept the Bucs in back-to-back seasons and won five straight in the series. This has to feel a bit strange for Brady, after all of the years ruling the AFC East with the Patriots.

In 20 years in New England, Brady was never swept by a division opponent.

Now he switches conferences and encounters the Saints, whose quarterback, Drew Brees, is engaged in an arms race with Brady for the NFL’s all-time career touchdown pass mark (updated tally: Brees, 564-561).

The Saints surely have no mercy on TB12. Of his seven interceptions this season, five have come against New Orleans, which won in Brady’s Bucs debut.

But it went way beyond the picks. The Saints battered the 43-year-old Brady with three sacks, nine quarterback hits and other forms of pressure and harassment. The protection was spotty, but the game conditions even worse. The Bucs were down 21-0 before they even managed a first down, squashing any legitimate plans for a balanced offense. Tampa Bay ended the night with just 8 rushing yards – on all of five carries.

The game turned quick and landed squarely on Brady’s shoulders. And that was too much to bear.

“I certainly have to play a lot better,” Brady said. “Turning the ball over against good teams never helps. We just didn’t plat the way we were capable of playing. Everyone’s got to go a lot better and it starts with me. Get back to work tomorrow morning and try to make it a better week.”

The Saints defense could not have drawn up the scenario any better. With a fat, early lead, it quickly became a matter of teeing off on Brady.

“Our job was to get Tom Brady off his spot, because he throws it hot,” said Saints defensive end Cameron Jordan. “He’s still the second-greatest quarterback for a reason.”

The typically colorful Jordan will never hail any quarterback as greater than Brees. Never mind that Brady has six Super Bowl rings – five more than Brees.

Besides, in the here and now, Brees has the upper hand now.

If Brady’s going to ultimately win another ring, it’s a good bet that he’ll have to go through the Saints to get it. After Sunday night, Brady and the Bucs found out that they still don’t measure up.