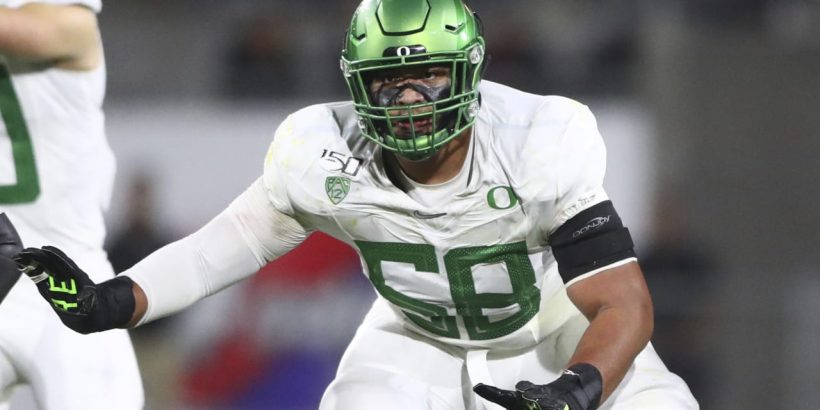 After sitting out the 2020 college season, offensive tackle Penei Sewell remains a top-10 pick and could hear his name inside the top 5 later this month.

The Los Angeles Chargers are one of the teams in need of left tackle help and just so happen to have Sewell’s former teammate, ﻿Justin Herbert﻿, under center.

On Monday, Sewell allowed himself to consider what it would be like blocking for his former college QB once again.

“To block for Herb again, man,” Sewell said, via SI.com. “I think it’s another dream and another, I guess a vision that would be fun, just like you said I blocked for Herb throughout this whole time I’ve been here in Oregon, and to have that chance, again to share the same field as him would be a dream come true.”

Sewell said he’s spoken to the Bolts brass during the pre-draft process.

“I’ve been talking to the Chargers. … Conversations have been made,” said Sewell.

It’s a nice sentiment to consider a Sewell-Herbert reunion. However, the reality remains that the offensive tackle most likely isn’t going to be on the board when the Chargers select at No. 13 overall. L.A. would need to trade up to secure the OT if that’s its target.

Left tackle remains the most significant need for the Chargers. Unless they are willing to give up assets to move up, however, they’ll likely have to settle with an option who didn’t protect Herbert in college.

Sewell could go potentially as high as No. 5 overall to the offensive line-needy Bengals. With the Carolina Panthers (No. 8) trading for QB ﻿Sam Darnold﻿, the offensive line is their biggest priority heading to the draft. A player like Sewell falling into their laps would be a big boon for the Panthers.

Whichever team selects Sewell, the young offensive lineman is ready to plow the road and protect his QB.

“I like to play real physical,” Sewell said, via the Detroit Free Press. “I like to use my body type to my advantage and to really get up under people’s chin and to really showcase my mentality (that) I’m coming off the ball every play with violent intentions and that nothing less is coming from that.”