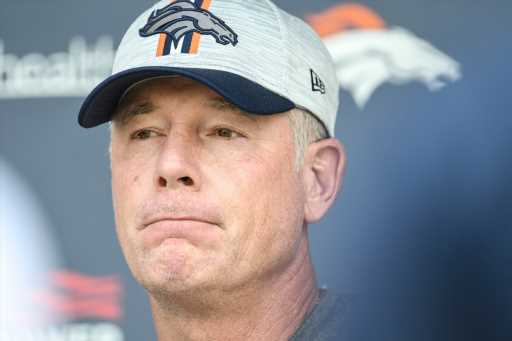 PITTSBURGH – Hold their beer. The Broncos are trying mightily to make dang fools of themselves again.

A team with no proven leadership, no offensive imagination and no margin of error has lost that loving feeling. Denver is on a losing streak for the eighth time in Vic Fangio’s short tenure as coach.

“We can’t let this feeling of losing linger,” Broncos quarterback Teddy Bridgewater said Sunday, after a too-little, too-late comeback resulted in a loss to a bad Pittsburgh team.

Who do you trust to straighten this mess out, before two losses become three or three defeats snowball into four, as yet another NFL season in Denver gets dragged through a puddle of tears and regret?

Well, it’s probably not Fangio. In the week after a loss, Uncle Vic’s record in Denver is now a very shaky 3-8.

Offensive coordinator Pat Shurmur? Please. I wouldn’t loan Shurmur a pencil to take my cocktail order, let alone trust him to write up a game plan that is coherent, much less bold.

With a team that hasn’t made the playoffs in five long seasons now faced with adversity, who are the leaders in the locker room that can stand alongside Bridgewater and quash the self-doubt? Linebacker Von Miller finds his peace in being a happy prankster. Offensive guard Dalton Risner is too big for his britches. Courtland Sutton makes for a better playmaker than inspirational orator.

Simmons must now be counted on to earn his $15.25 million per annum by not blowing up ball-carriers, but also by emboldening the fighting spirit in his teammates.

After starting the season 3-0, Denver has dropped two games in a row in shockingly similar fashion. Just as the Broncos did against Baltimore at a mile above sea level, they went down by the river in Pittsburgh, grabbed a shovel, dug an enormous hole and fell into it.

“We can’t wait until we get in a hole,” Denver running back Melvin Gordon said.

The Broncos fell behind 24-6 before staging a furious fourth-quarter comeback that was tantalizing but ultimately proved to be unsatisfying, when a pass Bridgewater desperately flung in the direction of Sutton was intercepted by Pittsburgh cornerback James Pierre in the end zone in the final seconds.

Although the veteran savvy of Bridgewater is an upgrade over the mindless gunslinging of Drew Lock, the numbers don’t lie. And statistics suggest this Denver offense is imperceptibly better than the attack Lock directed a year ago.

The Denver offense of 2020 averaged 20.2 points per game. This year? 20.4 points per game. Stadium grass grows faster than Shurmur’s offense moves down the field. In a span of more than nine quarters of football and more than 140 minutes on the clock, from late in the first half against the Jets until the fourth quarter at Pittsburgh, the Broncos scored exactly one touchdown.

What’s the common denominator? Shurmur and his offensive recipe, which is as outdated and unimaginative as Hamburger Helper.

How can the Broncos jump-start their offense?

“We’ve just got to have some energy. We might need to do like the colleges and do goal-line (drills) in the pre-game. Just bash heads or something, get the blood flowing, the juices flowing,” said Bridgewater, whose suggestion made me shake my noggin in disbelief, considering he suffered a concussion last week.

After escaping from under the painfully conservative imprint of Shurmur’s thumb, Bridgewater threw for over half his 24 completions and nearly 65% of his 288 passing yards in the final quarter.

“We’ve got to find ways to win more of the close ones,” Simmons said, “because that’s what the good teams do.”

It doesn’t get any easier for the Broncos. They are scheduled to play Las Vegas and Cleveland within a span of roughly 100 hours.

Are those must-wins? Well, put it this way: Lose both games and somebody will get run out of the team’s Dove Valley headquarters.

Hey, nobody will ever hire me to coach in the NFL. But even my untrained eyes can see the five touchdowns Denver has scored prior to halftime through five games doesn’t allow Miller and his defensive mates to tee off and wreak havoc.

So why wait to fire Shurmur until after the season is already lost?

If Uncle Vic wants to salvage a playoff dream and save his own job, he should seriously consider replacing his offensive coordinator right now, before the Raiders get to town.

Where have we seen this movie before, and why does it remind us of Dumb and Dumber?

If my flimsy memory of NFL history can be trusted, no team that has started 3-0 has ever finished with a 3-14 record. The Broncos wouldn’t dare. Would they?