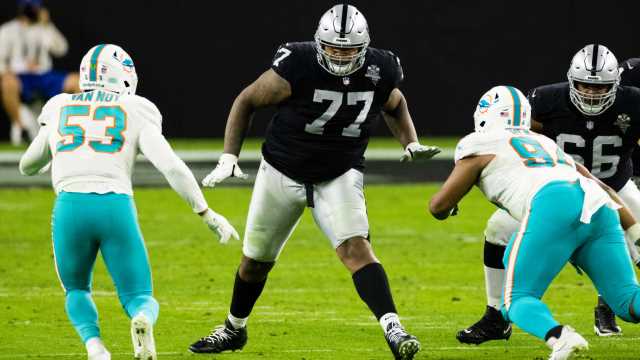 The Patriots are making a big splash in advance of free agency, bringing back a familiar face to do it.

New England is expected to trade for Raiders offensive tackle ﻿Trent Brown﻿, sources say, with the two sides coming together on a deal that was a few weeks in the making.

Brown has reworked his deal, agreeing to a new one-year contract as part of the agreement, per sources, allowing him to be a free agent after the 2021 season. Previously, he had two years and 19.25 million left on his Las Vegas contract.

The compensation going to Las Vegas is not yet clear.

Brown, 27, returns to coach Bill Belichick and the Patriots to reignite his career that reached its greatest heights in 2018 — his only season in New England.

After he was traded from the 49ers, he started every game for the Patriots, won a Super Bowl, and was good enough to earn a four-year, $66 million contract from the Raiders.

After a Pro Bowl season in 2019 as a right tackle, Brown had a more trying 2020. He played in just five games, spent some time on the reserve/COVID-19 list and most notably was hospitalized after a mishap with a pre-game IV that caused air to enter his bloodstream.

In his end-of-season news conference, Raiders general manager Mike Mayock said of Brown, “When he’s healthy, he’s dominant. And you’ve got to juxtapose that with his inability to play, week to week, over a two-year period. We’ve got to get a more consistent player. We think he’s the best right tackle in the league when healthy.”

That’s what the Patriots believe they are getting.