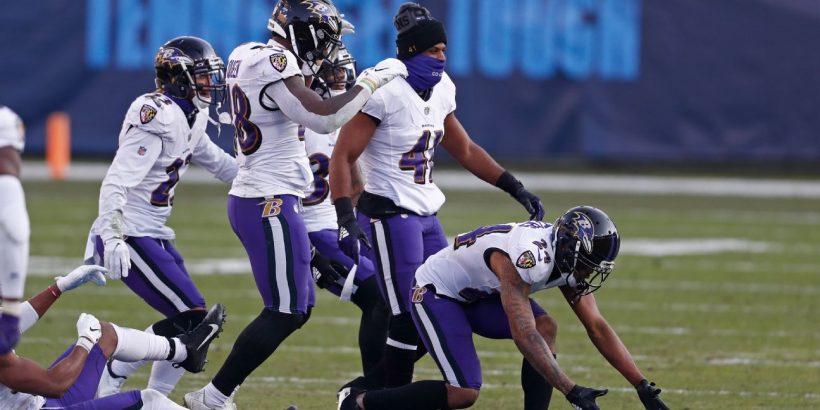 In the final two minutes of the Ravens’ 20-13 wild-card victory Sunday, 15 Ravens defenders followed Peters and stormed midfield where many stomped on the logo. This outburst came two months after the Titans players huddled on the Ravens’ logo before the teams’ last matchup, which led to a confrontation between Ravens coach John Harbaugh and their players.

“This is an emotional football game. Sometimes you act out of emotion,” Ravens defensive end Derek Wolfe said. “I felt like it was a good time to go ahead and do that — so we did it. It wasn’t a disrespect thing. It was a team unity thing like we accomplished something as a team, so we’re going to go out there and take a little bit of revenge. I don’t think it’s a big deal.”

Baltimore defensive end Calais Campbell, who flexed on the Titans’ logo, told NFL Network when asked about the gathering at midfield: “Respect is earned.”

Peters ended the Titans’ hope for a comeback with two minutes remaining, when he picked off Ryan Tannehill at the Ravens’ 40-yard line, returned the interception 13 yards and then bolted to the middle of the field. He leapt on the logo, dropped the ball there and shouted at the Titans sideline with his arms extended. Pro Bowl cornerback Marlon Humphrey sat on the logo and middle linebacker Patrick Queen waved at the Tennessee sideline.

The Ravens were penalized 15 yards for taunting but it had no impact on the game. Six plays later, Ravens quarterback Lamar Jackson knelt one final time and ran off the field without shaking hands with the Titans, waving his teammates to do the same.

“I feel it was just disrespect to see what went on before the game the last time we played those guys, and they were standing on our logo and seeing them get into it with our coach,” Jackson said. “That was just disrespectful, because we treat all of our opponents with respect. It wasn’t no reason for us to shake hands and stuff like that. We’ll be the bigger guy, so we just walked off the field. I feel like we were being the bigger guys.”

Tennessee offensive tackle Dennis Kelly doesn’t understand why the Ravens responded that way because he said the Titans have huddled at midfield before games the whole season.

“I don’t know what that whole disrespectful thing came from,” Kelly said. “If that’s what Harbaugh wanted to use to motivate them, I guess it worked.”

Titans coach Mike Vrabel declined to get into specifics over the Ravens’ midfield celebration and not shaking hands after the game.

“I coach the Titans, not the Ravens,” Vrabel said.

Peters wasn’t made available to reporters after the game, and Harbaugh wasn’t asked about his players’ celebration.

“We just like to celebrate; you know what I mean? It was a good celebration, I think,” Humphrey said. “Usually whoever makes the play, you run to that person; that person just so happened to end up being on the logo.”