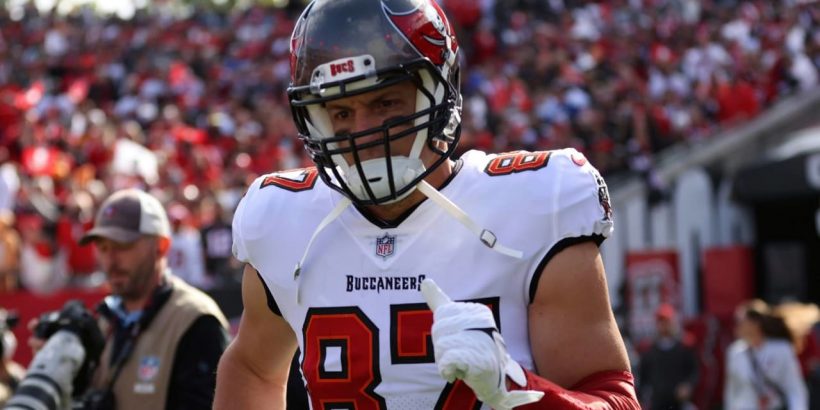 The 32-year-old told TMZ Sports that if forced to make a decision today, he’d walk away given how he feels after the 2021 season ended in the Divisional Round.

A free agent this offseason, Gronk clarified that most seasons he feels like he might walk away in the immediate aftermath of a campaign. It’s a reality that, for many players, the rigors of putting your body through an NFL season leave them worn and weary.

The tight end said his answer could be different in three, four or five weeks.

“If I had an answer right now, it would be no,” Gronk said. “But in three weeks, it might be yes.”

Gronkowski appeared in 12 regular-season games, netting 55 catches for 802 yards and six TDs — his most regular-season yards since 2017. In two postseason affairs, he corralled nine passes for 116 yards and one score. With injuries hindering the Bucs’ receiver position seemingly all season, Gronk played a vital role in keeping the passing game potent for the NFC South champs.

“I just want to heal completely, see where my thoughts are from there,” Gronk said. “Just let things settle down — got to just heal a little bit. Fix all the bumps and bruises.”

Alongside how he feels, Brady’s future likely also plays a role in Gronk’s decision. The tight end returned from his first retirement specifically to play with TB12. So it’s difficult to see the star TE continuing to battle if his BFF steps away.

But Gronk said he’ll make his own decision about whether to continue his career or retire.

“It will factor in in a situation,” Gronk said of Brady’s decision. “He’s gotta do what he’s gotta do for himself and his family, no doubt about that. But then for myself, I’ve gotta do what I’ve gotta do what’s best for myself. See where I’m feeling and all that type of stuff. So then, once I make that personal decision, we’ll see what his decision is, and we’ll take it from there. You can’t really read it or anything until it happens. But every situation could basically be on the plate, for sure. But I’ve got to do what’s best for myself first.”