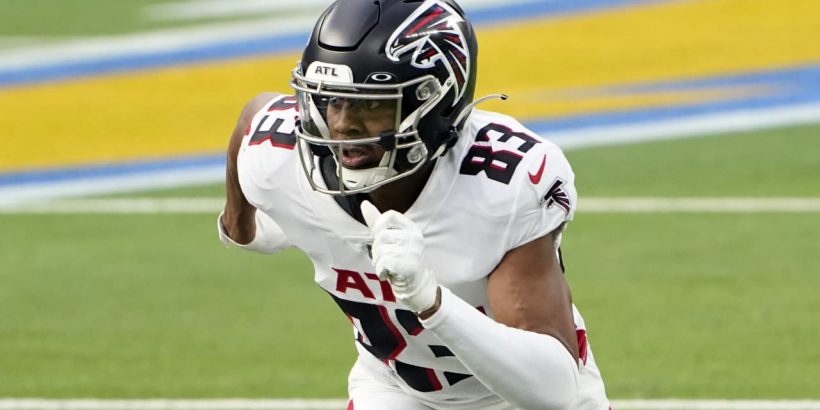 The Falcons’ trade of Julio Jones to Tennessee this offseason bumped the rest of the Atlanta receiver corps up the rankings. Calvin Ridley is now a true No. 1 target in Atlanta, and Russell Gage goes from third fiddle to the second chair.

Joining NFL Network’s Good Morning Football on Tuesday, Gage noted that the entire wideout room is deeper than most of the public believes.

“We have a lot of depth at the wide receiver position,” Gage said. “We’ve always had that. It isn’t just people like me or people like Calvin that you may know or already know about. We’ve got people like ﻿Olamide Zaccheaus﻿, Christian Blake. We’ve got depth all around the board. That duo could come from any combination of receivers. That’s one of the reasons why you shouldn’t sleep on us.”

More than any other player, the Jones trade thrusts Gage into the spotlight. Coming off a 72-catch, 786-yard, 4-TD season, the fourth-year pro goes from No. 3 wideout, who feasted off beneficial matchups as defensives focused on Jones and Ridley, to one of the primary players defenses try to slow.

Gage knows without Jones there is more on his plate entering a contract year.

“Moving forward, I always try to figure out what they want or what they want out of me, for one,” Gage said. “That’s the best way, I think, to gel and make the best successful team moving forward. Obviously, as I spoke earlier, (coach Arthur Smith) has high expectations for all of us. He’s told me he’s impressed with what I’m able to do and things I’m able to contribute to. Obvious, third down was a big role for me last year and that’s something that’s not going to change. With Julio gone, there’s gonna be some of that load that needs to be put on me. It’s not just me, it’s the whole receiving staff. … All of us are gonna have to help fill Julio because that’s such a big shoe to fill. But moving forward, I understand that my role and stuff may increase, but my preparation, like I said, is not gonna change.”

Gage played all three of his professional seasons with Jones after being drafted in the sixth round out of LSU. The 25-year-old credits his improvement to learning under Julio.

“It was kind of sad,” Gage said of when he heard about the trade. “I learned so much from him from when I first arrived in Atlanta. I think I’ve learned more from him than in a few years than I learned in my whole career. Julio is such a impacter, such a huge playmaker. He’s going to be a legend. Probably going to be a Hall of Famer. I couldn’t learn more from anybody. He’s a great person. I think he’s elevated everyone’s game, everyone around him, whether you’re offense or defense. You watch the separation, you watch the way he prepares for the game, just everything. I’m extremely grateful to have played alongside somebody like that. It’s something that’s going to always stick with me.”

The Falcons hope that those lessons Gage took from Jones translate on the field with a big 2021 campaign.