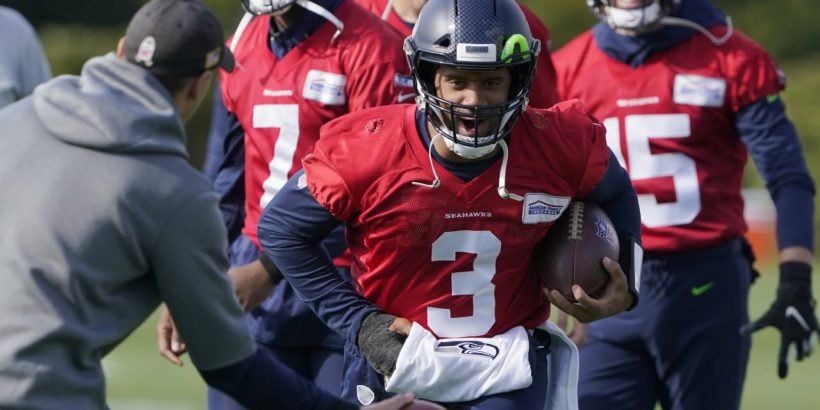 After Seattle Seahawks quarterback Russell Wilson injured his finger on Thursday against the Los Angeles Rams, ‘Hawks head coach Pete Carroll called his QB “one of the great healers of all time.”

The seven-time Pro Bowl quarterback was back at Seahawks practice Wednesday, though he was officially listed as a non-participant due to the injury to his right middle finger, which required surgery on Friday.

“He was great,” Carroll said, via the team website’s John Boyle. “He knows his job is to help Geno [Smith] and get him ready. …If he can figure out a way how to compete at that, he’s doing it. He’s already starting to listen to the game plan, he’s figuring out where it fits, he’s going to prepare just like he’s playing. His plan is to stay as sharp and as fresh as he possibly can.”

Wilson is reportedly zeroing in on a Week 10 (Nov. 14 at the Packers) return and it’s hard to argue that’s not realistic considering he had a helmet and red jersey on and was leading quarterbacks through conditioning drills on Wednesday, according to local beat writers. Wilson’s right hand had a sizable bandage and was often tucked in a hand warmer.

Wilson has yet to be placed on injured reserve, which would require him to miss a minimum of three games, and Carroll didn’t clarify if a move to IR is forthcoming.

“We don’t have to do that yet,” Carroll said, via the team website. “And so we’re figuring it out. We’re going to use all of the days that we need to make a really good choice here.”

Seattle has until Saturday to place Wilson on IR for the Steelers’ game to count as one of the three games he’s mandated to miss.

Geno Smith is set to start on Sunday night against the Steelers.

The Seahawks have quarterback Jake Luton on their practice squad and added QB Danny Etling to the practice squad on Wednesday, as well. Placing Wilson on IR would open up a roster spot, perhaps for Luton to back up Smith.

If Wilson’s not placed on IR by this weekend, conventional wisdom would lead to him not heading there as it would guarantee him not returning by Week 10.

For now, perhaps Wilson’s just lending his leadership to the squad for as long as possible.

Nonetheless, Wilson was back with his teammates Wednesday and taking some steps forward on the road to recovery.

“Russ had a very successful surgery, we’re really happy with all the reports, and we don’t have any timelines for you at all right now,” Carroll said. “He’s in really good spirits, really active today as much as he could be around us and all of that. Really happy for the results of the initial part of it.”