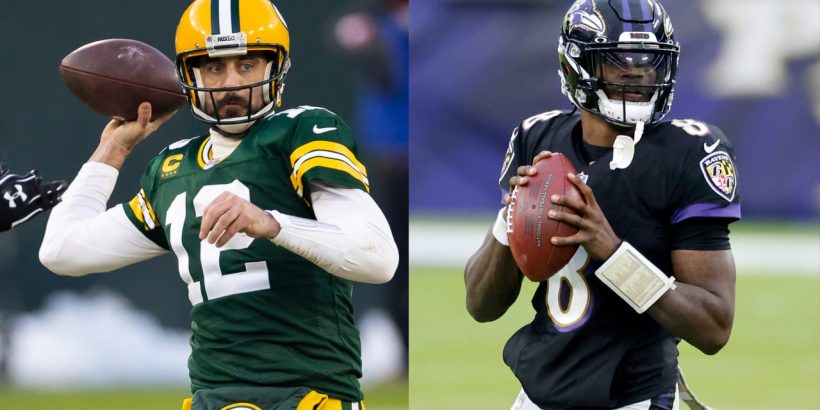 The 2021 NFL regular-season schedule is out — and the NFL Research Department is looking beyond the matchups and dates and diving deep into the weirdness that inevitably results from arranging 272 games between 32 teams across thousands of miles and multiple time zones.

Below are 13 scheduling quirks and oddities to watch out for as the 2021 season rolls along.

For more information on game tickets for the 2021 NFL season, click here.

2) All 32 teams will be showcased in at least one prime-time game in 2021, marking just the second time in the last five seasons that everyone gets a turn under the lights (the other year that happened in that span: 2018).

5) Presuming Aaron Rodgers stays with the Packers, he and Ravens QB Lamar Jackson will meet head-to-head for the first time in Week 15. This marks the eighth instance of the previous two NFL MVPs (Rodgers won in 2020; Jackson in 2019) facing off during the regular season since 2010.

6) The Jaguars face the Jets in Week 16, meaning there is a possibility we’ll see the No. 1 overall pick in the 2021 NFL Draft (Jacksonville’s Trevor Lawrence) square off against the No. 2 overall pick (New York’s Zach Wilson). If both quarterbacks start, it would be the fourth game in NFL history between rookie starting QBs selected first and second overall (the others: Jameis Winston vs. Marcus Mariota in 2015, Peyton Manning vs. Ryan Leaf in 1998 and Drew Bledsoe vs. Rick Mirer in 1993).

7) Trevor Lawrence will face Joe Burrow (when Jacksonville takes on the Bengals in Week 4) and Tua Tagovailoa (when the Jags face the Dolphins in Week 6 in London), which will be rematches of the College Football Playoff National Championships from the 2018 (Lawrence and Clemson vs. Tagovailoa and Alabama) and 2019 (Lawrence and Clemson vs. Burrow and LSU) seasons. The meetings will also mark the fifth and sixth instances of QBs starting against each other in the BCS/CFP National Championship, then again in the NFL, with the last instance being Vince Young vs. Matt Leinart.

8) The Panthers (at New Orleans, at Tampa Bay) and Chiefs (at Cincinnati, at Denver) are the only teams in the NFL to finish the 2021 season with back-to-back road games. The Chiefs were the only undefeated team on the road last season (8-0), while the Panthers went 3-5 (tied for the ninth-worst road record in the NFL).

9) The Colts have the toughest first eight games of the season, based on their opponents’ 2020 win percentage (.586); however, their final nine games are the easiest in the NFL (featuring a combined opponent winning percentage of .382). The Colts’ first five games will all be against teams that had at least 10 wins in 2020 (Seattle, Los Angeles Rams, Tennessee, Miami, Baltimore), but their finish includes two games against the Jaguars (in Weeks 10 and 18), plus clashes with the Jets (Week 9) and Texans (Week 13) in their final nine contests.

10) There will be 15 Super Bowl rematches in the 2021 season, including Super Bowl I (Packers at Chiefs in Week 9). The most recent Super Bowl matchup that will be rekindled is Patriots-Falcons (Week 11, when New England visits Atlanta on Thursday Night Football) from Super Bowl LI.

11) Based on 2020 opponent winning percentage (.635), the Ravens have the toughest second half of any NFL team this season. Seven of their final nine games are against 2020 playoff teams: Baltimore faces the Browns twice, the Steelers twice and the Bears, Packers and Rams.