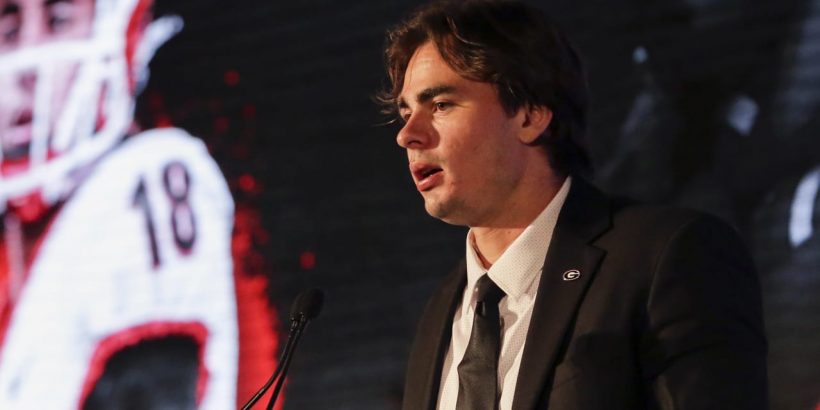 HOOVER, Ala. — The newfound revenue opportunities for college athletes through name, image and likeness laws open a door for agents, who can now build relationships with NFL draft prospects far sooner and like never before. But according to one of the top returning quarterbacks in the college game, 2021 might be a little too soon for the agent-prospect bond to change much.

NIL laws permit college athletes, for the first time, to profit from product endorsements, autograph sessions, promotional appearances and more. The laws are currently in effect in 15 states, including Alabama, Georgia and Mississippi. On June 30, the day before the first state NIL laws took effect, the NCAA adopted an interim policy allowing athletes in all 50 states to profit from NIL. Agents will be permitted to broker NIL deals, giving them a chance to represent players beginning as early as their freshman year in college. However, that’s not the reality for Georgia QB J.T. Daniels, who enters his fourth year of college this fall.

“I think for me and really a lot of guys that I’ve talked to, being that it came out July 1, it makes it pretty difficult to (build a relationship with an agent),” Daniels said at SEC Media Days on Tuesday. “Like for me, season mode kicks in June 1, when you come back from your May break because that May break is the only time you have off for the rest of the year. I won’t leave Athens unless it’s an away game really until after the season.”

“It’s definitely a separate decision for me,” Corral said. “But there are a lot of people who will try to take it in that direction, for sure.”

The newness of the NIL era creates some trepidation among players, as well.

“I haven’t touched it,” said Georgia’s Jordan Davis, a senior who is ranked the No. 2 interior defensive lineman in the 2022 draft class by Pro Football Focus. “I’m confused by it, honestly. It’s a lot.”

It’s a much different story for younger college stars, and even those who are merely expected to become stars.

Alabama QB Bryce Young, a highly recruited sophomore who has yet to start a game for the Crimson Tide, has already procured almost $1 million in NIL profit, according to Alabama head coach Nick Saban. That’s the kind of money that could compel a top college player who isn’t projected to be a top draft choice to remain in college rather than enter the draft as an underclassman.

NIL opportunities are bringing the business side of the sport to college athletes before they reach the NFL, where a career is very much a business when it comes to contract negotiations and marketing deals. Georgia head coach Kirby Smart believes the advent of NIL can benefit players from that standpoint. But he cautioned that the elite players — those who are NFL-bound — must be choosy when it comes to establishing their brand value.

“Definitely, that experience can be valuable for them, but they probably are the ones that have to be the most careful with brand selection because, if your identity becomes the lowest on the totem pole just to get $200, $300, that’s not going to be real good branding when you get the opportunity to go to the NFL,” Smart said on Tuesday. “Those guys probably need it the least although they’re the most valuable, the face of the organization, the high draft pick, (so) they need to be the most selective because what you brand yourself with doesn’t change.”

Nobody can accuse Corral of underselling his value. While some players’ approach might be to take what they can get when they can get it, Corral is seeking the ceiling for his earning potential. He’s set a price of $10,000 per hour for an appearance fee.

“I’ve taken a different approach to it. You see everybody across the country trying to get what they can with any deal, any company, whatever it is,” Corral said. “I’m all about making the right deals, looking for long-term deals that not necessarily are going to hurt me in the long run because I don’t want to burn the bridges with companies that I haven’t even made relationships with.”

It could be a shrewd strategy for Corral, who is among the draft prospects generating the most buzz among NFL executives this summer, per NFL.com analyst Daniel Jeremiah. His wait for the right deals might be a short one, but that’s not a gamble many of his peers can afford to make.