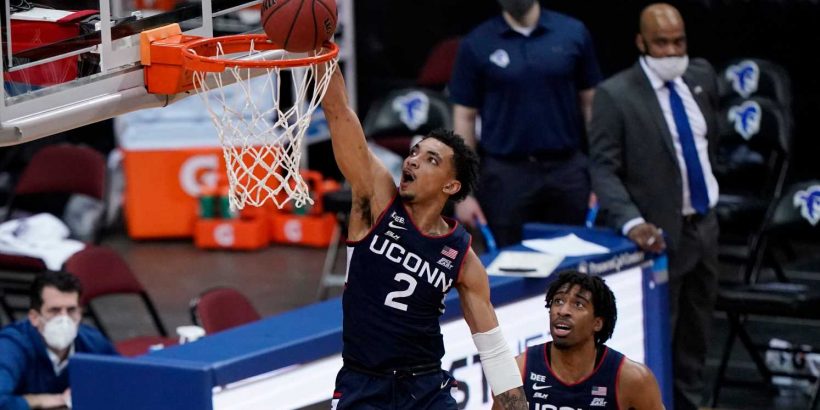 Think that team with a lower seed is a poor choice to advance in your NCAA Tournament bracket? You may want to rethink that strategy.

Peaking as the postseason nears is the goal for men's college basketball teams. As the calendar turns to March, that's undoubtedly true as conference tournaments begin and every result counts for seeding on Selection Sunday.

While the NCAA Tournament is largely about the matchups and seeding lines, the late-surging teams have been winning toward the end of the season for a reason. That momentum means they're hot and playing their best basketball when it counts. It also makes their seed deceiving.

Six teams that are sleepers to go far in March Madness based on their winning momentum and potential to far outplay their seed:

No. 7 seed: The Huskies (15-7) played themselves off the bubble and are just beginning to hit their stride. That’s largely due to the return of leading scorer James Bouknight (20.2 ppg), who missed eight games with an elbow injury. This team only lost twice in the regular season with Bouknight in the lineup and that’s what makes Connecticut so dangerous since its seeding would’ve been much higher if Bouknight didn't have to sit out. Coach Dan Hurley has revived this storied program in a short time, and a year in the Big East only bolstered the Huskies’ prowess. They hammered DePaul by 34 points in their return to the Big East tournament.

MEET THE 68 TEAMS:  In-depth look at every team in the field

CREATE YOUR POOL! Sign up, invite your friends and dominate your way to a title

No. 11 seed: The abrupt departure of longtime coach Gregg Marshall amid verbal and physical abuse allegations left the program in a state of disarray. But former assistant coach Isaac Brown, who was promoted and given a new contract, cultivated a winning culture. WSU captured a share of the regular-season American Athletic Conference title. Tyson Etienne (17.1 ppg) paces a balanced offense that sees six players average more than 7.0 points a game. The Shockers (16-5) do a lot of things well, but it all starts on defense — where Wichita State ranks in the top 25 nationally in field goal percentage defense.

No. 4 seed: The Cowboys (20-8) proved just how good they are as a whole, beating West Virginia in the Big 12 regular-season finale without national player-of-the-year candidate Cade Cunningham. Avery Anderson III, just a sophomore, scored a career-high 31 points. Cunningham (19.7 ppg, 6.3 rpg, 3.6 apg), the 6-8 guard expected to be the No. 1 pick in the NBA draft, is as clutch as he is explosive. He scored 40 points in an overtime win over Oklahoma on Feb. 27 and hit several game-winning jumpers throughout 2020-21.

No. 6 seed: The Trojans (22-7) won the Pac-12 regular season and coach Andy Enfield has one of his strongest teams since he took over in 2013. Freshman 7-footer Evan Mobley (16.4 ppg, 8.6 rpg, 2.9 bpg) is a dynamic big man who gives this team a chance to win against just about any opponent, while senior guard Tahj Eaddy brings veteran consistency and leadership. Mobley had 26 points, nine rebounds and five blocks in a Pac-12 Tournament quarterfinal win over Utah.

No. 9 seed:  The Yellow Jackets (17-8) won their last six regular-season games in ACC play, then upset Florida State for the tournament title. Their team identity is shaped around ACC player of the year Moses Wright (17.4 ppg, 8.0 rpg). The 6-9 forward scored 60 points combined in back-to-back wins over Duke and Syracuse to close out the ACC regular season. Coach Josh Pastner has a pesky defensive team that ranks in the top 10 nationally in steals and turnover margin.

No. 4 seed: The Boilermakers(18-9) came on strong, winning their last five regular-season games and beating Ohio State twice before falling to the Buckeyes in the Big Ten tournament quarterfinals. While much of the focus will be on other Big Ten teams because of such a strong year for the league, Purdue could be the dark-horse squad that goes far in the NCAA Tournament. Coach Matt Painter always has his teams leading with defense, and this group is no different. Trevion Williams (15.2 ppg, 8.8 rpg) helps the Boilermakers rank in the top 30 nationally in rebounding, and Purdue can be a team that advances to the second weekend by winning 50-50 balls and doing the little things.

NEED MORE BRACKET HELP? WE GOT YOU: