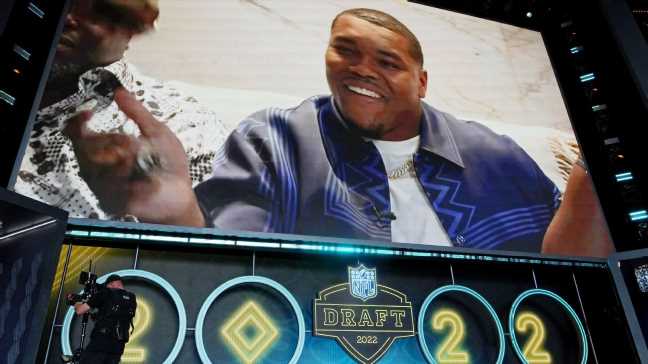 JACKSONVILLE, Fla. — The Jaguars and defensive end Travon Walker have agreed to a contract just two weeks after the team selected him with the first overall pick in the NFL draft.

The sides had agreed to a fully guaranteed four-year contract worth a little more than $37 million, a source told ESPN’s Adam Schefter. A league source said Walker is expected to sign the deal later on Thursday.

Because of the rules in the league’s collective bargaining agreement, there is little drama over rookie contract negotiations other than offset language. That is a clause that saves teams money if a player is cut before finishing their rookie contract. Walker’s contract does not include offset language since it is fully guaranteed.

Salaries are slotted based on where players were picked.

Walker played his best football of the 2021 season during the College Football Playoff. He had 10 of his 29 pressures in the two games, including a season-high seven in Georgia’s title-game victory over Alabama. He had sacks in each game, giving him a career-high six in 2021, after having only 3.5 sacks in his two previous seasons combined.

Walker played the majority of his snaps at defensive end last season and was a key part of the Bulldogs’ rush defense, which ranked second in FBS with 2.6 yards allowed per rush. He also played defensive tackle and outside linebacker, and the Jaguars plan to use him in the same way under defensive coordinator Mike Caldwell, though general manager Trent Baalke said the Jaguars will start him off as a stand-up pass rusher until he gets comfortable.

The 6-foot-5, 272-pound Walker turned heads at the scouting combine with a 4.51-second 40-yard dash, which was the fastest among all front-seven players. He also posted a 35½-inch vertical leap and a 10-foot, 3-inch broad jump — numbers that helped him shoot up teams’ draft boards.