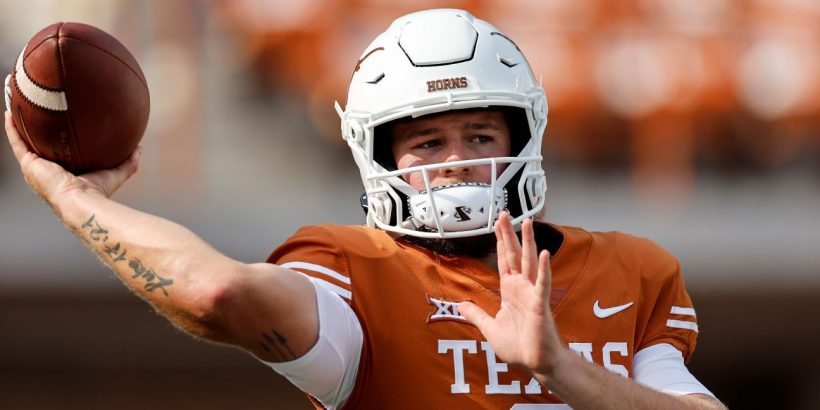 Texas quarterback Quinn Ewers, who has missed the last month with a significant injury in his non-throwing shoulder, will make his return to the field against rival Oklahoma on Saturday, sources told ESPN on Thursday.

He’s expected to start against the Sooners in the Red River Rivalry on Saturday in Dallas (noon ET, ABC).

Ewers has been dressing for Texas’ games since his injury on Sept. 10, but this is the first game that he’s been healthy enough to play. Ewers has been a full participant in practice all week with no limitations, sources told ESPN.

His return aligns with the initial expected four-to-six-week timeline after suffering a significant SC sprain — where the sternum meets the clavicle — against Alabama on Sept. 10.

Ewers’ return provides another daunting offensive weapon for Texas against a struggling Oklahoma defense. He will play alongside Texas tailback Bijan Robinson — the consensus top NFL draft prospect at the position by ESPN — and sophomore Xavier Worthy, who has continued to emerge as one of the country’s most dangerous wide receivers.

Ewers will be facing an Oklahoma defense that got eviscerated by TCU last week and is No. 109 in total defense. The Sooners yielded 668 yards to TCU, which scored 41 first-half points in a 55-24 blowout. Oklahoma ranks No. 119 nationally in rushing defense.

Ewers will return to the field for the first time since he flashed a glimpse of the talent that made him the No. 1 quarterback recruit in the Class of 2022 and one of the highest-regarded quarterbacks in the history of the state of Texas.

Ewers started and played well in Texas’ opener against Louisiana-Monroe, throwing a pair of touchdowns in a drama-free victory by the Longhorns.