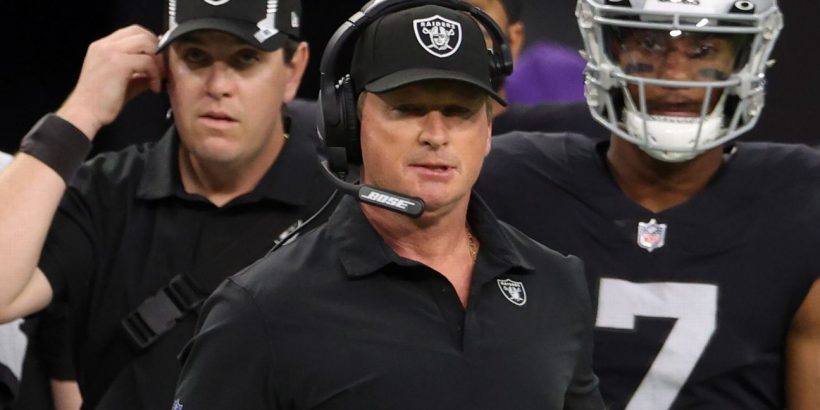 The NFL sent the Las Vegas Raiders additional Jon Gruden emails to review, on top of the one that surfaced last week and others Gruden recently confirmed to ESPN, sources told ESPN’s Adam Schefter on Monday.

The NFL is actively monitoring the situation and waiting to see how the team will handle the matter, sources around the league said.

The Wall Street Journal reported Friday that one of Gruden’s emails from 2011 — which came to light during the NFL’s investigation of workplace misconduct with the Washington Football Team — included a racist comment in reference to NFL Players Association executive director DeMaurice Smith. Gruden, who was employed by ESPN at the time as the lead analyst for Monday Night Football, said Friday that he is “ashamed I insulted De Smith” and added that he “never had a racial thought” when he sent the email.

In a series of tweets Monday evening, Smith acknowledged Gruden had reached out to him and that he told the coach “we will connect soon.”

“But make no mistake,” Smith wrote, “the news is not about what is said in our private conversation, but what else is said by people who never thought they would be exposed and how they are going to be held to account.”

Smith said that Gruden’s email, and some of the reaction to it, “confirms that the fight against racism, racist tropes and intolerance is not over. This is not about an email as much as it is about a pervasive belief by some that people who look like me can be treated as less.”

Gruden, when speaking to ESPN’s Chris Mortensen over the weekend, estimated he was aware of five to seven emails that were flagged by the league, including one in which he disparaged NFL commissioner Roger Goodell with a vulgar description, and others that included harsh words for a handful of team owners who were involved in the 2011 labor disagreement that led to a lockout.

Gruden told reporters Sunday he had not had any contact with the NFL about the emails. He and his players spoke about them Sunday in the wake of the Raiders’ 20-9 loss to the Bears at Allegiant Stadium, Las Vegas’ second straight lackluster defeat after opening 3-0.

During his weekly media availability on Monday, Gruden was asked what he has learned since the Wall Street Journal story broke on Friday

“I’ve learned a lot and again I’m not going to rehash the event again,” Gruden said. “I think I feel very good about the things I have learned. I also feel really good about what I stand for, as I said yesterday, and I’ll be happy to talk about football, but I’ll just leave it at that.”

Raiders owner Mark Davis, meanwhile, has stood by the statement he released on Friday afternoon, calling the content of Gruden’s email to Smith “disturbing” and “not what the Raiders stand for.”