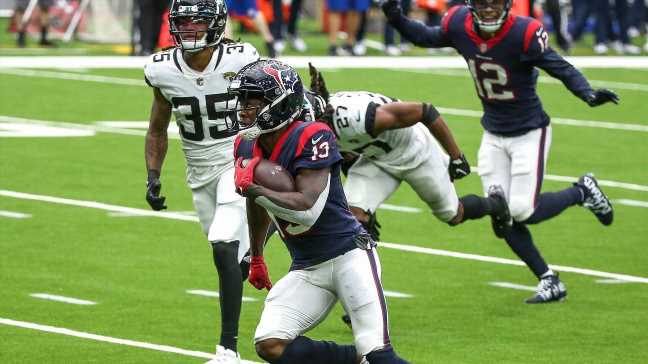 HOUSTON — Texans wide receiver Brandin Cooks, who is playing for his fourth team in his first seven NFL seasons, said he’s “not going to accept any more trades.”

Cooks, who has been traded three times in his career, has three years left on the contract he signed with the Los Angeles Rams. He has a cap hit of $12 million in 2021 but does not have any guaranteed money left on the remaining three years of his deal.

“For me, [No.] 4 [Deshaun Watson] is a special player and I would love to continue to grow with him,” Cooks said. “But as far as a team thinking they could trade me for draft capital, I would caution them to think twice, because quite frankly, I’m not going to accept any more trades. And so, for me, if you want me off your team, you’ve just got to let me walk and choose my destination.

“For me, I’ve got a newborn son at home and he’s looking for someone to set an example. So I think it’s, for me, starting to stand firm when it comes to my career, but when it comes to playing here and playing with Deshaun, I would love to continue that growth. But that’s out of my hands. Those are decisions that I don’t make. I hope that the team sees the growth that we’ve been having and continues to show that commitment and growth over the years.”

In three games since wide receiver Will Fuller was suspended for the remainder of the season (Cooks missed one game with a neck injury), Cooks has 25 catches for 265 yards and a touchdown. With 16 yards in Sunday’s season finale against the Tennessee Titans, Cooks would become just the second receiver in NFL history to have at least 1,000 receiving yards in a season with four different teams, according to ESPN Stats & Information.

After being traded from the Los Angeles Rams for a second-round pick in April, Cooks has 70 catches for 984 yards and four touchdowns in his first season in Houston.

Cooks declined to say how he would block a trade, and when asked about whether he’d be interested in signing an extension that would give him guaranteed money, he said, “that’s something my agent handles.”

“I would love to continue to grow with Deshaun and have that commitment, however that looks,” Cooks said. “I don’t get into that. I’ll leave that to my agent and the team, but playing with a guy like that — who wouldn’t want to play with a quarterback like Deshaun?”

The Texans currently have four wide receivers under contract for 2021: Cooks, 2020 fifth-round pick Isaiah Coulter and slot receivers Randall Cobb and Keke Coutee. Fuller was playing on his fifth-year option before he was suspended in November. Houston does not have a first- or second-round draft pick after sending them to Miami in 2019 for left tackle Laremy Tunsil and wide receiver Kenny Stills.

“I feel great about playing in this offense,” Cooks said. “I think there’s so much more room to keep continuing to grow together. Not just me, but just all of us as a whole. You think about not having the offseason, not having time to really jell. We didn’t have that opportunity as a team, especially the new guys. And hopefully we get to have that opportunity and I think there’s so much room to grow, in a great way.”