The 2020 season continues to heat up with a Week 6 slate containing four games between ranked teams, including a prime-time ACC matchup pitting No. 1 Clemson and No. 7 Miami.

It's another big weekend in the SEC. No. 2 Alabama and Nick Saban take on former assistant Lane Kiffin and the explosive Ole Miss offense. After last week's flop against the Crimson Tide, No. 20 Texas A&M aims to rebound against No. 3 Florida.

Florida's co-No. 3, Georgia, takes on No. 12 Tennessee in a barometer of the Volunteers' growth under coach Jeremy Pruitt. Is the Volunteers' winning streak a sign of a program that has turned the corner?

One rivalry has lost its luster. Over in the Big 12, Oklahoma (1-2) meets No. 22 Texas in the rare Red River Shootout with only a wisp of national importance. The quarterback battle pits redshirt freshman Spencer Rattler against senior Sam Ehlinger.

Five questions will decide how Week 6 plays out:

A Miami win at Clemson would mean …

Let's unpack how Miami winning in Death Valley would upend the playoff race and rewrite the ACC power rankings. For one, the Hurricanes would vault to the top of the conference and force Clemson into the rare position of playing catch up the rest of the regular season. Two, it would be a win for the Big Ten and Pac-12, which could envision an easier path to the top four with the Tigers on the outside of the conversation. Three, it would make Alabama the clear No. 1 in the Amway Coaches Poll and paint the Tide as the favorites to win the national title. Is a Miami win possible? Get another great game from D'Eriq King, force Trevor Lawrence into a rare turnover or two and win the battle for field position, and … maybe. It may be too soon for Miami to take this step.

BOWL PROJECTIONS: Florida remains ahead of Georgia in playoff race

Is Tennessee all the way back?

The Volunteers reestablished themselves in the national conversation with six wins to end last season. With impressive performances in the past two weeks, they're just outside the top 10 heading to Saturday's showdown at Georgia. The opportunity is there to take that next step and become contenders in the SEC East. Jeremy Pruitt has been building for this moment with his success on the recruiting trail. But none of the victories on the team's eight-game win streak have come against the SEC elite. This will be a huge step up for the program, should it win. The key will be if the Tennessee offensive line is physical enough to deal with the Bulldogs defense that shut down Auburn. 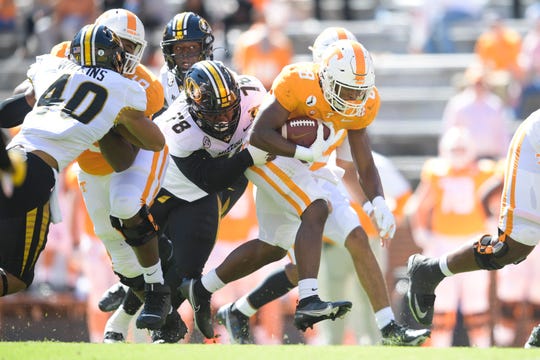 Can Ole Miss score on Alabama?

The offense has scored 35 points (against Florida) and 42 points (against Kentucky) in Kiffin's first two games. As expected, Kiffin's ability to frame his scheme to fit his personnel has made the Rebels dangerous. With its ability to alter tempo and run out of a variety of formations, the Ole Miss offense will provide a much more difficult matchup for Alabama and Saban's defense than Texas A&M, which is more vanilla in comparison. (And we know how that turned out for the Aggies.) While an upset seems unlikely, the Rebels are capable of straining a defense that has kept Missouri and A&M under wraps.

What should we make of the Red River Rivalry?

The annual Oklahoma-Texas showdown takes a backseat to no college football rivalry game because it combines fierce animosity with two of the sport's traditional powers. The animosity remains the same this year. The usual playoff implications do not. Oklahoma is unranked heading to Dallas for the first time since 2005, the only year this century OU has been out of the Top 25 for this game. Texas is No. 22 and looks nothing like a contender. Yet, there still is much to play for. Bragging rights and the impact on recruiting battles are significant.  At 1-2, the Sooners are facing a must win to extend their streak of five consecutive Big 12 titles. A win against their biggest rival would give the Longhorns a needed push to the top of the conference and take some heat off coach Tom Herman. The emotions will still be high. Hopefully, the game matches the level of effort.

What shot does Florida State have at Notre Dame?

Not much of one. The No. 5 Fighting Irish are deeper, more experienced and substantially better at two key positions where FSU continues to struggle: quarterback and the offensive line. The Seminoles might have the element of surprise in new quarterback Jordan Travis, who played well enough after being called on against Jacksonville State to earn the starting nod. The lack of film on Travis might play to FSU's advantage, if only temporarily. A Notre Dame win seems certain enough to wonder how bad it could get. Could it get into the territory of FSU's 52-10 loss to Miami? The Seminoles need to show progress.