Oakland Raiders general manager Mike Mayock has told disgruntled receiver Antonio Brown it is time to decide whether he is “all in or all out” about playing this season after losing a fight with the NFL and NFLPA over his helmet.

Mayock issued a statement to reporters the Raiders released in a video on Twitter expressing his frustration Brown did not participate in practice Sunday despite being healed from the frost-bitten feet that have sidelined him for most of training camp.

“You all know that A.B. is not here today. So here’s the bottom line. He’s upset about the helmet issue. We have supported that. We appreciate that,” Mayock said.

“But at this point, we’ve pretty much exhausted all avenues of relief. So from our perspective, it’s time for him to be all in or all out. So we’re hoping he’s back soon.

“We’ve got 89 guys busting their tails. We are really excited about where this franchise is going and we hope A.B. is going to be a big part of it starting Week 1 against Denver. End of story. No questions.”

Brown has been upset the NFL and NFLPA will not allow him to use the same Schutt Air Advantage he has used throughout his career. Brown filed a grievance over the issue he lost on Aug. 12 and then set out to find a newer version of the helmet that was less than 10 years old to get approved. 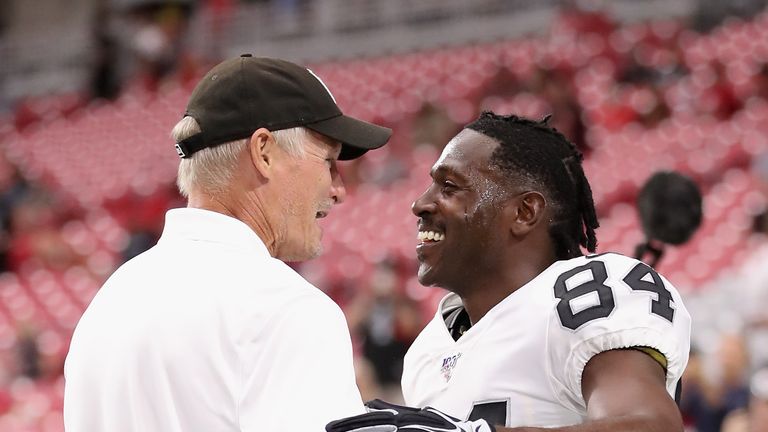 Brown’s agent, Drew Rosenhaus, said last week after Brown returned to the Raiders training camp facility they had found several helmets and were waiting formal approval. Brown took part in pre-game warmups before an exhibition game in Arizona on Thursday night and took part in a walkthrough on Saturday, prompting coach Jon Gruden to express confidence that he would soon be able to practice.