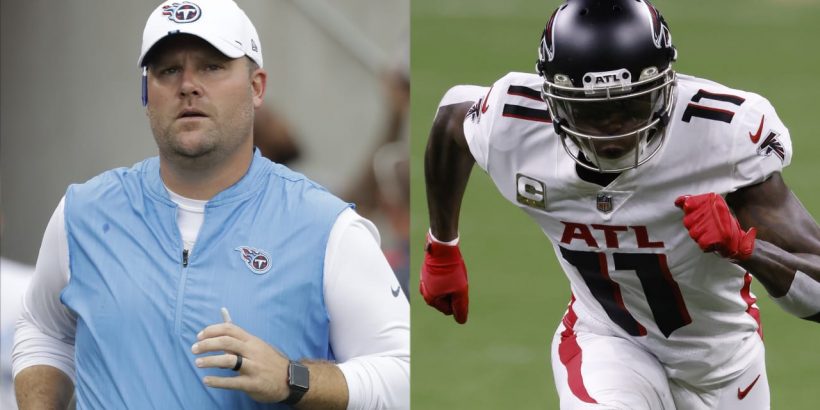 Joining NFL Network’s Good Morning Football on Wednesday, Robinson said the addition of Jones is a perfect match in the Titans offense.

“My charge is to get as many good players on the team as possible and I’m excited about the guys we had back on the roster, the guys that we added in the offseason, but when you’re able to acquire a player like Julio and can add him into the mix of our football team, what we try to do offensively, those don’t come around very often,” he said. “We thought it was a move that we needed to make for us. I know our fans are super stoked to have him here.”

The Titans gave up a second-round pick in 2022 and a pick swap (four to six) in 2023 to land Jones. The lower cost comes partly due to Jones’ recent injury history and the $15.3 million owed this season, which Tennessee took on wholly. There is also the possibility that Jones could want a reworked contract if he gets back to his Pro Bowl form in 2021.

The risk is worth it for Robinson to shoot for the moon in an AFC South race up for grabs.

With major questions still on defense, the Titans GM did the best thing he could do for his club: Add more offensive firepower. After seeing Corey Davis and Jonnu Smith leave in free agency, the Jones trade fills the gap and then some.

The ability to stack Jones and Brown on the outside will be a nightmare for defenses deciding where to pile resources. If they drop defenders deep to defend the star receiver duo, Derrick Henry will eat their light box alive. Ryan Tannehill should see a lot of advantageous situations when he approaches the line of scrimmage in 2021.

“To have both of those guys (Jones and Brown), with (tight end) Anthony Firkser﻿, with Josh Reynolds﻿, with Derrick in the backfield, obviously with Ryan, we’re just excited about how they’re all going to complement each other, the stresses they can put on defenses and make defensive coordinators’ job harder to try to game plan of those guys,” Robinson said. “I’m excited that both of those guys, as well as Josh Reynolds and Firkser and (tight end) Geoff Swaim and Derrick, are on the team, and hopefully, we can continue the trend of what we’re trying to do offensively.”

The addition of Jones shouldn’t be understated for a Titans team that previously looked like it was poised to take a step back. Robinson’s bold move thrust Tennessee back into the discussion for top-tier squads in the AFC.