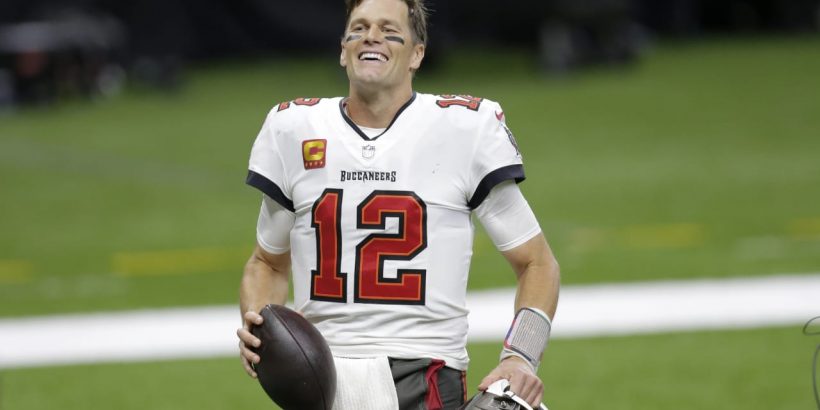 At the mouth of the New Orleans Saints’ tunnel Sunday night, ﻿Drew Brees﻿ blew some kisses into the air and began to make his way to the locker room. He paused for just a moment as he entered the tunnel, turning to glance back behind him, perhaps taking a last glimpse at the Superdome for his memories after another devastating postseason loss.

That is the fate — the slow, sad walk toward a possible retirement, the goal unfulfilled — that ﻿Tom Brady﻿ is still successfully fleeing. That Brady was at the opposite end of the Superdome field, gleefully embracing his business partner and trainer Alex Guerrero, on his way to his 14th conference championship game, was precisely why Brady had alighted on Tampa Bay while the very few NFL contemporaries he has left are on their way out. It was a marriage of convenience: The Bucs needed Brady to finally take a roster of young talent on a postseason run, Brady needed the Bucs to feel reinvigorated, to get another chance at a Super Bowl, to forestall for a few years — maybe forever — the melancholy ending that comes for all but the most fortunate players.

The Bucs’ 30-20 victory over the New Orleans Saints on Sunday was really much more about the Bucs’ defense stuffing the run, generating turnovers and taking advantage of Brees’ painfully obvious limitations. But the Bucs were here, with this chance, because they had gone all in this year with Brady, and then with the people they surrounded him with. That the game looked a lot like one from the New England Patriots’ last Super Bowl run — dominated by defense, with Brady producing few fireworks but also avoiding bad mistakes, content to move methodically with short passes — may not be from the “no risk it, no biscuit” playbook, but the Bucs wanted Brady mostly because he not only would throw a lot fewer interceptions than ﻿Jameis Winston﻿ would, but because he could also insist that everybody around him match his effort and single-minded focus on winning.

When Brady kept repeating Sunday night that it is hard to get to this point in the season, that nothing after this is guaranteed, it sounded like this week’s installment of life lessons he wants to impart to the younger players who had helped get him back in the championship race after that sullen, sorry ending in New England last year.

“Guys really come together,” Brady said. “We have great chemistry. We have fun at practice and we’ve worked really hard to get to this point, just like the other three teams remaining. It’s hard to get to this point — there’s nothing guaranteed from this point forward — but we’ve got to go out there and we’re going to have to play our very best to beat one of the best teams in the league.”

On the day Brady signed his contract with the Bucs 10 months ago, he told general manager Jason Licht precisely how many hours the Bucs had to prepare before their season opener. He demanded the phone numbers of his new teammates — immediately. And he noted to Licht that the Bucs share a division with Brees and Sean Payton, who were about to embark on their 14th season together, a presumed advantage considering Brady was starting over at perhaps the worst time in NFL history — in a year in which a pandemic would shut down offseason practices and preseason games. Even those unofficial workouts Brady organized at a local high school could not entirely make up for the 1,500 snaps that quarterback coach Clyde Christensen estimated the Bucs missed.

But what the divisional playoff game made apparent is that even if a conversation about his arm strength has been an amusing diversion throughout the season — as good as ever is what his coaches say, and what late-season statistics seem to back up — whatever age-related decline Brady may be experiencing is happening at a much slower rate than those around him, particularly when his team plays well around him.

In the Bucs’ two regular-season losses to the Saints, Brady was sacked six times and threw five interceptions, the second loss — a 35-point trouncing in early November — raising alarms because the assumption was that Brady should have been settling in by then. Really, it was a reminder that Brady needs some help. He needs protection from the offensive line. He needs a running game. He needs a defense to force turnovers, as they did Sunday. The Bucs’ three touchdowns came on short fields following Saints turnovers — two interceptions of Brees and a fumble by tight end ﻿Jared Cook﻿. It is the kind of complementary football that was exalted in New England and which, it turns out, plays well in Tampa Bay, too. If Brady can no longer carry a team entirely on his shoulders, he is also — as the Bucs calculated — unlikely to make so many mistakes that he would torpedo a season. ﻿Philip Rivers﻿, ﻿Ben Roethlisberger﻿ and now Brees have all gone into the offseason with delicate questions about whether their teams would be better off starting over. There is no such conversation in Tampa Bay, where they may be thinking that Brady’s two-year contract is too short.

As the season has played out, it became ever more obvious that Brady had emerged from his divorce from New England in better shape than the Patriots, at least for now. The Patriots missed the playoffs entirely and Brady, one year after what became nearly weekly agitation at the failures of the Patriots’ offense, has seemed renewed, even as Arians has sometimes issued often blunt, public assessments of his performance. After the game, the Brady who emerged was smiling again, throwing bouquets to teammates and coaches. We had not heard that much from him as his time wound down in New England.

“It feels great to beat a great football team, that’s what feels best,” Brady said. “It speaks to the commitment level.”

That, alas, is something he did not say very often in his final year in New England, either.

It has been 20 years since Brady took his first team to a conference championship and then, shockingly, onto their first Super Bowl championship. A Super Bowl title this year — in his first with a new team, requiring a victory at Lambeau Field over ﻿Aaron Rodgers﻿ — seems nearly as unlikely as the one the then-unknown sixth-round draft pick engineered after taking over for Drew Bledsoe.

But as Brady and Brees, dressed in street clothes, wrapped up a long post-game conversation with an embrace, Brees knelt on the field for pictures with his children after what was almost certainly his final game. His chase is over. Not for Brady, though. He left, to his new home, with his new team, racing, still, to a familiar spot in the postseason.