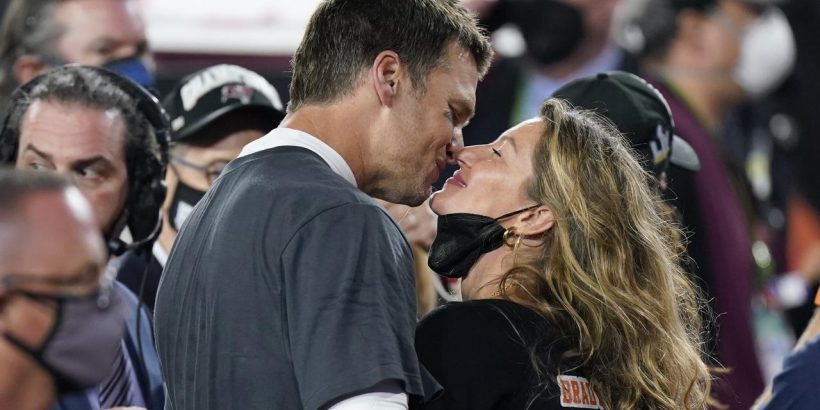 On Monday, the Buccaneers quarterback tweeted “#NewProfilePic” above a photo of himself sporting red laser eyes. The image sparked speculation that he’s joining the cryptocurrency world as an investor.

According to Cointelegraph — a news source covering blockchain technology, crypto assets and emerging fintech trends — “the laser eyes meme that initially swept across crypto social media in February 2021 saw crypto influencers, industry leaders and regular users change their Twitter profile pictures to include laser eyes. The fad was to signify support for Bitcoin’s price surging until it hit $100,000.”

After informing fans about his new cryptic profile picture, Brady kept the rumour mill churning when he replied to a tweet suggesting he’s working with bitcoin.

“Hmmmm should I change it??,” Brady tweeted, referencing his laser eyes image.

Brady’s mystery tweet did not include an official announcement.

Hmmmm should I change it?? https://t.co/w6VF35Ypgx

Brady has plenty of coin to gamble on the digital currency with reports of his staggering wealth emerging before his team’s Super Bowl win in February.

Celebrity Net Worth estimated that Brady has a net worth of $260 million, making approximately $182 million in endorsements between 2000 and 2021.

However, his wife, super model Gisele Bundchen, is estimated by Forbes to have a staggering fortune with a net worth of $521 million.

If Brady were to join the cryptocurrency craze, like athletes such as Kevin Durant, it would add to his impressive business resume — which already includes his science-based health and wellness TB12 brand, among other off-the-field ventures.

More recently, the reigning Super Bowl champion hopped on the NFT (non-fungible tokens) train, a new cryptocurrency obsession that includes pieces of digital content, such as art and collectibles, linked to the blockchain.

This spring, Brady is slated to launch an NFT platform, titled Autograph, that will include NFTs featuring the seven-time Super Bowl winner himself.

Autograph will unite some of the biggest names in sports, entertainment, fashion and pop culture to work with creators to develop unique digital collectibles, a representative for Brady told CNN Business in early April. The platform, in which Brady and entrepreneur Richard Rosenblatt will serve as co-chairs, is set to feature interactive experiences, including auctions, physical product drops and in-person ventures.