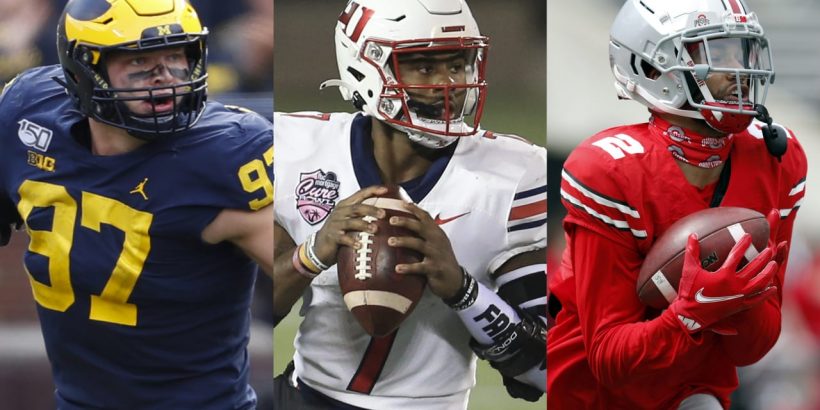 In August, Reese’s Senior Bowl executive director Jim Nagy and his experienced scouting staff released their watch list for next year’s game. The roll of over 500 prospects being evaluated for the annual college all-star classic in Mobile, Alabama, included players from nearly every level of college football, from Power Five schools to Division III Wisconsin-Whitewater.

I’m ranking the 25 top prospects for the 2022 Senior Bowl from that exhaustive inventory, along with a mention of five more players to watch as the season gets underway this weekend. Multiple players from Alabama, Auburn, Georgia Ohio State, Utah, Washington and FCS power North Dakota State are incorporated in my list.

The 2022 NFL Draft is nearly eight months away (April 28-30 in Las Vegas) so the evaluations of these players will change based on their play this fall, their results in athletic testing and, if they are fortunate enough to receive an invite, their performance at Senior Bowl week practices and the game itself (Feb. 5 on NFL Network).

NOTE: Prospects are listed in ascending order. Heights and weights are via school measurements.

Beal-Smith might be viewed as the best senior back in the class by the time the pre-draft evaluation process is complete. His compact build and thick legs give him power, but his open-field vision, nimbleness running through traffic and patience finding a hole give him a nice all-around skill set that teams will value on Day 3 of the draft.

Quindarious “Smoke” Monday earned his nickname from his grandfather when he was a youngster. “I used to just run around the house, so he started calling me ‘Smoke,'” Monday told 247Sports. He’s an effective blitzer and brings physicality to linemen and tight ends against the run. He has intercepted three passes over the past two years, returning two for scores — including one in the Tigers’ upset win over Alabama in the 2019 Iron Bowl.

Ford reminds me of Green Bay Packers starter and former Mississippi State Bulldog Elgton Jenkins. He’s started at all five offensive line positions over the past three years, using his strength to anchor against defensive tackles at center and guard and his length and agility to hold up well in three starts at tackle. His football IQ and mobility give him a shot to play center in the NFL, or he could be an excellent starter at guard for zone- or power-blocking schemes.

Watson looks and moves like he could be a sprinter or hurdler on the North Dakota State track squad, but don’t let that fool you. Sure, he runs by defenders with those strides on go routes and shows excellent short-area agility and speed on jet sweeps, but his intensity shows when getting after cornerbacks as a blocker.

Doubs (pronounced dubs) teamed with then-redshirt sophomore Carson Strong to form one of the top quarterback-receiver combinations in the country last season. He can get by corners in a flash off the line of scrimmage and also possesses size to win the jump ball and shield defenders on slants. Doubs’ agility in his routes and elusiveness after the catch for his size will catch the eyes of scouts.

As the Bearcats rose to a top-10 finish in 2020, Sanders’ name gained attention in scouting circles. The first-team All-American Athletic Conference selection topped the squad in tackles for loss (10.5) and sacks (7) using his length and agility on the edge. Sanders must hold his water better than he did against Georgia in the Peach Bowl (three offsides penalties) but the quickness he showed playing in both two- and three-point stances portend a nice future as an NFL pass rusher.

The former safety moved to linebacker for 2020, though he still led the team with two interceptions and tied for the team lead with seven pass breakups. Overshown has an angular frame but has added bulk; he explodes into blockers and lays the wood in the box. Overshown’s length and aggressive nature make him very effective as an open-field tackler on defense and special teams.

Volson started at right tackle in 2019 to bookend with 2021 second-round pick Dillon Radunz, who is fighting for playing time as a rookie with the Tennessee Titans. Volson moved to right guard during the Bisons’ 2021 spring season after starting twice at Radunz’s old left tackle spot because of injuries along the line, but he’s back at right tackle on the team’s depth chart for Week 1. His willingness to finish most every block, along with his versatility, could land him better grades than his former teammate.

Garrett made headlines last season, playing in all eight games for the Buckeyes despite suffering a gunshot wound to his face on Aug. 30, 2020. In his first year as a starter, he used strong hands and quick feet to beat interior linemen off the snap. His energy will help him as a three-technique or one-gap nose tackle at the next level.

Lloyd’s an active inside linebacker prospect who will take on blocks, work well in space and attack gaps on blitzes. The 2020 Butkus Award finalist flows to the ball in a hurry once it’s in his sights. Lloyd could play on the outside for an NFL team, as well, because of his athleticism and strong tackling in coverage.

In a league searching high and low for athletic tight ends, Otton will be highly coveted. His size, quickness and strong hands make him a mismatch for smaller defenders, whether over the middle or in the end zone. Otton’s a solid blocker, as well, shielding defenders whether lined up at H-back, in the slot or in-line, which gives him a chance to be an immediate three-down NFL player.

Barno played two seasons at Butler Community College before transferring to Tech, breaking out on the national scene in 2020 with 16 tackles for loss in 11 games. His chase speed might be the best in the class, and he’s no wallflower on the edge. Another year of strength training means he’ll be an even bigger problem for ACC tackles in 2021.

When there is a play that needs to be made on defense or special teams, Auburn counts on McCreary to make it. He’s a tough-minded corner who can play inside or outside because of his speed and short-area quickness. McCreary finds the ball in the air and has good hands to intercept the pass (four career INTs). He’s a solid tackler in space, bringing the intensity in pursuit of the ball-carrier.

Jobe has the prototypical size to handle outside receivers in press and is willing to fight for the ball through the catch. His strong tackling is not just evident when attacking quick screens or underneath routes, but also on special teams coverage units.

Kinnard is a mauler who brutalized defenders in the run game the past two seasons at right tackle. He can dominate defensive linemen of all sizes once engaged. Kinnard must prove he can win the hand battle and move his feet after contact against better rushers, or else teams might project him inside at the next level.

After making one of the best one-handed catches of the 2020 college football season against Ohio State, Jahan (pronounced juh-HAHN) Dotson told reporters he sees the football as “a million dollars in the air. You want it, you go get it.” Dotson is one of the quickest receivers in the country, so he can win on short, intermediate and deep routes. His punt return skills will be valued by NFL teams, as well.

Munford stuck for a fifth year with the Buckeyes after earning Big Ten honors the past three seasons at left tackle. The long-legged blocker works hard to keep his pad level down and move his feet quickly while still delivering a strong punch that halts oncoming edge rushers. Munford’s also a powerful run blocker that NFL running backs will love to follow. He could show his versatility in 2021, as he might open the season at left guard.

Anderson is one of the more interesting prospects in the draft class because he is expected to play somewhere around three times as many snaps as a senior as he had in previous years. He’s been an excellent pass rusher for the Bulldogs, using his height and flexibility to win the edge against SEC tackles while also dropping into coverage. Anderson hasn’t shied from contact against those massive tackles when playing the run. His stock will skyrocket if he consistently plays with physicality despite his lean frame.

Enagbere (pronounced ee-NAG-bar-ee) nagged SEC quarterbacks enough (six sacks in eight games) to earn first-team all-conference accolades as a junior. He could play standing up or in a three-point stance at the next level, as he does for the Gamecocks. Enagbare converts speed to power for a bull rush, turns the corner on the outside and chases down ball-carriers on a regular basis. He’s also effective as a stack-and-shed player against the run on the edge.

When Davis is fresh and plays with a good pad level, he’s a tough ask for college interior offensive linemen. He maintains the line of scrimmage on run downs and can get an upfield push when quarterbacks drop back, squeezing the pocket so the edge rushers can get home. Davis is willing to move down the line to chase, as well, which is a frightening sight for most ball-carriers.

Don’t let Allen’s four starts in 13 appearances for the national champions last season fool you: he’s no backup. The second-team All-SEC pick’s strength and flexibility make him an effective pass rusher (led the conference in 2020 with 13 tackles for loss, including six sacks), but he also moves well in space to handle zone coverage responsibilities. Allen works out of a two- or three-point stance, making him a nice fit for teams using multiple fronts.

Kirkland got his first taste of left tackle last year after starting at right guard the previous two seasons. The way he dropped his hips and moved his feet in pass protection was a delight to watch. Kirkland’s work at guard also helped him become adept at hitting second-level targets in the run game. He’ll be a solid pro for years to come.

Hutchinson is entering his fourth year with the Wolverines but missed all but three games of last season with a fractured right leg. His combination of size, strength, agility and a constantly running motor should make him highly valued in NFL circles, as long as he can stay healthy. Michigan coaches will again line up their star all along the front to take advantage of mismatches (and keep offenses from keying on him). Hutchinson could play 4-3 base power end or at five-technique in the NFL.

It is fitting that Olave rhymes with the Spanish word “suave,” for which one definition is smooth. Whether he clocks an elite 40-yard dash time is immaterial. He is a smooth mover who presents the body control and late separation to win on the sideline. Olave is quick and slippery after the catch, as well, making him a likely No. 1 receiver at the next level.

Willis looks to be the next transfer quarterback picked early in the draft, following in the footsteps of Cam Newton, Baker Mayfield, Kyler Murray, Joe Burrow and Justin Fields. After sitting for two years behind Jarrett Stidham and losing the 2019 preseason competition to then-freshman Bo Nix, Willis moved from Auburn to Liberty and proved himself a worthy starter in 2020 by leading the Flames to a 9-1 record. Willis has a whip of an arm, displaying pro velocity to all parts of the field, as well as good touch when needed and excellent speed and elusiveness as a runner. He’s a true playmaker with the potential to be a star at the next level as his consistency from the pocket improves.