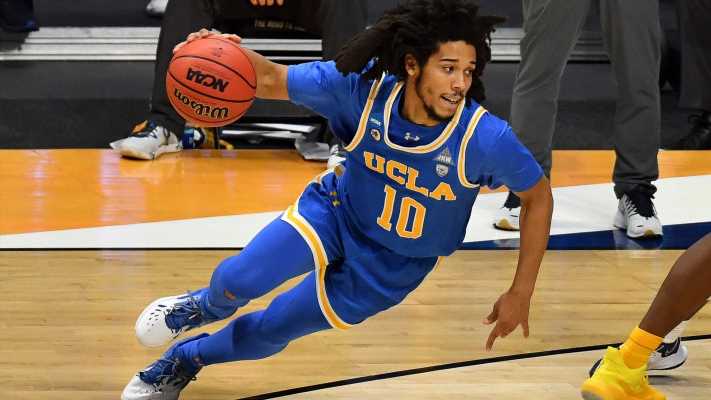 INDIANAPOLIS — Since the UCLA Bruins are at the men's NCAA Tournament, they might as well stick around for a while.

After skidding into the First Four on a four-game losing streak, UCLA is in the second round after a 73-62 upset of sixth-seeded BYU on Saturday night. Johnny Juzang showed no signs of the sprained ankle he aggravated against Michigan State on Thursday night, leading the 11th-seeded Bruins with 27 points on 10-of-16 shooting, while Jules Bernard added 16 and Jamie Jaquez Jr. had 13 points and eight rebounds.

The Bruins will play the winner of Abilene Christian-Texas on Monday.

UCLA appeared to be safely in the tournament at the end of last month, only to put itself squarely on the bubble with those four consecutive losses. Granted, they all were to NCAA Tournament teams, and the Pac-12 is looking better and better with each day. But the Bruins had blown second-half leads in each of those games, and there was little reason to be assured they’d turn things around if they made it to Indianapolis.

Tyger Campbell and the Bruins are headed to the second round. (Photo: Patrick Gorski, USA TODAY Sports)

Sure enough, the Bruins fell behind by as much as 14 in Thursday night’s First Four game against Michigan State, and trailed by five with 90 seconds left. But with Jaquez leading the way, they forced overtime and then held off the Spartans.

There was no need for any rally against the Cougars, who trailed the entire game. Juzang, whose status was in doubt because of the sprained ankle he’s been nursing all month, started fast and BYU could never catch up. Juzang had 19 points on 8-of-11 shooting in the first half, including 3 of 4 from 3-point range. UCLA shot 60 percent overall from beyond the arc.

Alex Barcello and Brandon Averette combined for all but one point as BYU opened the second half with a 12-5 run that cut UCLA’s lead to 43-39 six minutes in. But UCLA quickly righted itself, and BYU never got close again.

Once believed to be a quick out, UCLA is proving surprisingly resilient.